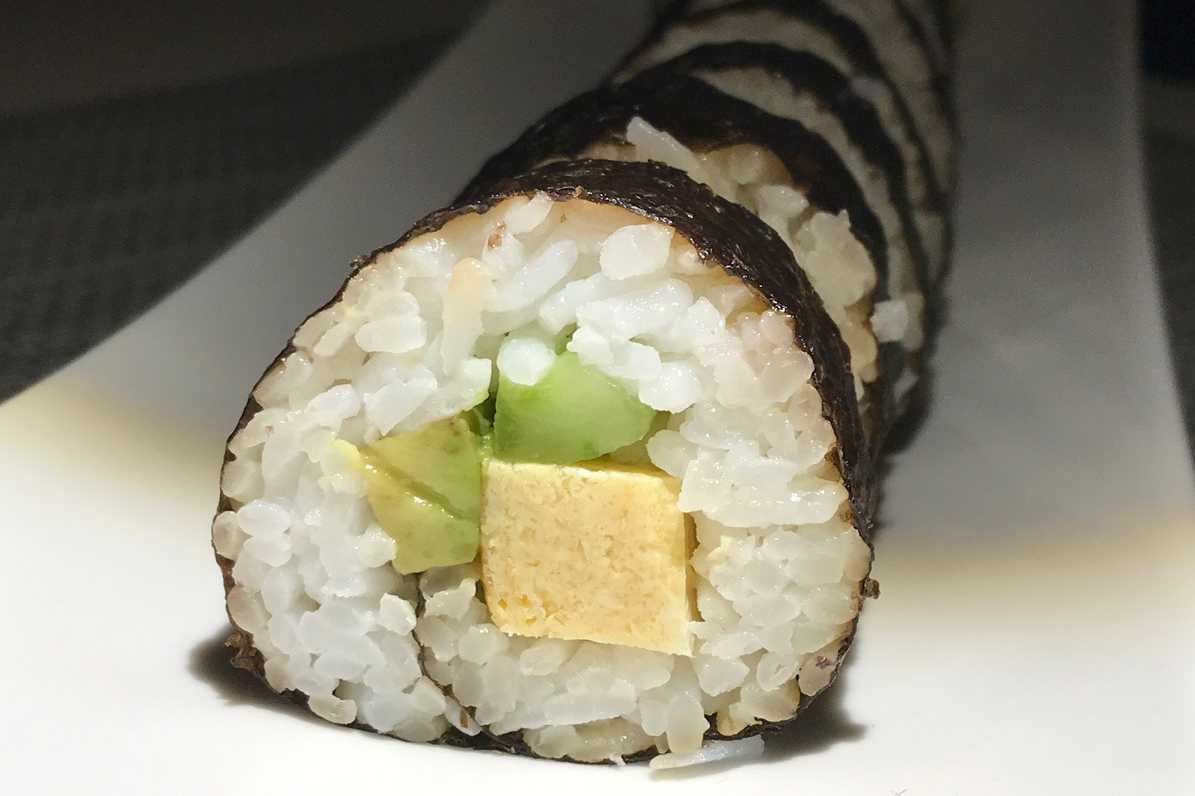 So, you made some sushi rolls, and you are now ready to cut them.

Now, you might ask: how much sushi is in a roll? You could eyeball it, but that could lead to a disaster! Your perfectly made sushi rolls could open up and spread out. We do not want that, no.

You do not have to worry, though. We have the answer to this question. We will be answering this inquiry, and we will be letting you in on so much more today!

We have tons to talk about, so let’s not delay this anymore. Let’s get right into it now!

How Much Sushi Is in a Roll?

There are different types of sushi. We have the nigiri, the temaki, the maki, and the uramaki.

Nigiris are not rolls, so we will not delve too much into them. However, you do not have to worry. We will briefly talk about how much sushi you can get with this type.

On the other hand, temakis are rolls. As you will see later, though, it is not the roll we want today. We will not delve into this sushi too much too. However, again, you do not need to worry. We will still talk a bit about it.

Makis and uramakis are rolls, and these are the rolls we will be focusing on today.

How Much Sushi Is in a Nigiri? Generally, a nigiri is a sushi made up of rice and a topping.

There is rolling with this sushi, alright. However, as you will see in a bit, this sushi is still not a roll, and you will only get one sushi when you make one of it.

How Much Sushi Is in a Temaki? On the other hand, we have the temaki sushi.

The temaki sushi is also called the hand-rolled sushi. As you can get from its name, the temaki is a type of sushi roll. If you remember, though, we said it is not the roll we want to focus on today.

Generally, you get a temaki when you wrap some nori like a cone around some rice and choice fillings. You could say it is similar to how one makes shawarma. Additionally, you also eat it similarly.

As you can guess, a temaki sushi might be a roll, but you only get one when you make one of it.

How Much Sushi Is in a Maki? Over here, we have the maki sushi. If you are a sushi lover, you might be quite familiar with this one. This type of sushi is one of the types we will be highlighting today.

Generally, you get maki sushi when you wrap some rice and choice fillings with some nori. However, unlike the temaki sushi, you do not role this type of sushi into a cone.

Now, when you make this roll, often, it is not eaten like how one would eat a temaki. So, when you make some maki, you end with a few pieces. With a maki, you get around six to eight bits with each roll you make.

How Much Sushi Is in an Uramaki? Next up, we have the uramaki. The other roll we are focusing on today.

You are likely familiar with this one too. It is pretty similar to a maki. You could say it is an inside-out maki. If a maki has the nori outside, an uramaki has it inside.

Like the maki, you will also end with six to eight pieces when you make this roll.

How Do I Cut a Sushi Roll in 8 Parts?

Now we know how much sushi you get when you make each type. Next, let’s discuss how you can turn your rolls into six or eight parts.

First, you have to ensure you have rolled your rolls tight. Otherwise, your sushi roll might open up and spread out when you start cutting it.

Next, you want to cut it in the middle. If this is the first time you are doing so, you might have trouble locating the median.

However, you do not have to worry. It is alright. With some practice, you will likely get it. For now, try finding the middle as best as you can.

After the cut, you should have two equal or almost equal parts. Here, you want to put them next to each other and make another cut in the middle. Repeat until you get your desired number.

If you have rolled your rolls tightly, you should be able to get six to eight rolls with no problem.

If this is the first time you are doing this, you might want to opt for makis first. They are easier to cut and maintain the shape of, than uramakis that have the rice on the outside.

You can also try cutting your roll up as if you are cutting thick slices. However, many do not go with this method.

That is because it is more likely to get uneven pieces this way. If you’re making sushi for yourself and find this method easier, you can go with this method instead. You can indeed cut up a sushi roll in any way you want. You can cut it up to more than eight pieces or cut it to less than six pieces. Still, there is a reason you might want to follow the suggested number.

The suggestion is to only have one to three pieces at a time. Generally, the portion of this serving suggestion is based on the idea that the sushi roll has been cut up into six to eight equal parts.

If you reduce the number, as you might expect, the portion of each roll would be larger. It might be a problem if you are trying to follow the serving suggestion or a diet. 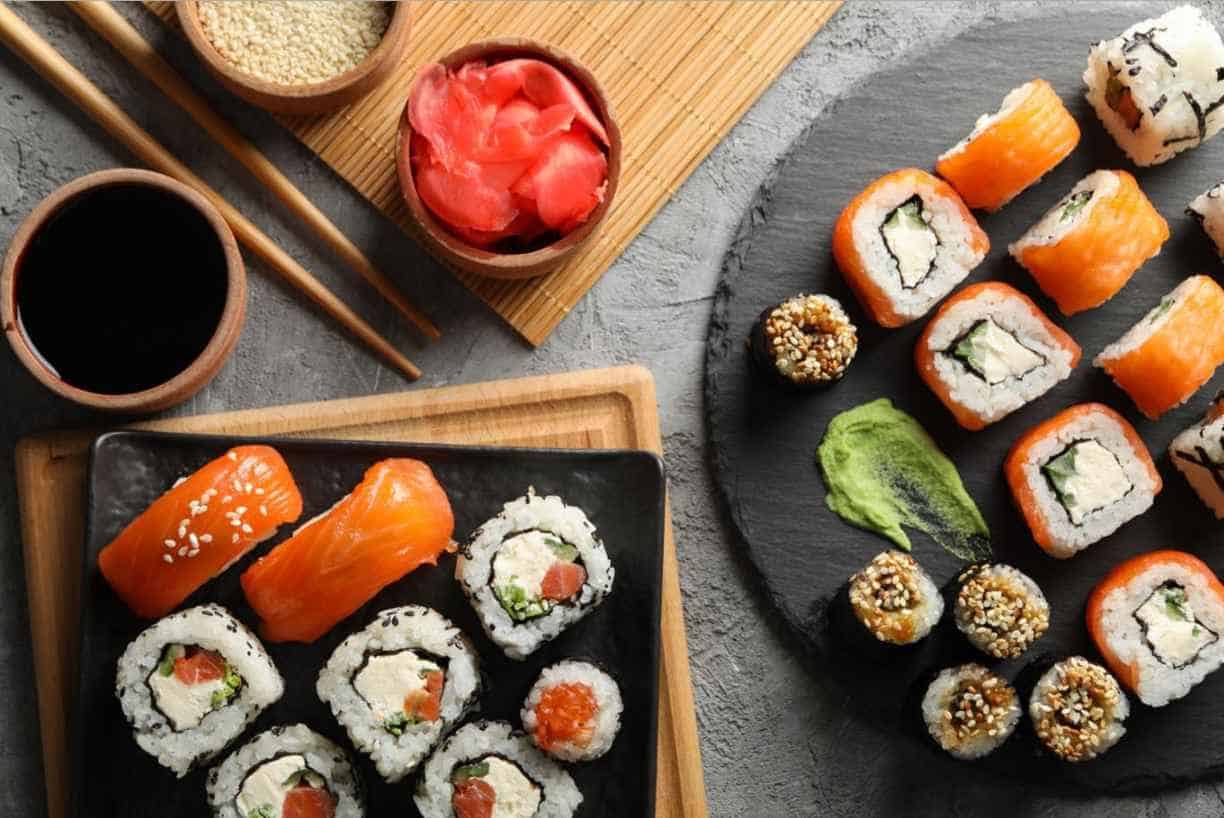 As we have said, you can cut up a sushi roll into more than eight pieces. However, as we have also said, it could make following the serving suggestion somewhat challenging.

That’s not the only reason, though. You also don’t want to cut your rolls into more pieces because it might ruin the sushi.

The sushi roll could open up and spread out if you try to make slices that are too thin. Additionally, if you make thin slices, you might not be able to taste the full flavor of the sushi.

Sushi Roll Recipes to Try Out

You now know how much sushi is in a roll. We have also shown you how to cut your rolls into six to eight pieces. Well, now it is time to practice cutting some sushi rolls!

How to Make California Rolls

First up, you might want to go with something familiar. In that case, maybe we can interest you with some California Rolls? It only needs a few ingredients. It is easy to make. Also, it is undoubtedly a tasty treat!

How to Make Rainbow Rolls

On the other hand, maybe you are feeling a little adventurous? Well, you might want to try making some Rainbow Rolls then! You can head on over to IzzyCooking to get the recipe for this colorful and flavorful sushi.

How to Make Dragon Rolls

Is the Rainbow Roll too much? Well, maybe you would like some Dragon Rolls instead? You can head on over to The Kitchen Community for its recipe then!

How much sushi is in a roll? Hopefully, you are not wondering anymore!

Today, we talked about the different types of sushi and which ones are and are not rolls. After that, we discussed how much sushi you could get when you make each one.

We learned that a nigiri is not a roll, and you only get one of it when you make one of it. After that, we discussed the temaki.

Next, we discussed how you could cut your sushi into six to eight parts.

Finally, we showed you some sushi roll recipes you can try while you perfect your sushi roll cutting skills!

We hope we were able to answer this question. If you have any other questions or concerns like this one, feel free to take a look at our other discussions!