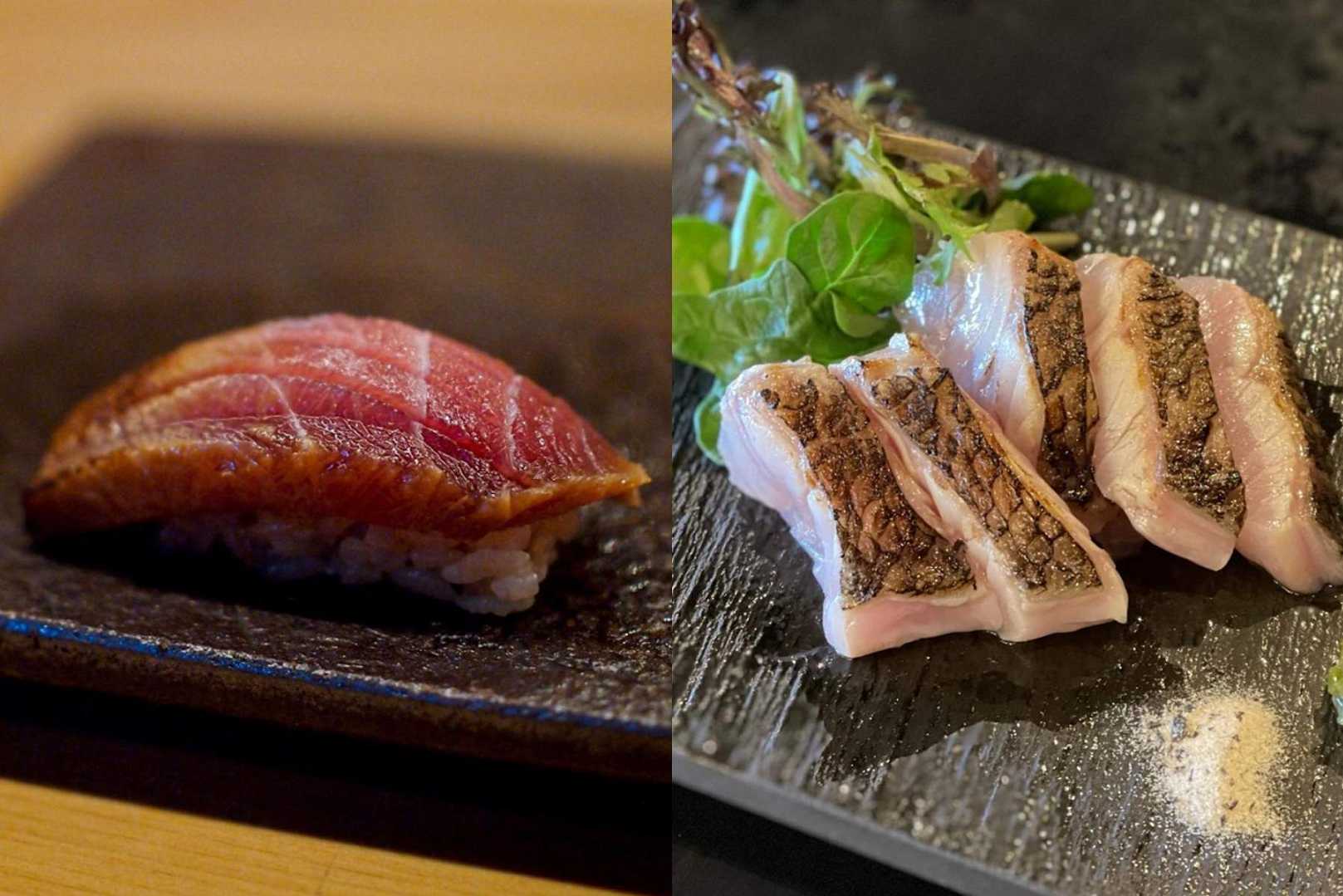 Nigiri and sashimi have been a staple in many Japanese houses and restaurants. They are often compared and get used interchangeably due to their various similarities.

However, nigiri and sashimi are unique in their particular ways. In this article, let’s tackle the differences between nigiri vs. sashimi. Nigiri is a type of sushi characterized by its lack of dried seaweed sheet of nori compared to the maki roll that is often the most recognized sushi worldwide.

Nigiri sushi is usually made with vinegared rice with a hint of sugar and topped with raw or seared seafood such as salmon and bluefin tuna. The dish is often accompanied by ginger and soy sauce as a palate cleanser.

It’s one of the most popular types of sushi in America. However, it’s also the most inaccurate one of the original maki rolls. The term ‘nigiri’ means two fingers because you need to press down your two fingers when making nigiri sushi.

Nigiri is often served chilled or cold. The high-fat content of the fish is a perfect accompaniment to the tangy and sweet flavor of the rice. They are often described as melt-in-your-mouth dishes. Sashimi differs significantly from nigiri since it’s not a type of sushi. For a dish to be considered sushi, it must be accompanied by rice which sashimi does not have.

Other nearby Asian countries also have sashimi as a part of their cuisine.

Sashimi is thin slices of fish, meat, or other types of seafood such as octopus. Its name came from ‘sashimi,’ which means pierced meat in Japanese. Different types of non-seafood meat are also used in sashimi, such as chicken and horse. 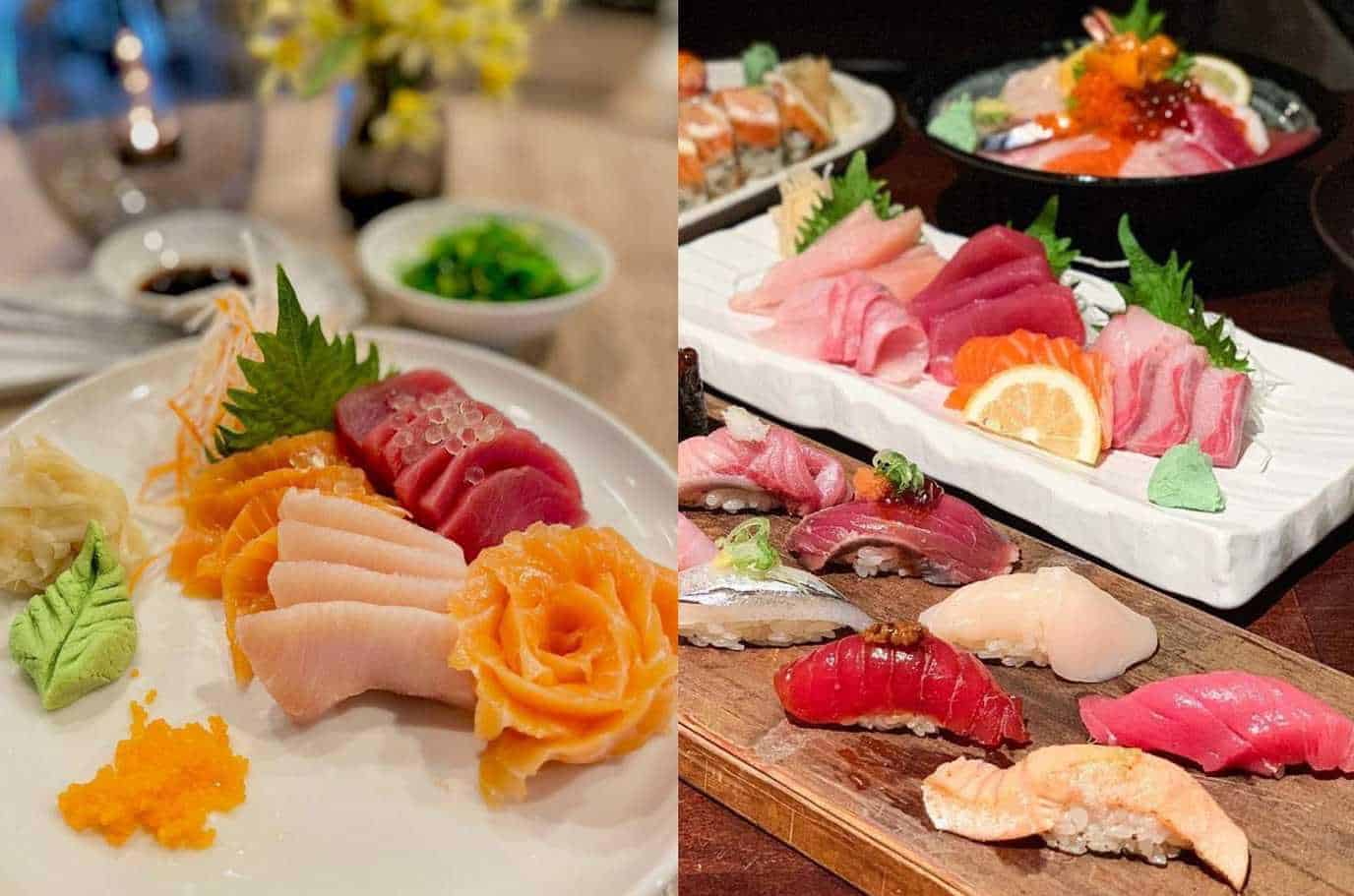 Here is a quick comparison chart to make the differentiation and similarities easier for you to see. Read below to see a more comprehensive explanation for these differences and similarities.

What are the Similarities Between Nigiri and Sashimi?

Are you still confused between nigiri and sashimi? Well, you are not the one to blame. People often confuse the two as they have various similarities, such as:

Both are from Japanese Cuisine

One of the reasons that nigiri and sashimi get confused is that they both come from Japanese cuisine, and both have Japanese names.

For people that are not native to the culture, terms are often hard to memorize, so many people get confused with the differences between the two.

Both are Commonly Present in Japanese Restaurant

When nigiri sushi is present, it’s almost expected that sashimi is also on the menu. Most people are not familiar with the different terms can confuse people.

It’s no surprise that sashimi and nigiri are often served at Japanese restaurants as they have been a staple part of the Japanese food culture.

You Can Eat them Raw

Even though nigiri can be served seared, it’s mostly eaten raw. Sashimi, on the other hand, should always be eaten raw. The similarity of the raw aspect in both dishes seems to stand out, especially to those unfamiliar.

Since both dishes are primarily raw, they need to chill to ensure their freshness and quality. Most people can interchange the two as they can be very similar in their presentation.

As you can read, sashimi and nigiri can have a few similarities that get them interchange with each other. However, both of these dishes can and will offer their uniqueness.

They Have the Same Accompaniments

Most of the time, nigiri and sashimi have the same accompaniments, such as wasabi, soy sauce, and pickled ginger. Wasabi is mainly used to spice the dish due to its capsaicin and hot burn.

Soy sauce is a common accompaniment for many Japanese and Asian dishes. The tangy and saltiness can ring out the fresh and flavorful taste of the fish.

Soy sauce also lessens the fishiness that may turn off other people not used to eating raw seafood.

Pickled ginger is used to either clean the palate or taste buds between each bite or as a spice to combat the fishiness of the dishes.

What are the Differences between Nigiri vs. Sashimi? Even though nigiri and sashimi can be similar in many ways, here are a few factors that you can use to differentiate the two quickly.

One of the ways to quickly tell nigiri and sashimi apart is the rice. Since nigiri is a sushi type, it must always be with rice. Sashimi, however, is just eaten on its own or with different varieties of garnish and soy sauce.

It’s one of the most prominent ways to tell them apart. Nigiri has rice as a vital part of its dish, while sashimi must be without rice.

Although raw fish is commonly associated with both of these dishes, they can also offer other types of meat or seafood.

Besides raw fish, nigiri can also have raw or seared octopus, squid, or prawns as toppings. Seafood is the only type of topping that nigiri has. Sashimi can be any meat and is not limited to seafood.

Although sashimi and nigiri are commonly raw, some nigiri sushi is served seared. The searing is primarily done in fine-dining restaurants and is often a form of a contemporary twist to traditional sushi.

On the other hand, sashimi can’t be served cooked or seared. It’s a fundamental part of the dish that it must be served fresh and raw for the ultimate quality experience.

Nigiri is mainly served without any garnish. Often, soy sauce for dipping and pickled ginger is offered as a palate cleanser. Nigiri is frequently bought and sold as it is. The lack of garnish is due to the tangy flavor of the nigiri rice.

Sashimi has a more well-presented and packed garnish and sides such as toasted nori, daikon radish, shiso leaves, wasabi, and pickled ginger. Soy sauce is also served as an accompaniment, like with nigiri.

The Way of Eating

Nigiri is mostly eaten with hands or a chopstick. It’s commonly held in the rice part of the sushi not to ruin the fish topping.

Sashimi is eaten solely with chopsticks. Since the dish comprises thinly sliced fish and meat, using other utensils or hands to eat sashimi can ruin the food. The sharpness of utensils such as forks can tear the thin slices apart.

Nigiri vs. Sashimi: Which is More Expensive? Now that we know the common differences and similarities between nigiri and sashimi, let’s get into their price difference. Most of the time, sashimi is much more expensive than nigiri and a more challenging dish to make right.

Unlike nigiri, sashimi relies heavily on thin slices of meat to make it palatable and delicious.

Traditional sashimi also uses the old way of getting fresh seafood sashimi. Anglers will catch the fish using a spear and will fully submerge them in the water as they are caught.

This method ensures that the fish is of quality and fresh. On the other hand, nigiri could use any raw fish the chef wants. Sashimi is also harder to make as it needs meticulous storage and assembling process compared to nigiri.

The increase in garnish also adds to the price of the dish. Nigiri has little to no garnish accompanying it on the plate, unlike with sashimi, where garnishes are almost vital to the whole experience of authentic sashimi.

With that said, prices can vary from restaurant to restaurant. In some places, sashimi can be cheaper compared to nigiri. We are just taking the everyday prices between these two dishes.

Benefits of Eating Nigiri and Sashimi

Nigiri and sashimi have many beneficial factors for health and the body, especially if they are made with high-quality and fresh ingredients.

They are a good source of nutrients such as omega-three fatty acids and premium protein due to the fresh and raw fish or meat.

Since sashimi and nigiri are mostly eaten raw, there is little to no oil present in the dish. It’s considered chiefly good food for people undergoing weight loss as it has little to no calories.

Since they are served raw, get your nigiri and sashimi in trusted and certified restaurants. Eating improperly made raw dishes can cause many digestive problems and even larvae infestation.

Although there are many similarities between sashimi and nigiri, they can still stand out in their unique way. May this article about nigiri vs. sashimi help you in your next endeavors in Japanese cuisine.