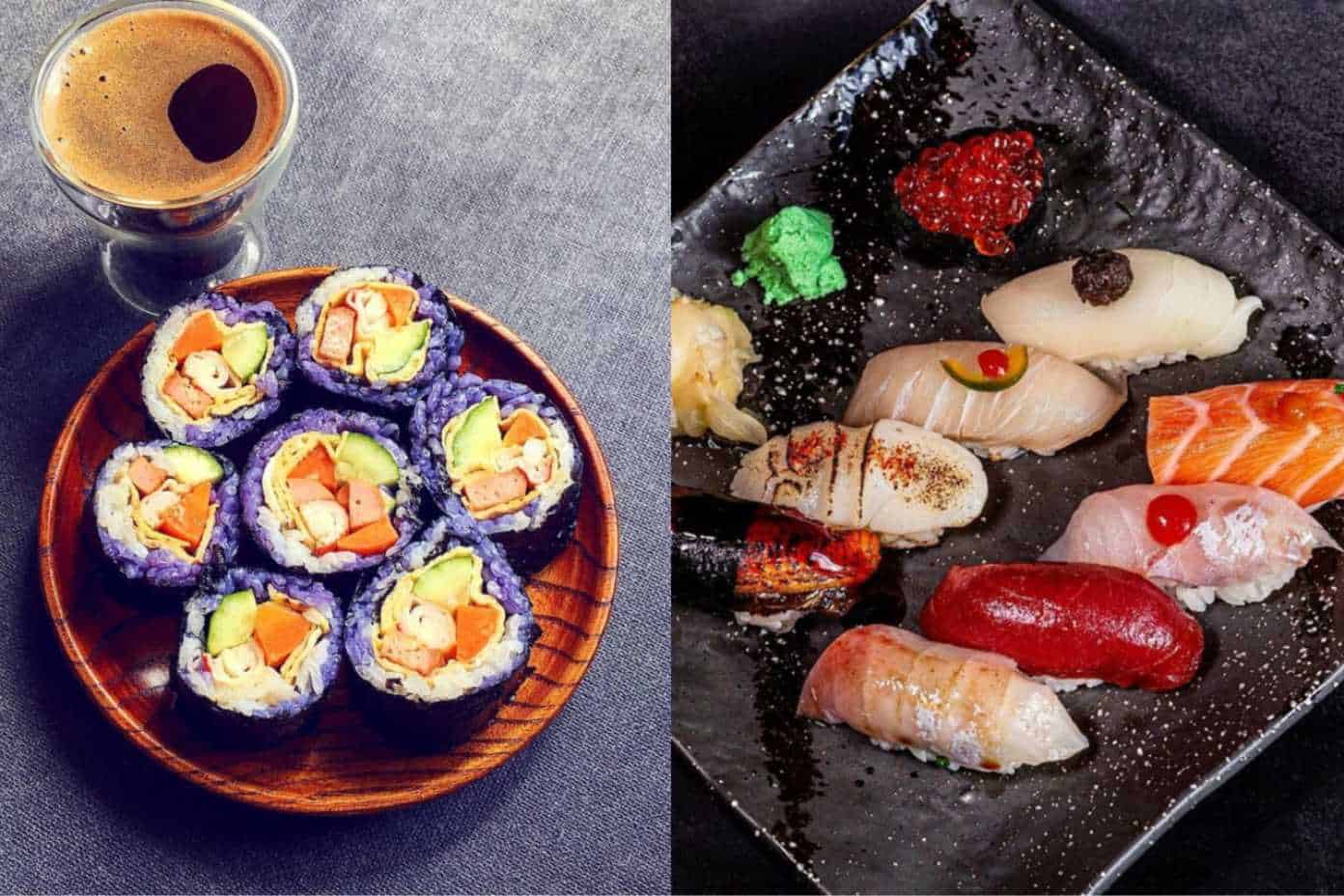 Going out for Japanese cuisine can be enjoyable. When looking at the menu, though, things might quickly become perplexing. Maki vs. sushi: can you tell the difference between the two? They have gained so much popularity today. If you’re not sure what the differences are, keep reading.

Fundamental Differences between Maki and Sushi Sushi is a well-known Japanese dish made with vinegared rice and additional ingredients like fish and vegetables. All sushi comes with rice and other components. But it is the rice, not the fish, that is referred to as sushi.

Sushi is a broad dish that refers to a variety of foods. Maki and nigiri are two of the most popular types of sushi.

Maki is a cylindrical variant of sushi with crispy seaweed wrapped around vinegared rice and some fillings. The fundamental distinction between maki and sushi is that maki is cylindrical, whereas sushi comes in various shapes.

The table below shows some essential distinctions between maki and sushi: Before discovering what maki is, it’s best to learn everything you have to know about sushi since maki is just a type of sushi. Sushi is a Japanese dish that combines vinegar-flavored rice with fish, veggies, and other components. You can make sushi with various ingredients and prepare it in different ways.

Rice is the key ingredient that all sushi has in common.  The sushi here refers to rice rather than fish. Sushi consists of two components: Shari and Neta. Shari is represented by the cooked rice, whereas the other ingredients represent Neta.

Where did sushi originate?

Interestingly, sushi does not originate in Japan. Instead, it comes from China, where they pickle fish with salt, vinegar, and rice on farmlands. Sushi became popular in Japan in the 9th century as a staple cuisine. Today, sushi has spawned many variations and has grown in popularity worldwide.

How is sushi made today?

Basic sushi consists of a tiny cut of fish wrapped in rice and then seaweed. Sushi frequently includes vegetables. Sushi relies heavily on rice. So, it would be best if you only use the highest quality sushi rice. You can serve it cooked or raw.

Because of technological advancements, people can now utilize robots to make sushi in large quantities. However, the most sumptuous sushi is hand-prepared.

Even if you are a chef or a beginner, you can buy professional sushi-making equipment for the most remarkable results. These kits come with everything you need to make perfect sushi rolls.

What are the different types of sushi? Maki or Makizushi is also known as “norimaki.” It’s a form of sushi made by meticulously rolling rice and toppings in a sheet of seaweed called “nori.” You’ll know more about maki later in this article.

Chirashizushi translates to “scattered sushi.” It is a bowl of rice topped with garnishes like cucumber, salmon, boiled prawns, squid, and shredded omelet.

You can easily buy chirashizushi across Japan. It’s available in food courts, convenience stores, and supermarkets.

Chirashizushi is frequently included as a bento box highlight or consumed as an independent meal due to its large variety of ingredients. Its beautiful, bejeweled appearance makes it a popular choice for special occasions. Inarizushi is labeled after Inari – a Shinto god thought to have a liking for tofu. It differs from the other variations because it does not contain any fish and has a sweet flavor.

Inari is a pouch-shaped piece of aburaage or deep-fried tofu cooked in mirin, dashi, soy sauce, and sugar. The seasoned pouch is usually stuffed with vinegared sushi rice to make a sweet, juicy, slightly sour dish.

You can also fill or top the pouch with other components like squid, mushrooms, cooked prawns, and chives. You can also add a shredded omelet. Inari-zushi is a popular bento item and finger food for parties and picnics because of its variability, portability, and ease of preparation. The sushi variant, narezushi, requires skinned fish preserved in rice and salt for months to years. Even though the rice was initially tossed before eating, narezushi is often considered the original kind of sushi.

Over time, the fermentation period reduces, allowing consumers to eat the rice with the fish. It gave rise to more current forms of sushi. However, narezushi is becoming less popular because of its exceedingly intense flavor. Nigiri is the first form of sushi most are familiar with. The name edo-mae references the city where it was born, Edo, now known as Tokyo. You can prepare this sushi variant with a hand-pressed rice cylinder topped with various seasonings. Toppings include meat, omelet, seafood, and veggies.

The fish can be pickled in vinegar in soy sauce or grilled with a blowtorch.  A simple marinade coating and garnishes such as chives or shredded onions are optional.

What fish can you use to make sushi?

To make sushi with fish, you can choose from the following fish varieties:

What shellfish can you use to make sushi? Maki is a type of sushi. It’s also called norimaki or rolled sushi. It has a cylindrical shape. Norimaki is a combination of two Japanese words: “maki,” which means “to roll,” and “nori,” which refers to the nori seaweed sheet.

You can layer raw or cooked fish, vinegared rice, and veggies on a seaweed sheet before wrapping it into a cylinder. You can also wrap it in a cucumber, soy paper, or thin omelet. You may also add cream cheese to the stuffing.

Maki sushi is the most fantastic choice if you are starting in the world of sushi. It is the most basic of sushi rolls. You can split these sushi rolls into smaller round portions for easy eating.

How is maki made today?

To make the best-shaped sushi rolls, you’ll need to follow a few procedures. First, you must distribute the cooked rice in a sufficient amount.

Then arrange the components in an amount that is neither too many nor too few to ensure that you can roll them. To make rolling more manageable, you’ll need a bamboo mat.

Where did maki originate?

Maki is said to have initially appeared in the Edo period, in the 18th century. Many believe it originated in Edo, now Tokyo. It swiftly expanded throughout Japan, with different regions adopting their unique maki sushi forms.

Narrow sushi rolls with merely one ingredient were famous in the Kanto region, home to Tokyo. In contrast, the Kansai region, which includes Osaka, popularized rolls with more toppings. Regional maki varies due to access to various ingredients and cultural factors.

What are the different types of maki?

Maki can be classified into numerous types based on the thickness of the roll and the filling. Some of these varieties are listed below. Uramaki is a medium-sized round piece with rice rolled on the outside out. Therefore, it has a distinctive look. It is commonly consumed outside Japan.

Uramaki usually has two or more components. Fillings can include premium canned tuna, crab sticks, salmon, and veggies. You can also top it with sesame seeds. The tiniest maki, hosomaki, comes with a thin shape made feasible by one filling aside from rice. The filling could either be veggie or fish. Depending on the ingredients, it can have various names. For instance, it’s called Tekka Maki if it has tuna filling.

Hosomaki is like fast food in Japan, marketed at supermarkets and convenience stores and supermarkets. It is tiny, about 1 inch in diameter; therefore, it is easy to consume. The cone shape of this hand-rolled sushi sets it apart. It does not require the use of a bamboo mat to form.

Temaki’s shape makes it popular to consume sushi with friends and family in Japan since it doesn’t require additional equipment. You can stuff this maki variant with various ingredients like fish, vinegared rice, and veggies. Futomaki is a thick sushi roll with a variety of items in addition to rice. It’s about two inches. Seafood, such as eel, crab, shrimp, tofu, egg, and veggies, are popular fillings.

Ehomaki is a popular futomaki served during Setsubun, a festivity that occurs just before the beginning of spring.

Can you now distinguish maki vs. sushi? Your favorite Japanese restaurant will have a variety of sushi to choose from, including maki.

The shape is the primary distinction. Maki is a circular sushi variation, whereas sushi can come in several forms. Maki and sushi are typical Japanese dishes that will surely excite your palate.