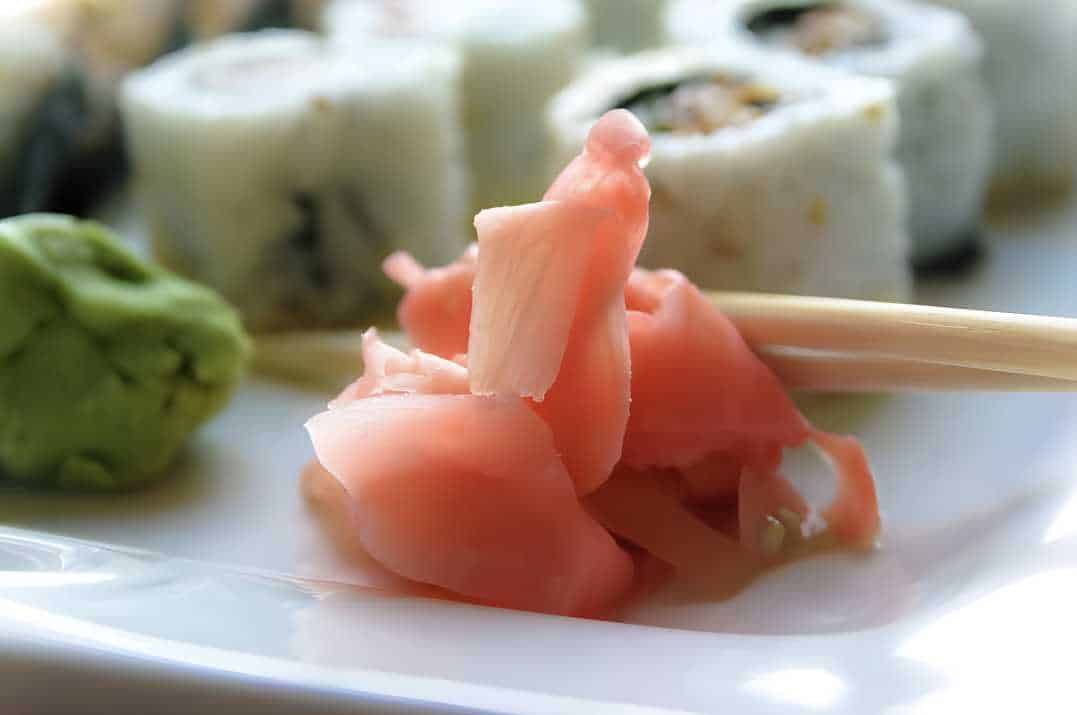 Sushi ginger or gari is a common accompaniment on every sushi platter. Sushi ginger is commonly used as a palette cleanser. The pickled ginger is known for its distinct pink tinge that some people might ask: Why is sushi ginger pink?

What is Sushi Ginger? 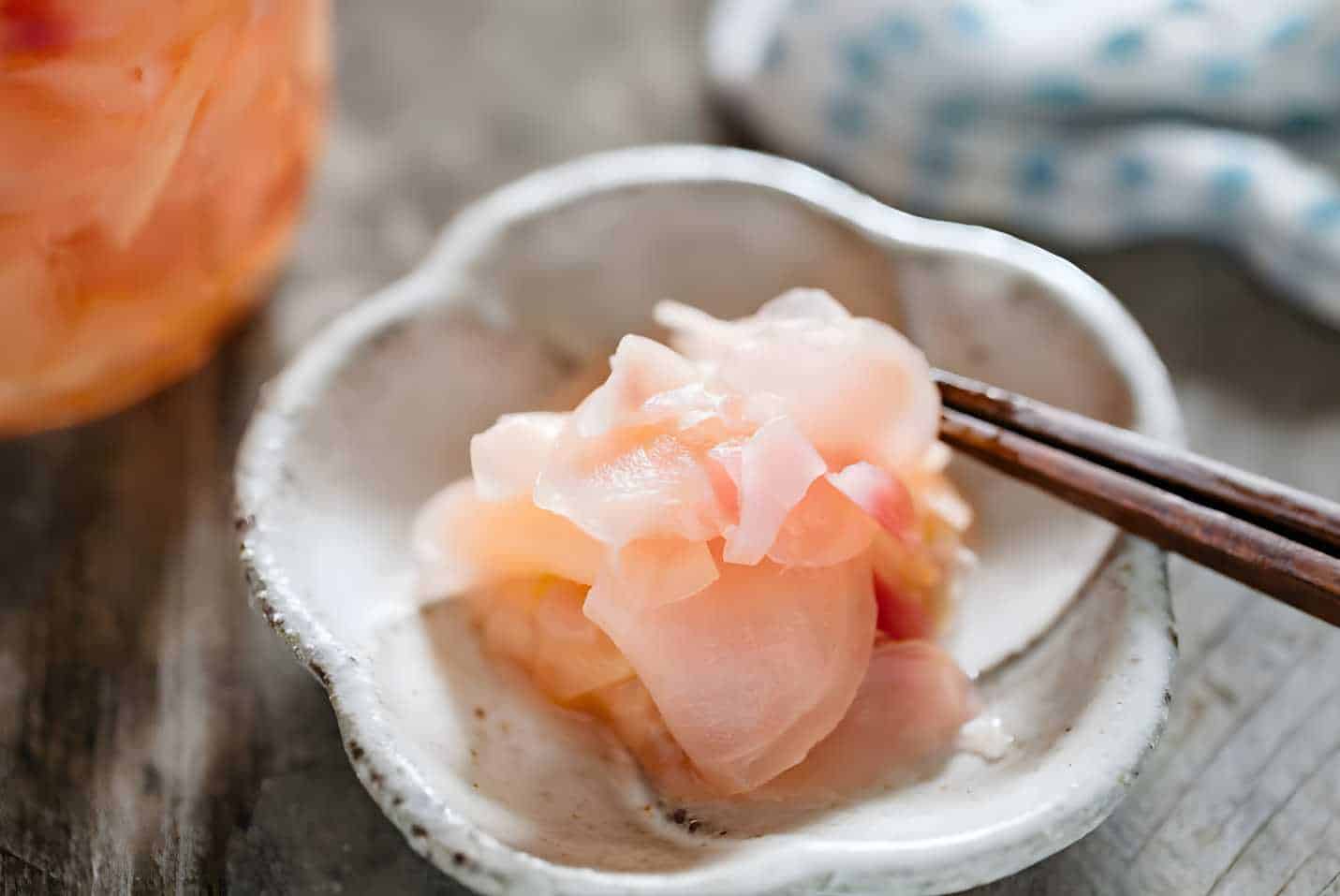 Sushi ginger, pink ginger, or gari is a staple part of eating sushi. It’s a traditional accompaniment to help cleanse the palette between different sushi. The pickled ginger also helps elevate the seafood in sushi dishes.

The preparation for making gari is straightforward. Thinly sliced young ginger is pickled with vinegar and sugar. The gari is kept in a jar for pickling.

Sushi ginger is commonly consumed before, between, or after eating sushi. In Japanese tradition, it’s believed that pickled ginger keeps the flavors pure by cleaning the palette. It’s recommended to take pickled ginger if you switch between different sushi types.

The pickled ginger has an acidic spiciness which helps alleviate the strong flavor of seafood. The natural juicy sweet taste of the gari balances out the strong fishy taste of the raw fish.

Why is Sushi Ginger Pink? 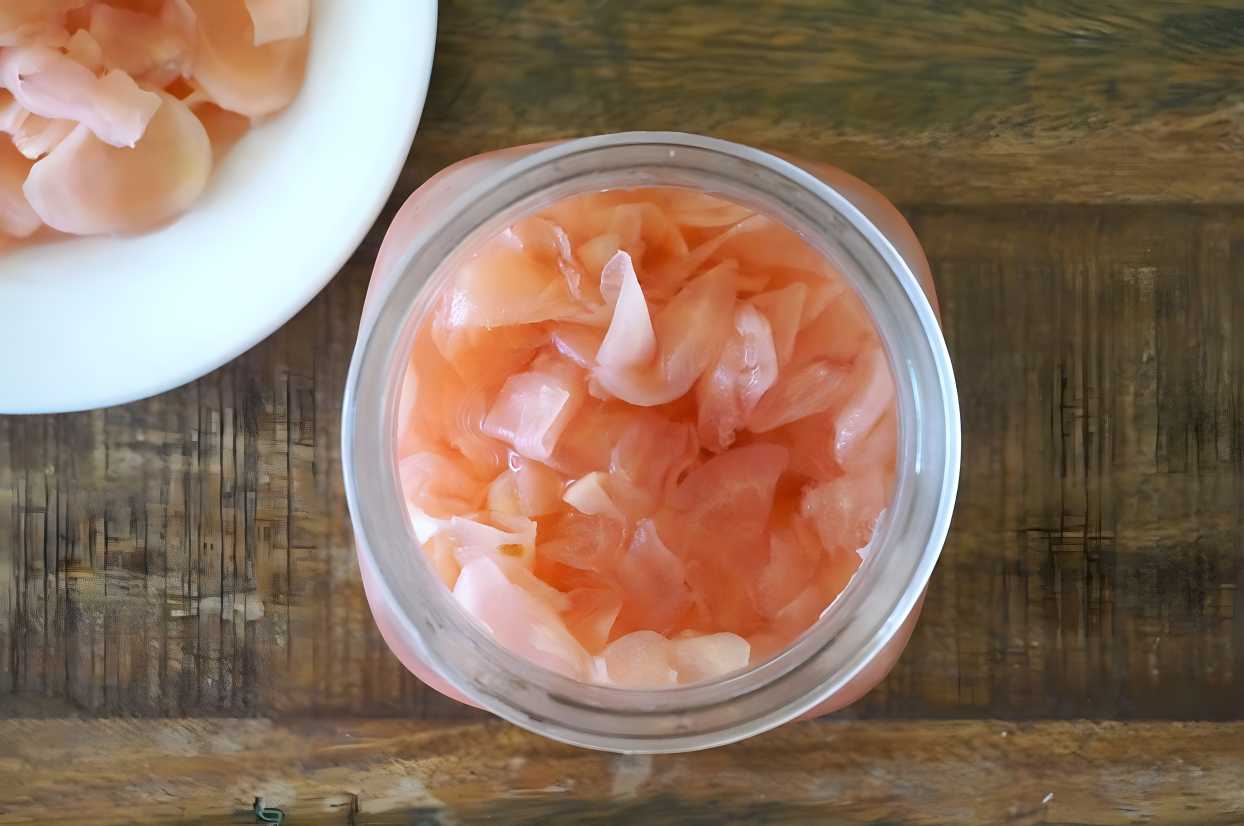 Sushi ginger is pink due to the pink pigment at the roots of young ginger. Gari is commonly harvested in summer when gingers are relatively young. The pigments are mixed within the pickle brine by slicing and pickling the ginger.

As the ginger gets more time pickling, the brine will soak up the pigments from the roots of the ginger. The pickling process gives the sushi ginger its distinct pink color.

However, most manufactured sushi ginger is mixed with E124 or beet juice. Since most factories use mature white ginger, E124 is needed to give the sushi ginger its pink color. Gari is only available during the summer, so having an authentic supply year-round is unattainable for manufacturers.

Most sushi ginger not made in Japan also needs beet juice to have a distinct pinking color. Some gingers don’t have a pink tint even if they are young. By adding E124, it gives the illusion of authenticity.

Not all restaurants serve pink sushi ginger. Some have the standard white or cream-colored gari. Most of the time, the change has minimal effect on the dining experience.

The pink tint of authentic sushi ginger can also be lost over time. It can develop a cream or off-white color even if made with a natural young Japanese ginger. The change in color does not affect the taste and texture of the gari.

When the pink tint of the gari is gone, the pickled ginger will turn to white, yellow, then brown. The discoloration is also one of the reasons why chefs and sushi bar owners put pink dye in their pickled ginger. Having a brown and discolored ginger is unappetizing for most people.

Why is Pink Ginger used for sushi? 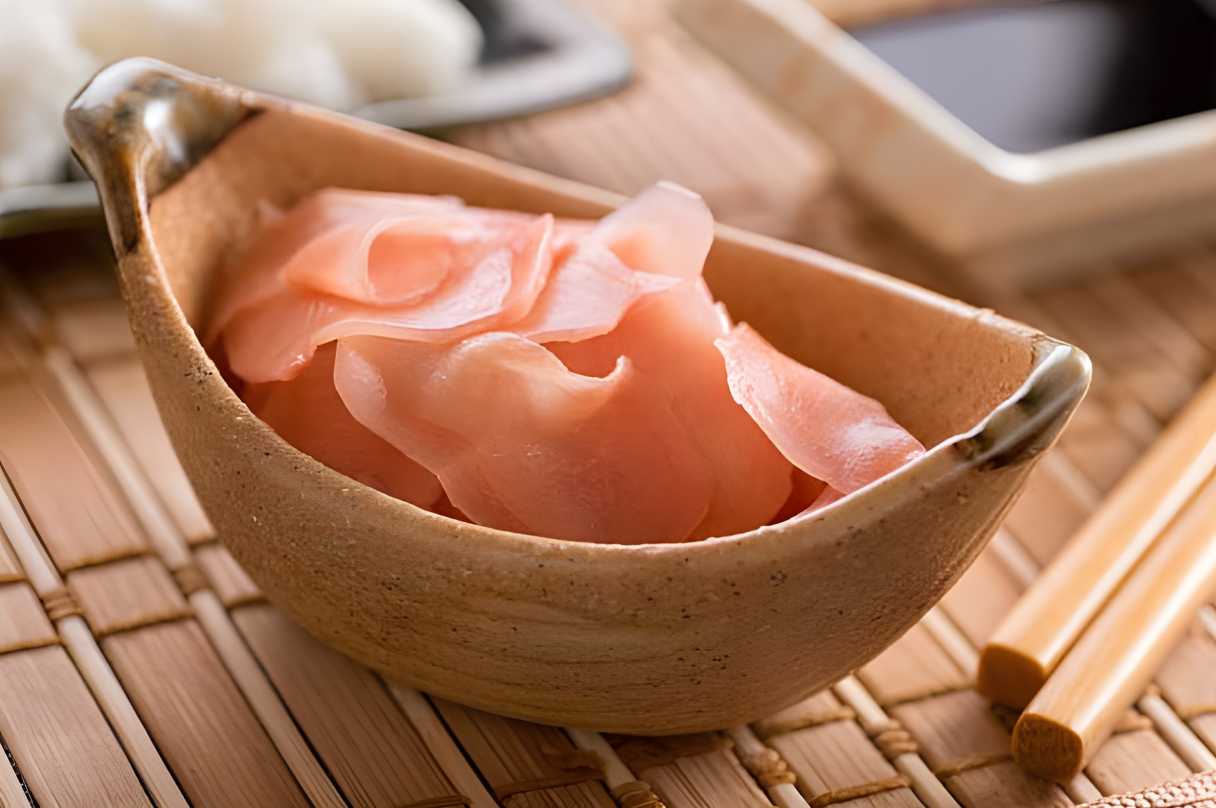 Pink ginger, also called red ginger, is naturally grown in colder and less humid climates. Most mountains and farms in Japan produce pink ginger during summer. In America, South Florida is one of the leading pink ginger suppliers.

The pink ginger will bloom around the end of spring and early summer. It needs constant watering as the plant is prone to drying out. However, one can plant and harvest pink ginger at home.

During early summer, pink ginger is widely available in Asian supermarkets and stores. If you are looking forward to trying it out, make sure that you find it in early summer for a lower price.

The pink ginger is sought after by Japanese restaurants and sushi bars for its juicy and tender texture. Pink ginger has a milder spicy taste and a more subtle sweet flavor than white ginger. It’s also less intense when it comes to ginger aroma.

When looking for pink ginger, make sure to look out for the roots. The roots of authentic pink ginger have a slight tinge of pigment. Only the young ginger can be helpful when the pink ginger is for pickling or gari.

When the pink ginger is mature, the skin is more rigid and harder to chew. The flavor of the mature ginger also gets more intense.

The robust flavors can overpower when used as a sushi accompaniment. The taste can be powerful enough to get in the way of the natural flavors of sushi.

Why is Pickled Ginger Eaten with Sushi? 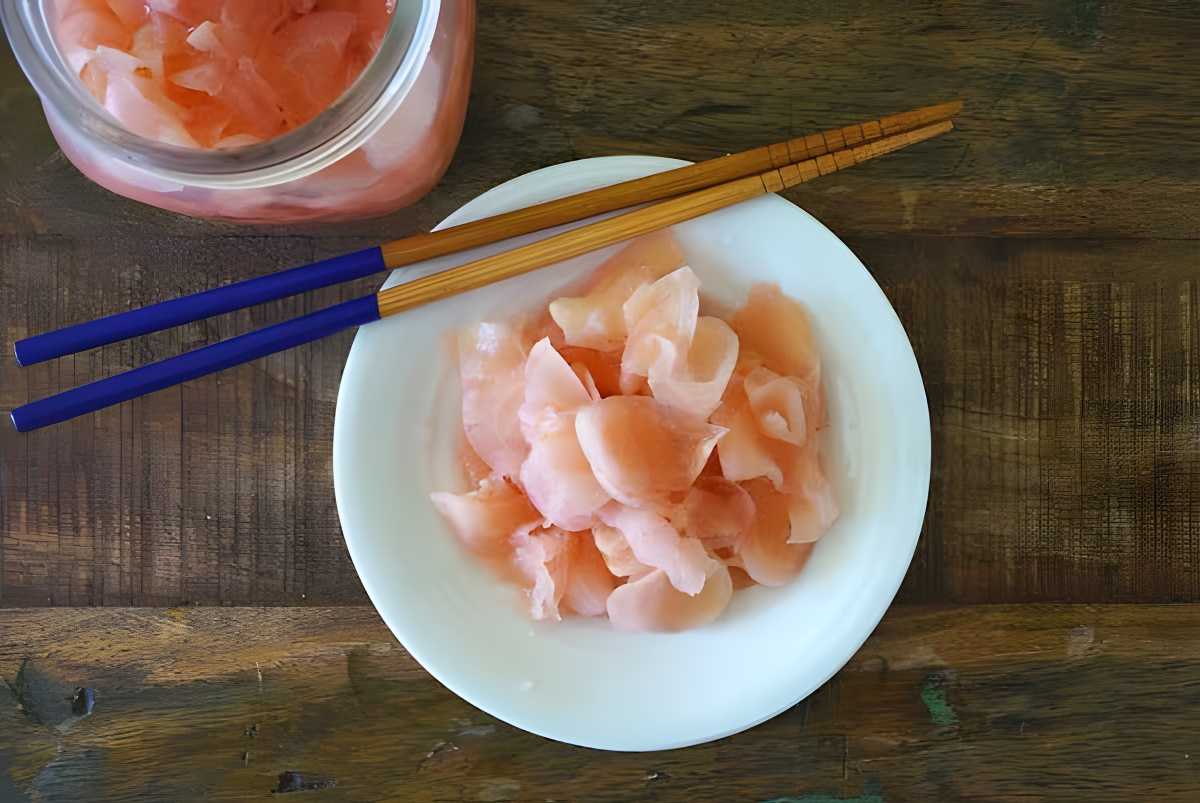 Pickled ginger is mostly for palate cleansing. However, in ancient times, the anti-microbial properties of gari are its primary purpose.

Traditional sushi often uses raw seafood as a primary ingredient. By having pickled ginger as an accompaniment, bacterial contamination is lowered. The sushi ginger helps remove and kill the bloodborne parasite from the raw fish.

Since the medical and agricultural industry knows more about bacteria living in raw seafood, pickled ginger is now commonly used for palate cleansing. It’s recommended to eat small slices of pickled ginger between each sushi batch.

Along with the health and anti-microbial benefits, pickled ginger also heightens the sushi eating experience. It has a sweet aftertaste and mild-ginger flavor, a great accompaniment to seafood. It offsets the savory flavor of raw seafood with a more mild and smooth taste.

Is Pickled Ginger Good for You?

Nutritional facts of one hundred grams sushi ginger according to USDA.

Sushi ginger is a relatively healthy accompaniment to sushi. It’s deficient in calories but rich in potassium and magnesium. It also has small doses of vitamins such as vitamin C and vitamin B6.

Pink ginger is also filled with antioxidants which can help improve the immune system. The vinegar brine also has anti-bacterial properties.

Most authentic sushi ginger does not come with any preservatives. Pickling the ginger is enough to keep it free from bacteria and fungi. As long as the jar for pickling is shut tight, the pickled sushi is safe to eat and store.

Sushi is good for you for so many reasons. The natural anti-microbial properties of the gari help lower the risk of foodborne diseases. This health benefit is significant as most traditional sushi contains raw fish.

What is the Difference Between Pink Ginger vs. White 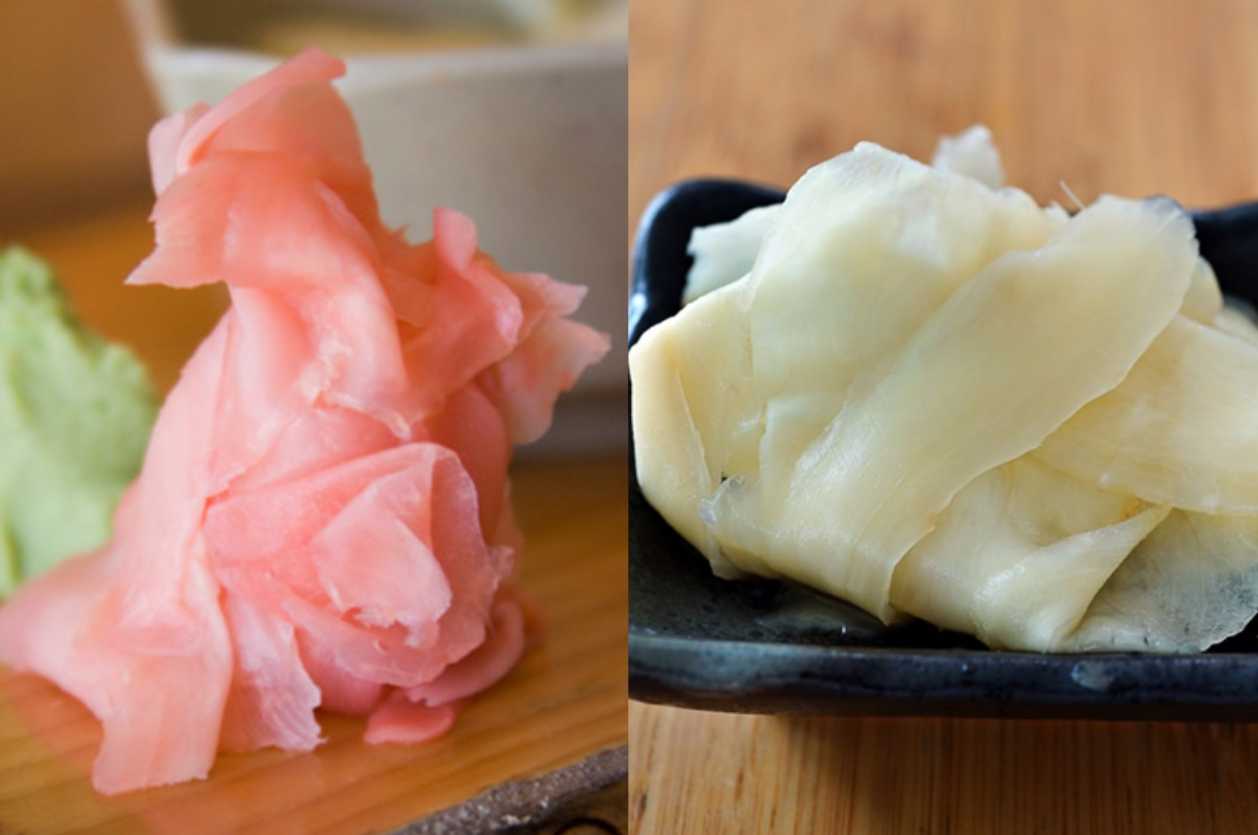 Both pink and white ginger is available in Japan and United States, but what are their differences? Let’s find out which is the perfect ginger accompaniment for your sushi.

Pink ginger is the one commonly present as a gari in restaurants. The pink ginger is known for its mild ginger flavor and sweet taste. It’s also very soft and tender than white ginger, so it’s recommended for sushi garnish.

Some people might get the idea of using white sushi as their pickled ginger. It’s more accessible and cheaper than pink ginger. With that said, are white ginger good as a gari?

White ginger is not recommended as a sushi garnish. It has a woodier and more rigid texture, unlike the tender and juicy pink ginger. Due to its properties, white ginger is beneficial for cooking.

It has a more robust flavor, so a tiny amount is enough for a batch of broth. You can commonly see white ginger in fish and seafood dishes. Its intense flavor combats the strong fishy taste of the seafood. 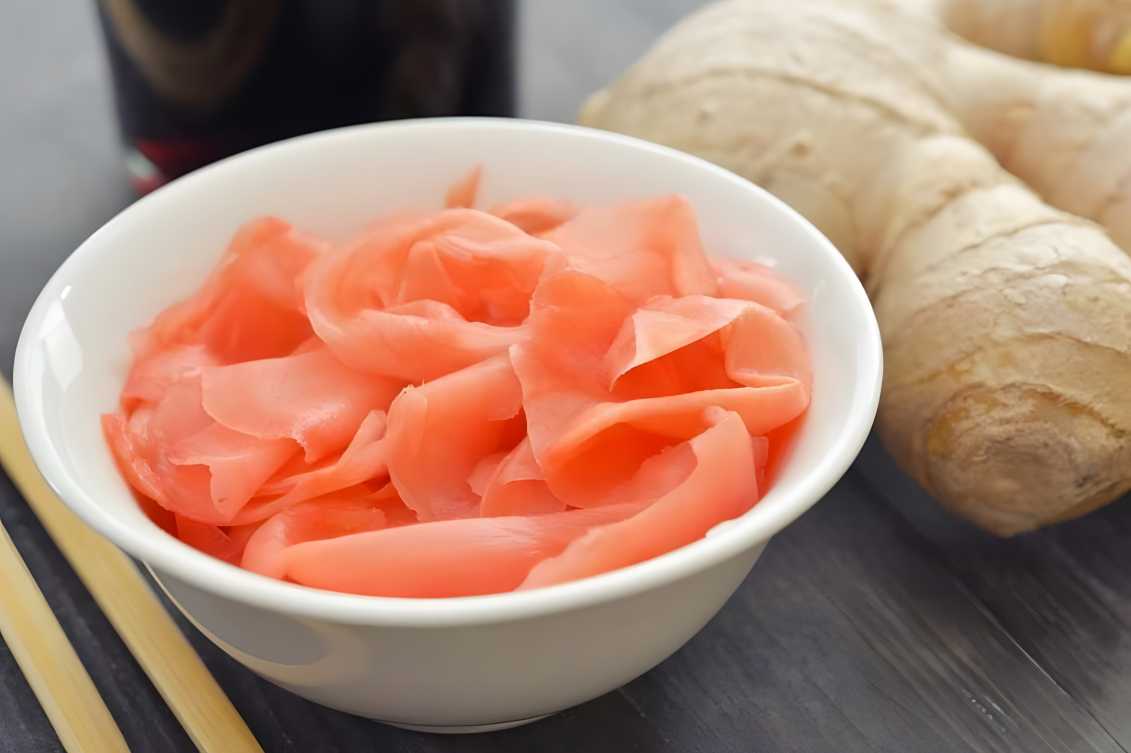 Pickled ginger contains many benefits not just for your health but also for your dining experience.

It’s a great and tasty way to combat the bloodborne illnesses from raw seafood. It also serves as an antioxidant to fight off disease.

The anti-microbial properties of the pickled ginger not only protect your immune system and stomach. It also improves the health of your colon. If you are a huge fan of sushi, this benefit is handy.

Most of the time, eating raw seafood exposes the colon to many harmful bacteria and parasites. Eating healthy accompaniments such as pickled ginger lowers the risk of getting sick from eating sushi.

Elevates the Flavors of the Sushi

As stated above, pickled ginger can also be a palate cleanser when eating sushi. It elevates the flavor by providing a sweet and mildly acidic taste to the plate. The ginger aroma also lowers the fishy flavors of the sushi.

Eating pickled ginger between different sushi varieties reset your taste buds for the new flavor. It helps you enjoy the different types of sushi in one sitting.

There are many reasons why is sushi ginger pink. It can be from dye such as E124 or natural pigments from pink ginger. Whatever reason it is, pickled ginger proves its worth as a sushi accompaniment with its health and fine-dining benefits.