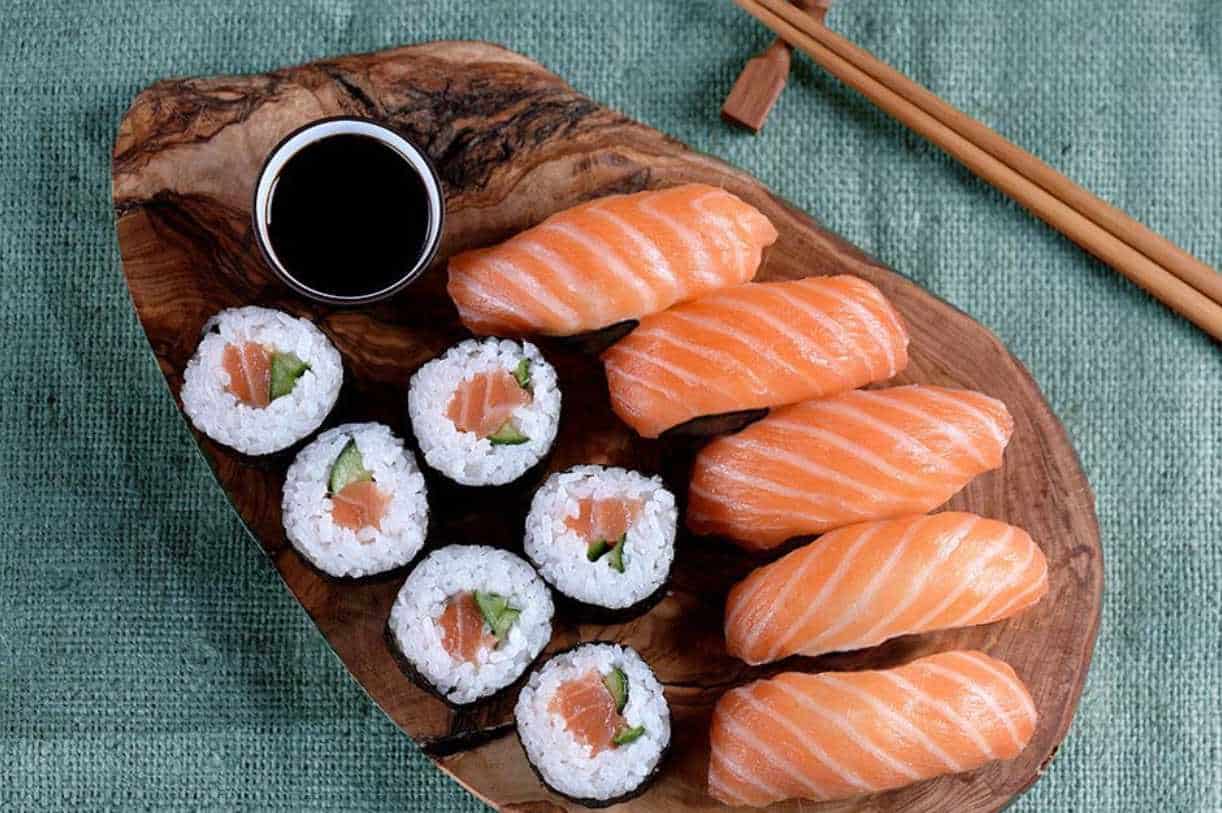 If you’ve been to a sushi restaurant, you’ve probably enjoyed the tender flesh of delicious salmon. Salmon is a popular fish used in sushi, sashimi, and other dishes. But what kind of salmon is used for sushi?

This article will walk you through everything you need to know about salmon and sushi. We’ve laid out all information about these two for you! 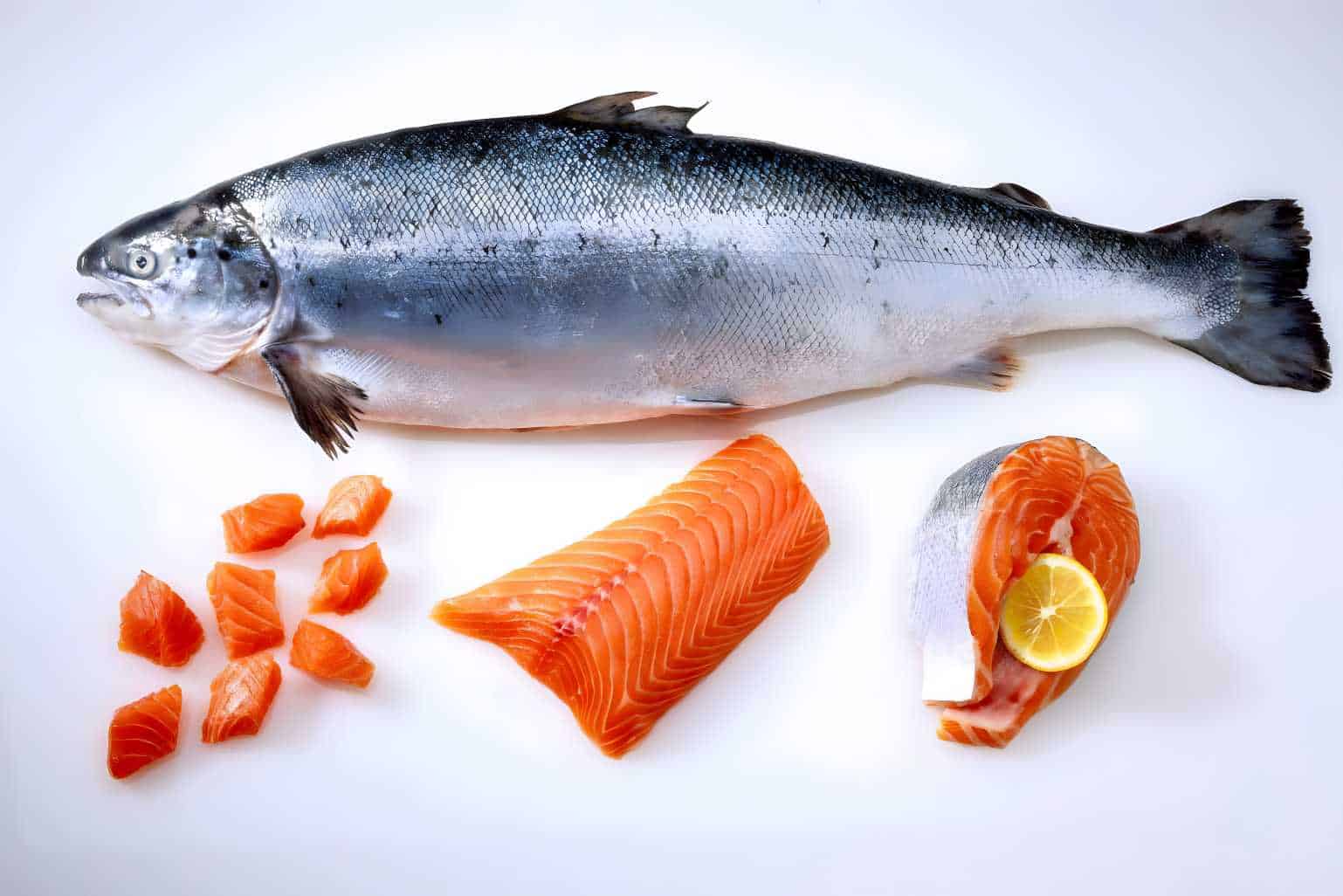 Salmon refers to a family of fish that includes several species. The most common type used for sushi is called sockeye salmon. These are medium-sized fish with pinkish flesh and red spots on their skin.

There are many different types of salmon available for purchase at grocery stores, but wild Alaskan salmon is considered the best source for eating raw.

The fish is generally considered healthy and nutritious, but it’s essential to eat the right kind of salmon. The types of salmon differ in their unique flavor, texture, and color.

Salmon is a fatty fish rich in Omega 3 fatty acids, which are excellent for heart health. It’s also high in protein and vitamin D.

Here are some of the proven health benefits of eating salmon:

The fish has a mild flavor and can be cooked by grilling, pan-frying, broiling, and smoking.

Salmon is known for their bright red coloration and oily texture when cooked. They have an oily layer under their skin that helps protect them from predators in their natural environment.

This layer becomes transparent when cooked by frying or grilling it over high heat — this is why raw salmon has a dull appearance compared to cooked salmon.

What is the history of sushi and salmon? 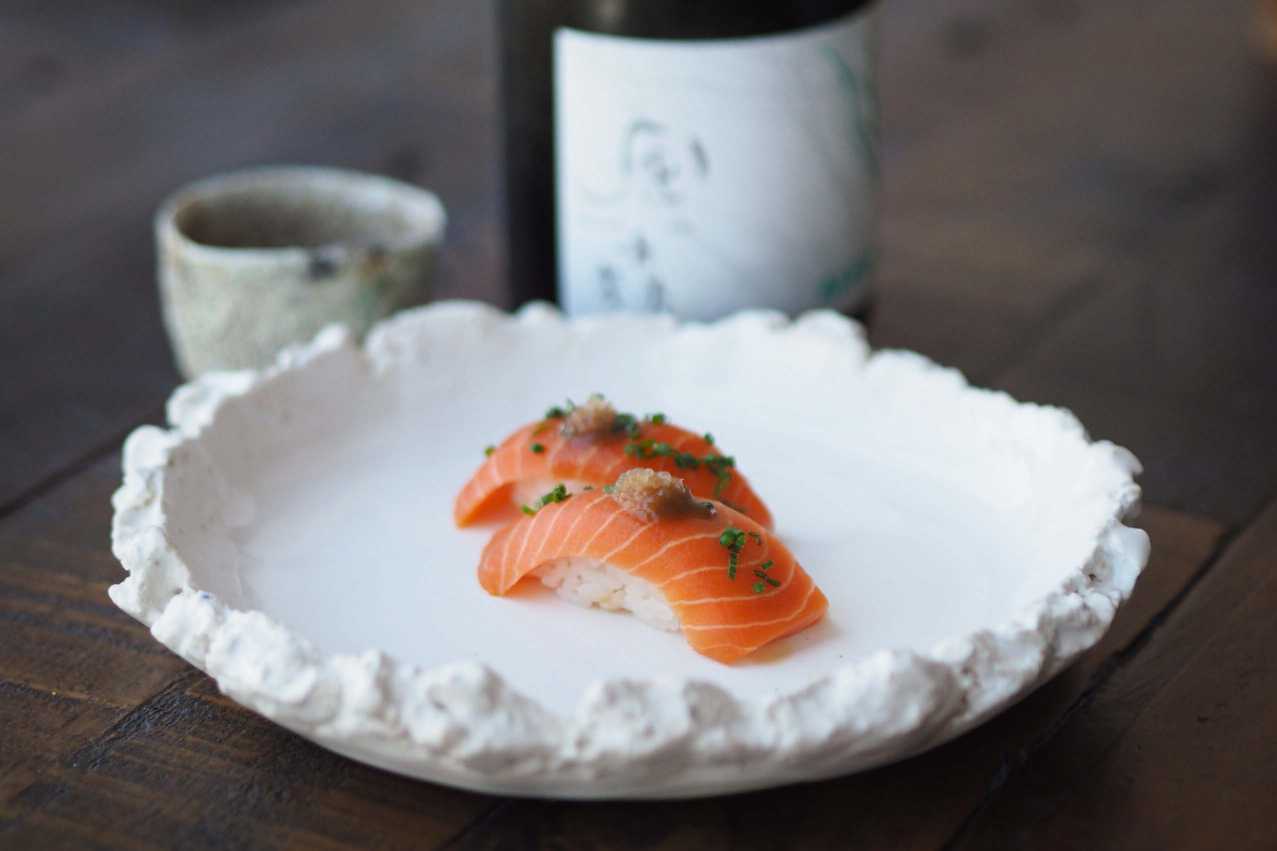 Salmon has been a staple food in Japan for centuries and has been used for many different dishes throughout history. In the 1990s, salmon became a popular ingredient through the Japanese cooking show entitled “Iron Chef.”

Salmon sushi is simply salmon, and rice rolled together in nori or dried seaweed. It is one of the most popular types of sushi in Japan, but like salmon itself, it is a popular dish worldwide.

Some even considered salmon an overrated choice of fish meat for sushi!

Salmon sashimi is also common, but there is no rice or nori involved with sashimi, just raw fish slices on their own.

What kind of salmon is used for sushi?

Today, there are over 20 different species of salmon that can be found around the world. But relax; we’re not going to dive deep into that! This article will discuss the three types of salmon used for sushi.

So, which of these species are used for sushi? The salmon used for sushi are Alaskan Salmon: King Salmon, Sockeye Salmon, and Chum Salmon. 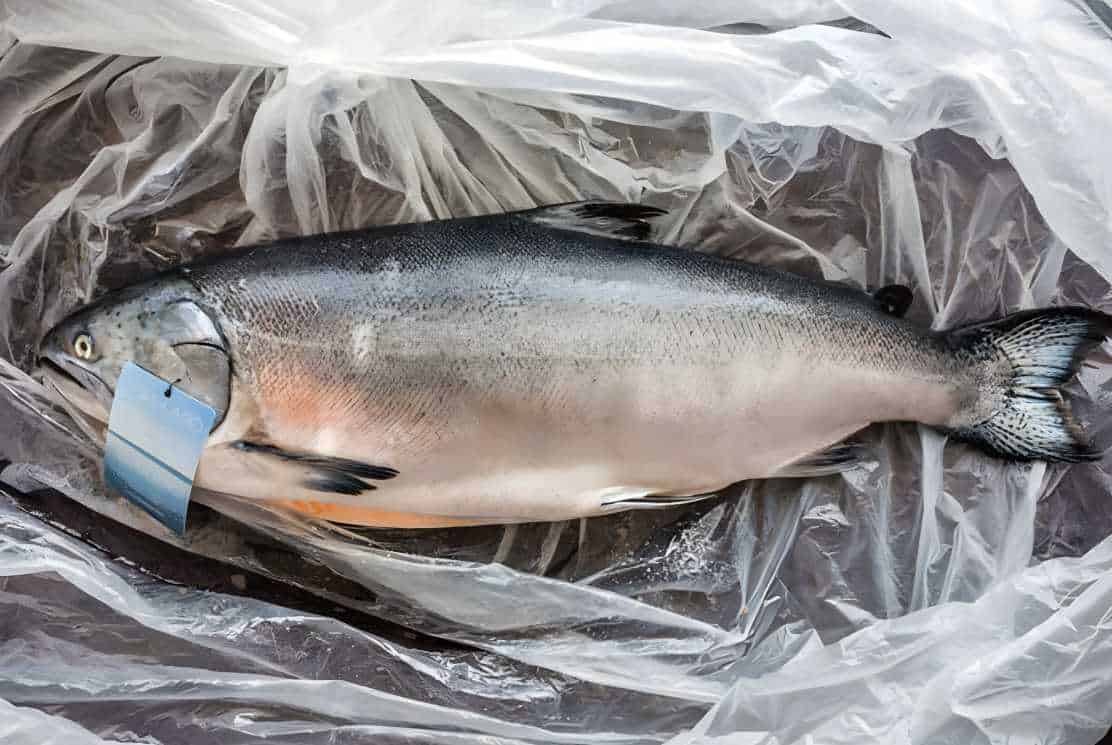 King salmon have dark green-black skin with bright red flesh. They can be found in the northern Pacific Ocean and range from Alaska to Baja California. King salmon are typically caught between 7-20 pounds but can grow up to 100 pounds or more!

King Salmon tases fresh and fishy, with a slight flavor of sweetness. This type of salmon has a fatty consistency with a thick meaty texture. 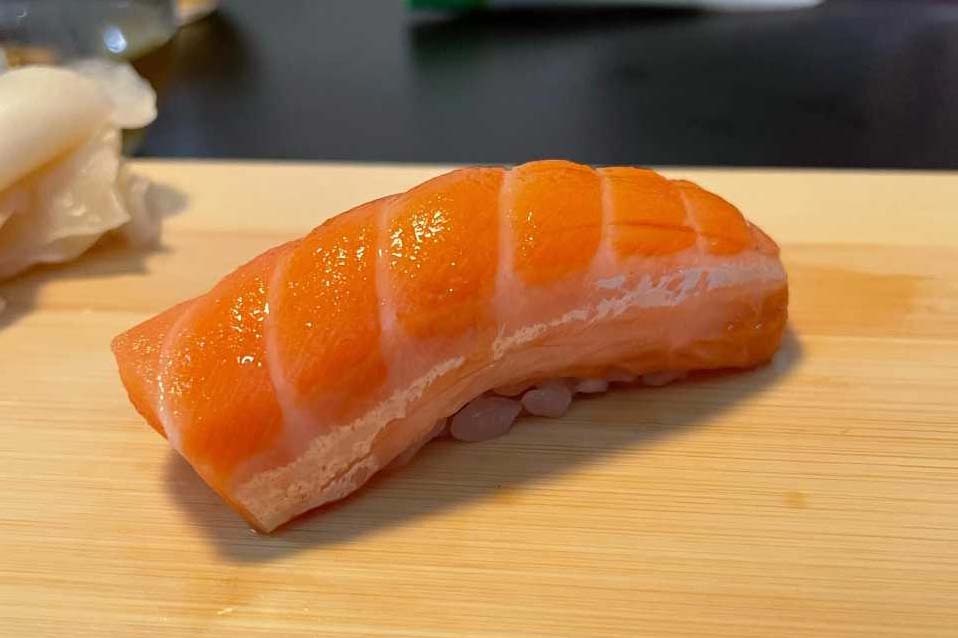 King salmon sushi has a unique taste that can be compared to other types of fish, but it also contains a distinct flavor that sets it apart from different types of sushi.

King salmon sushi is usually served with soy sauce and spicy mayonnaise. The king salmon found in the United States is generally Alaska king salmon, which has a mild flavor than other types of king salmon.

Sockeye salmon spawn in freshwater but live at sea, returning to their natal streams after two to five years at sea (depending on the population). They look similar to silver salmon but have red spots instead of silvery markings.

Fun fact: Sockeye Salmon come back every year to spawn at the exact location where they were born to have offspring at their original birthplace! 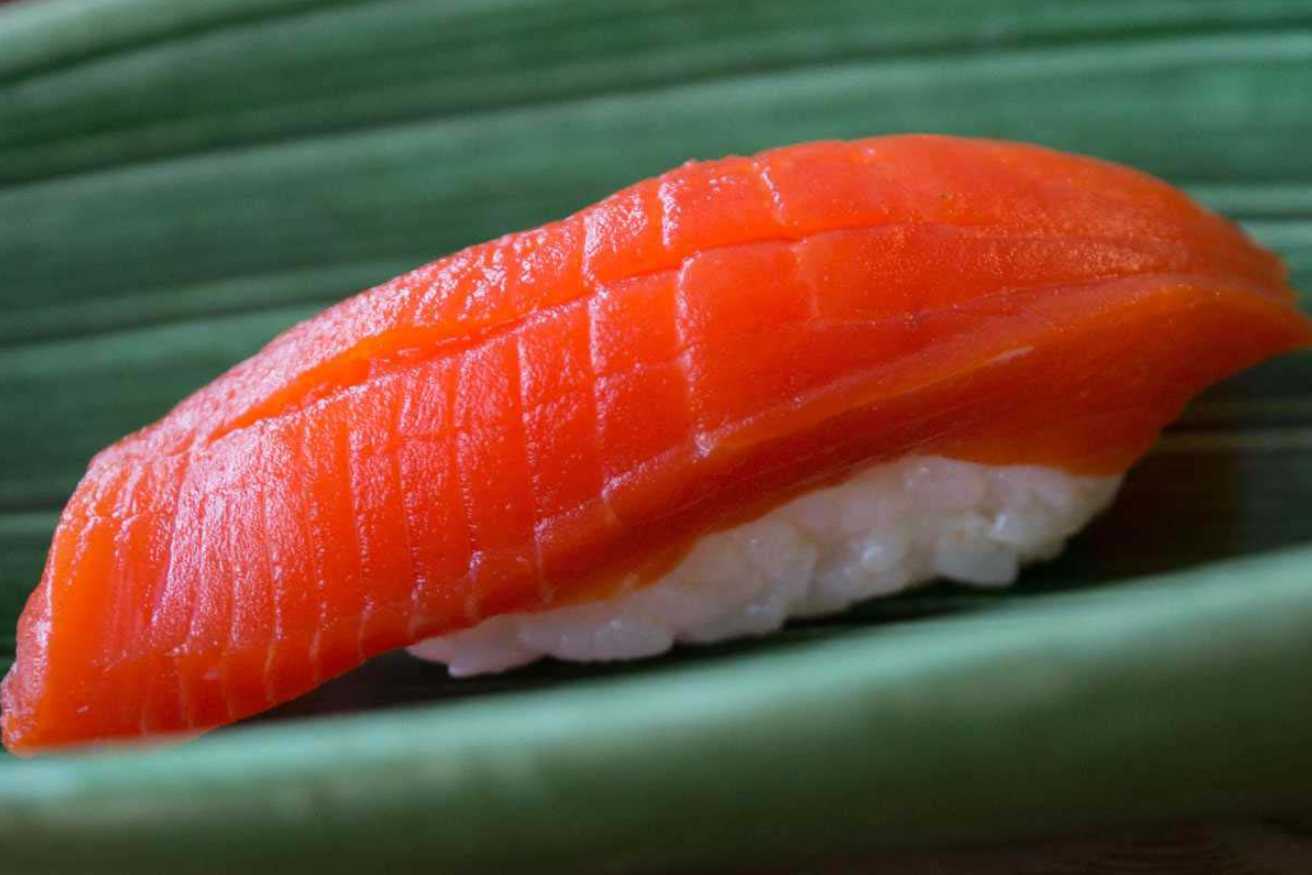 Sockeye salmon sushi is a popular dish in Japanese cuisine, made with raw fish that has been cut into thin slices and placed on top of rice or seaweed sheets. It can be served as an appetizer or part of the main meal.

Sockeye salmon sushi has been gaining popularity in Western countries in recent years due to its high protein and low-fat content compared to other types of seafood such as tuna or shrimp. 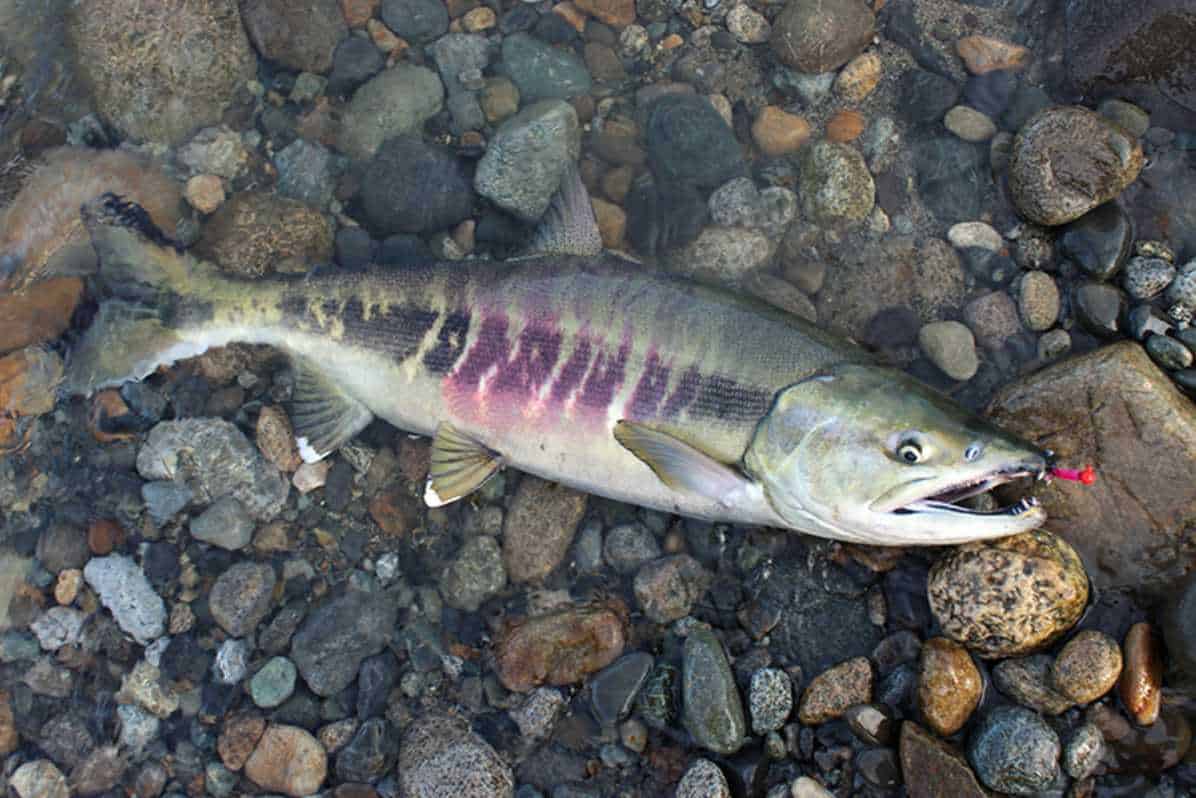 Chum Salmon can be harvested at sea or outside river mouths. Chum salmon is often found mingling with Pink Salmon.

The appearance of Chum Salmon is bright and fresh, and they are perfect to take home to eat! Plus, they are a delicious type of salmon. 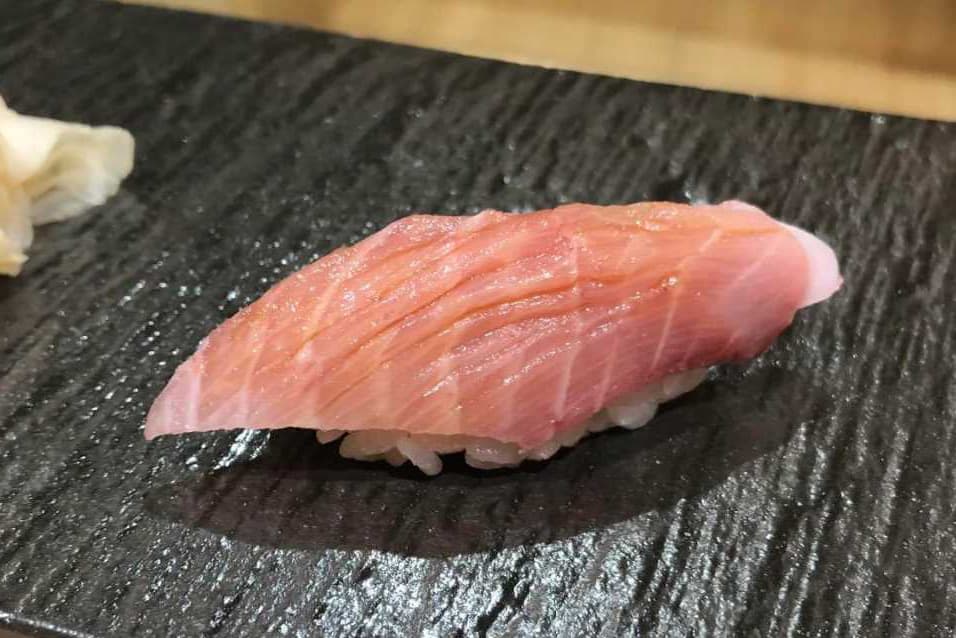 Chum is a popular sushi ingredient because it has a rich, meaty texture and doesn’t have any noticeable bones.

This type of salmon is typically served as nigiri or sashimi, but it can also be used in rolls or cooked dishes like teriyaki salmon.

The taste of chum salmon sushi can be described as rich and oily with a mild flavor. It has a rare red coloration that makes it stand out from other types of sushi ingredients.

What is the best kind of salmon for sushi?

According to experts, the best kind of salmon for sushi is any of the species of the Alaskan Salmon. Those are the three types of salmon we listed above.

Hence, as long as you’re getting sushi-grade King Salmon, Chum Salmon, or Sockeye salmon, your salmon sushi will be the most delicious ever!

Now that you know the kind of salmon used for sushi, why not try these hacks to level up your sushi game?

TikTok has been raving about this crazy, new trend: The Viral Salmon Sushi Rice Bowl!

This trend has been circulating online, and most users are trying it out. But what’s so special about this salmon sushi hack? What kind of salmon is used for sushi bowls like this one?

For this salmon sushi trend, you need to prepare sushi rice and your leftover salmon. You can choose any type of salmon among the three listed above: King Salmon, Chum Salmon, or Sockeye Salmon.

This Tiktok craze requires you to mash the salmon to get the best, delicious results.

2. The Perfect Way of Curing Any Kind of Salmon For Sushi

Before making salmon sushi, it is crucial to cure the fish. It is a necessary task for sashimi to improve the salmon’s taste and texture.

Here are salmon hacks and tips you can try to cure King Salmon, Sockeye Salmon, or Chum Salmon:

The kind of salmon used for sushi is any of the Alaskan Salmon species: King Salmon, Chum Salmon, and Sockeye Salmon. These types of salmon make sushi yummier, leaving you craving more with every bite.

And the next time someone asks you, “what kind of salmon is used for sushi,” you’ll have an answer! You can even teach them viral salmon sushi hacks they can try at home.