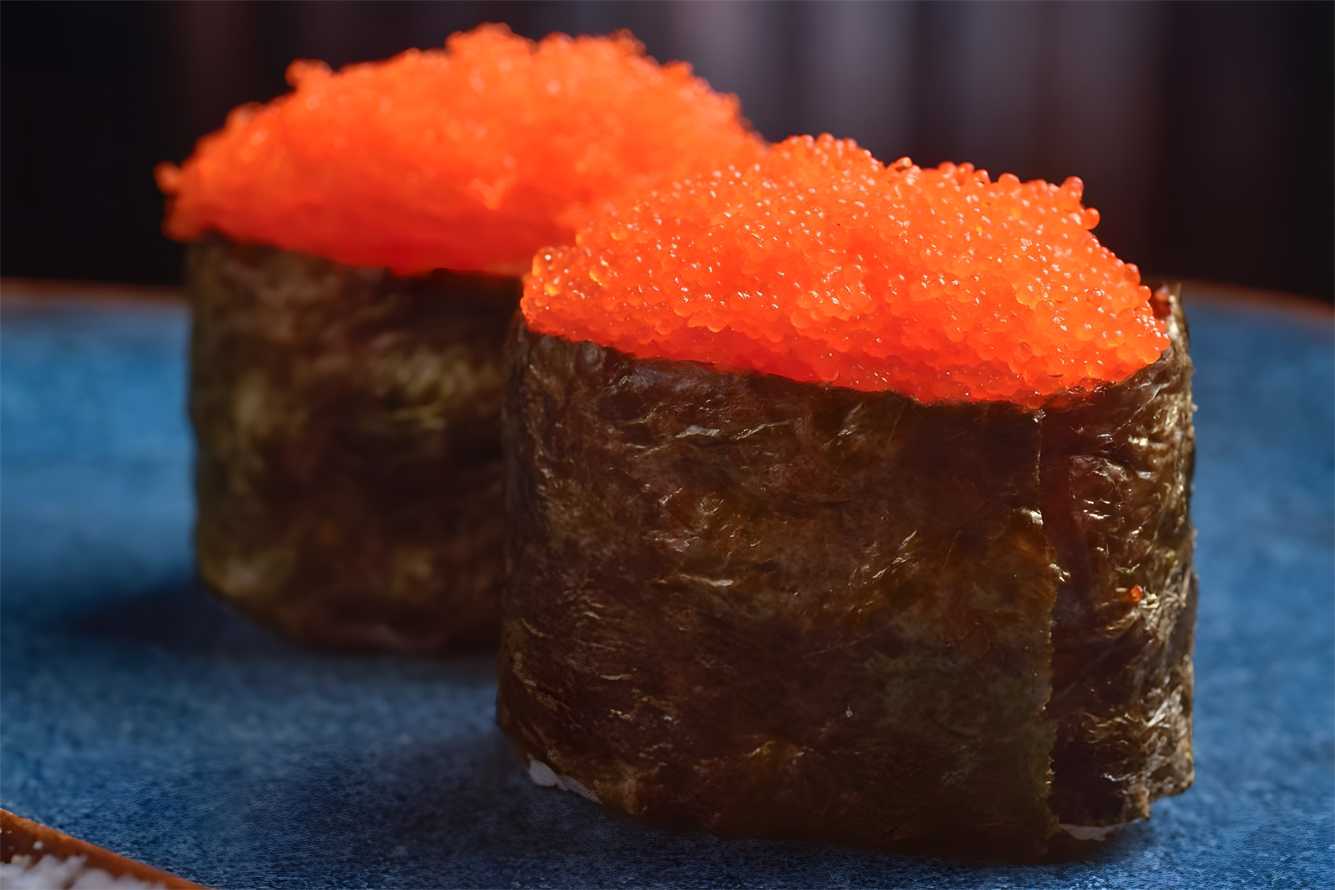 Today, we will be shining the light on one of those ingredients – masago! Yes, it will be all about masago today! What is masago in sushi? Let’s answer that now! Masago is a type of fish roe that came from a member of the smelt family – the capelin fish. This fish is in warm waters like the North Atlantic and North Pacific.

It is small and looks a lot like sardines. While you can eat both of them, many look for the capelin for other things. Like masago, for one!

That’s a quick look at the fish. Now, let’s proceed with the fish egg.

Nature intended for masago to have a pale yellow color, but you might see yours with an orange hue. These eggs are commonly dyed bright colors.

Other than orange, you might also see them dyed red or green. Sometimes, they are also painted black! More than for taste, this process seems to be for visuals.

As you can see, these fish eggs are small. This feature does not only affect their appearance but their texture as well.

If you have ever had other types of roes, you might have noticed that they have some crunch or pop when you eat them. Because of its size, the masago doesn’t offer that kind of pop. It does have some crunch, but only a bit.

When it comes to taste, masago offers that briny taste known to seafood. On the other hand, it also has some sweetness. Sometimes, some would also say it also has a citrusy flavor. As you might have noticed, we said that masago is only a type of fish roe. Yes, there are others!

You might be familiar with the others. On the other hand, you might have been confusing these fish roes. So, let us talk about two of the most popular ones before continuing.

Masago VS Tobiko: What is Tobiko?

First up, let’s talk about tobiko. This fish egg comes from the flying fish, but it is the same with the masago in many ways.

They have similar tastes. You could say that tobiko is only a little more flavorful, but that could also be because of their size difference. A tobiko is bigger than a masago, after all.

They also have the same color. Whereas the masago is dyed, though, the tobiko is not. It has a natural orange tint. Still, it is not unusual to see a tobiko dyed green or other colors.

To add, they also both have some crunch. The tobiko has a more prominent pop between the two, though.

Finally, let’s talk about the price point. The tobiko is more expensive than the masago. That is why you might see more sushi made with masago. Sometimes, some even substitute masago for tobiko.

Masago VS Ikura: What is Ikura?

Over here, we have ikura. You might better know it as salmon caviar, though.

Ikura is not all that different from the masago and tobiko. We should not forget to mention its crunch, though. Eating ikura is really satisfying as there is really that burst when it pops in your mouth!

When it comes to the price point, it is no question that ikura is a lot more expensive than the other two.

Sushi Recipes that Use Masago 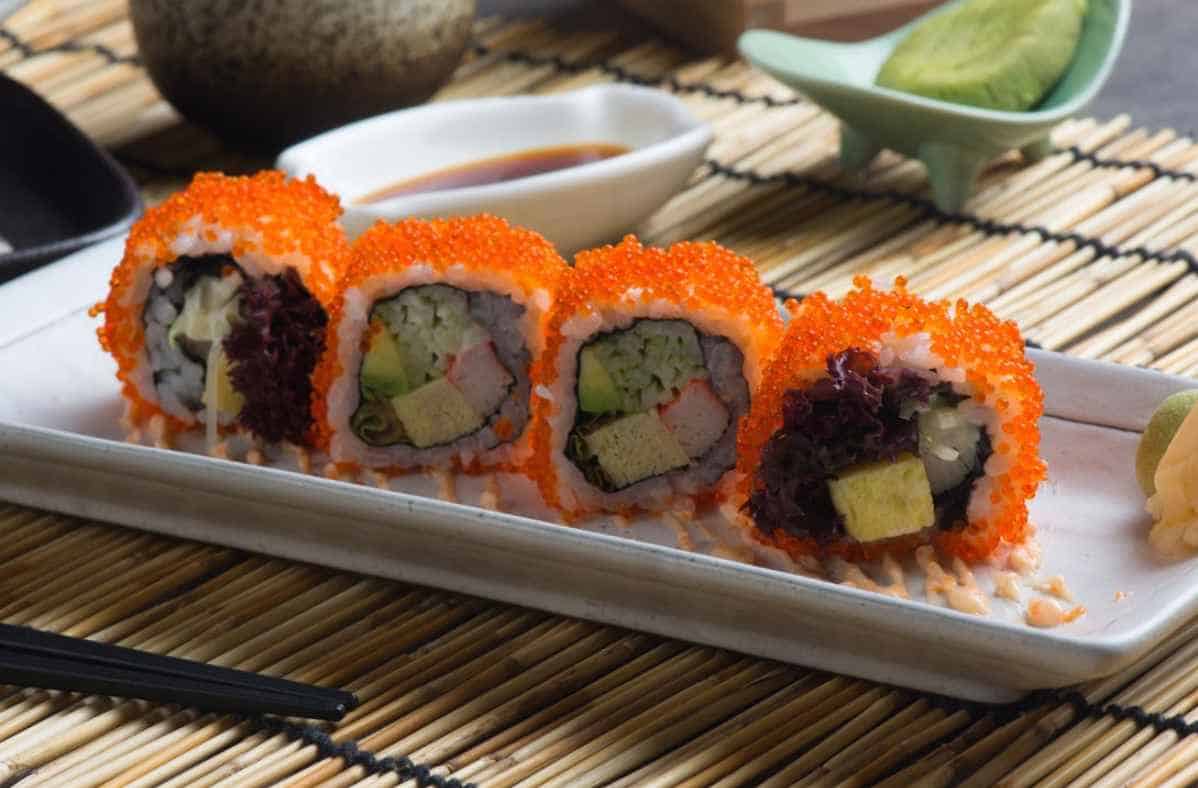 We now know what masago is. To add, we also compared it with other fish eggs. Before we proceed, allow us to show you a few sushi recipes that use this ingredient.

First on the list is none other than the California maki. When talking about masago, this sushi would probably come to mind as often there is a coating or topping of these fish eggs on it.

There are many ways to make California maki. Masago doesn’t always have to be part of this sushi. Still, do you not agree that that beautiful orange coat makes this sushi more eye-catching?

Next up, we have this Boston roll recipe. This sushi is similar to the California maki. The main difference is that this one uses shrimp instead of imitation crab. Whatever you choose between the two, we think you will have a happy tummy at the end!

If you are looking for something spicy, you might want to try this volcano roll recipe instead!

Can I Use Masago For Other Things? Masago does go well with sushi. It is not the only thing you can sprinkle with masago, though. There are tons of other things that employ these delicious tiny spheres.

For example, you can partner masago with sashimi, cheese, and even fruits. Adding it to different dipping sauces is also an option.

On the other hand, you can even use it in different dishes like pasta. If you have ever wanted to know what Japanese spaghetti tastes like, you might want to check and recreate this recipe:

It doesn’t end there. The use of masago does not only end with Japanese or even Asian cuisine. You can even use it in Hawaiian poke bowls! As you can see, you can use it with almost anything you can imagine!

Is Masago Good for Me? After all that we’ve discussed, you might now agree that masago is both flexible and delicious. The question now is, is it good for us?

Well, masago has many good things like omega 3 fatty acids. It has tons of vitamins and minerals too. On the other hand, it is low in calories and mercury.

Masago might first be known for its taste, but it also deserves some praise for its nutritional content. As you can see, yes, masago could be good for you!

In moderation, though. Any good thing can easily be a bad thing if abused. Despite all the good that masago holds, it also has some unhealthy stuff.

For one, it is high in sodium. While some masago will not hurt you despite the high sodium, consuming too much could be bad for your health.

How Do I Store Masago?

Eating masago that has gone bad is not healthy too, of course! So, before we continue, let’s briefly talk about how you should store this delicacy.

Is Masago for Everyone? We now know that masago is flexible, delicious, and could even be good for you. Unfortunately, it is not for everyone.

Many do not like dealing with and eating raw food, and masago is that kind of food. If you don’t want to eat uncooked food, you might want to stay away from masago.

Are you staying away from raw food because of the health risks? You might want to know that those risks are low with masago.

If you are tasting masago for the first time, it might be ideal to try a small amount first. If you have a seafood allergy, you might also be allergic to masago.

On the other hand, not having that allergy is not enough to feel safe without a test. It is possible not to be allergic to seafood but allergic to masago.

Where Can I Buy Masago?

Finally, you might now be excited to get some masago. You might be wondering where you can get it. Well, you need not worry. It is available in many places!

For one, you can check the supermarket near you. If they have international goods, it is likely that they also have some masago.

As you might have noticed, sushi is slowly but surely becoming more and more popular in the states. With that, you can expect to find sushi ingredients (i.e., masago) in this area.

On the other hand, you can try to look for masago in Asian grocery stores and the like.

Finally, if you really can’t seem to find masago in these places, there is always the option to order online. It might be a little more expensive, but it’s a great last option!

What is masago in sushi? Well, today, we talked all about masago!

First, we discussed what it is. Here, we learned that it is fish eggs from the capelin. After that, we also talked about its difference from other roes like tobiko and ikura. Then, we went on and learned some sushi recipes that use masago.

Of course, we also talked about if it is good for us, where we learned that it could be when you eat it in moderation. After that, we discussed how it is not for everyone.

Finally, we let you in on where you can find it! We hope we got to help you with this sushi concern! See you next time!