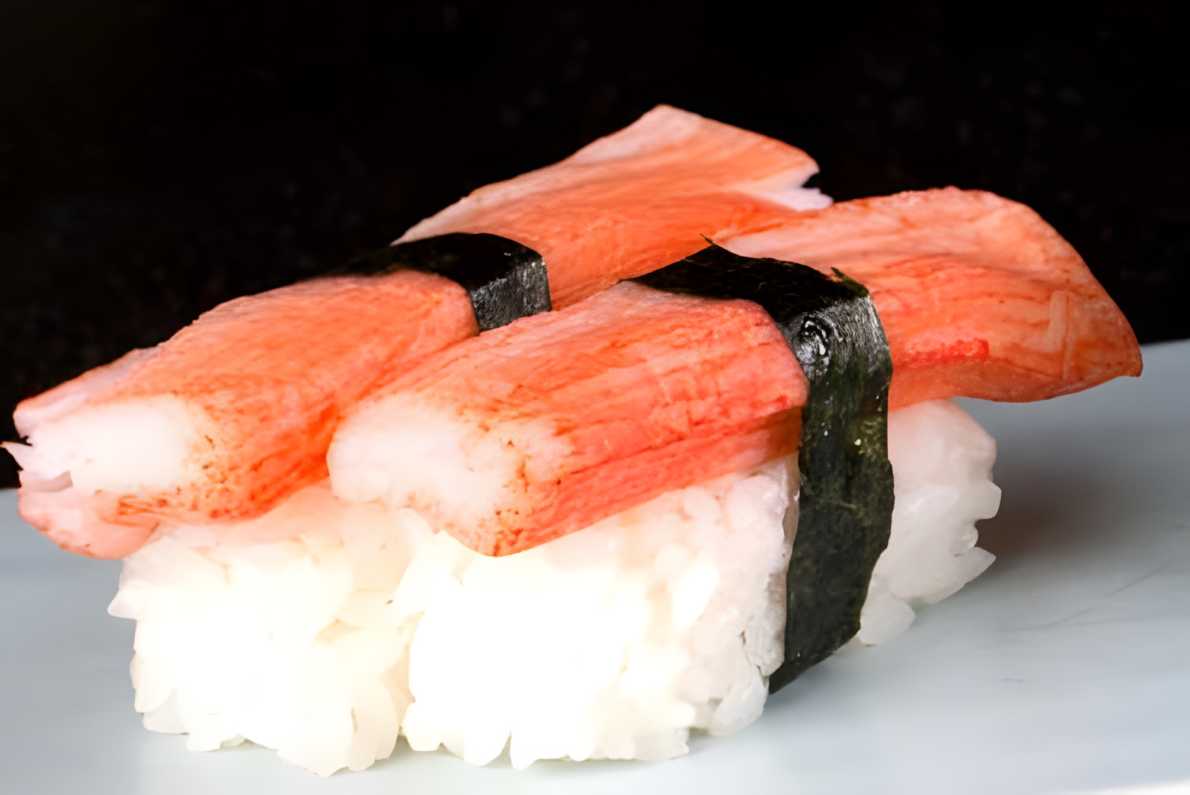 Food is never a dull subject and one of the most exciting parts of being someone who enjoys sushi, and there are many things to look forward to.

This includes both the major and the minor ingredients. Whether the ingredients are fresh or preserved, everything contributes to flavor. So, as a sushi enjoyer, you might ask, what is Kanikama in sushi? One of the main ingredients in creating Kanikama is Alaskan pollock. Alaskan pollock is primarily sourced throughout the North Pacific. Specifically, the largest concentrations of Alaskan Pollock are in the Eastern Bering Sea.

Along with Alaskan pollock, kanikama typically also has more minor bits of other white fish, binding material like egg whites and cornstarch.

For the flavor, manufacturers mimic the crab taste by putting in crab flavoring, whether it’s store-bought or their mix of crab flavoring. The flavoring can be processed and obtained from real crab meat, extract, or artificial crab flavoring.

This way, the sticks are infused with the crab flavor, making it taste like real crab meat, a more expensive ingredient. With all these processes, kanikama, a cheaper substitute for crab meat, is created.

History and Origin of Kanikama As the use of kanikama increases worldwide, not only in sushi but also in other dishes, you must be curious as to where this brilliant idea came from. Creating artificial crab meat substitutes or crab sticks was from Katsuichi Osaki.

Katsuichi is the son of Nobuichi Osaki, the founder of a manufacturing company focusing mainly on seafood. And so, Katsuichi was pretty much exposed to the nature of their business.

The idea was born when Katsuichi noticed leftover fish meat from a different product they were manufacturing. This fish meat was soaked in crab juice, and as he observed further, he discovered that the fish meat tasted like real crab meat.

The idea of including food color in the product to mimic the crab’s hue was later incorporated as the company continued its fine-tuning process for the emerging product, kanikama.

Back then, it was a considerable risk for the company to manufacture products like kanikama as it did not fit the traditional framework of the field or industry.

And so, kanikama has joined their list of manufactured products considered ground-breaking. This is also because of its fast and vast expansion and the rise in its demand. Imitation crab is different from real crab meat despite having so many similarities, including flavor and color. Kanikama has made its way worldwide.

Along with the spread of kanikama is its involvement in many dishes sold in many stores and restaurants. Using kanikama instead of crab meat in local dishes is more practical as kanikama is relatively cheaper than real crab meat.

If a dish name on the menu uses the term “krab” on it, this usually means that the “crab meat” used in the dish is not real crab meat.

This goes for most restaurants though some change the letter ‘c’ to ‘k’ as wordplay. So, what does kanikama have as a contribution in terms of nutritional value?

Compared to kanikama, real crab meat contains a higher nutritional value, of course. Real crab meat is fresh, so the natural thing’s nutrient content is preserved as much as possible.

This means that real crab meat would be preferable and ideal for people who are watching their carb intake or are on a keto diet.

Although kanikama’s ingredients like fish meat are filled with nutrients, the said nutrients are diminished until it’s gone and void because of the processes it undergoes.

The methods that instigate change and loss of nutrients include washing, exposure to heat, and other procedures. Real crab meat is also rich in omega 3 fatty acids, which is not the case for crab sticks.

Although some manufacturers infuse kanikama with added omega-3 fatty acids, this is not the case for all of them.

Kanikama Ingredients and Their Contributions Here are some of the significant ingredients for kanikama and their purpose and contributions to the product. The kanikama you see in stores are already cooked and consumable. This also means that they are already cooked. These crab sticks can be served and eaten differently, whether mixed in specialty or simple dishes like sushi.

On the other hand, they can also be eaten as they are. You can have these imitation crabs at room temperature or eat them chilled accompanied by different sauces, depending on your preference.

Kanikama is famously seen in California sushi rolls. This sushi type is famous all over the world. Imitation crab sticks are meant to be eaten as how the consumer intends to eat them.

Some people prefer eating them without further cooking because they deem it is in their best state. On the other hand, some would prefer cooking it again as an accompaniment to other dishes.

However, it’s also crucial to take note whenever you decide to cook them again, do it during the last parts of cooking so you won’t overcook them.

Since these sticks are cooked and sold ready to eat, they do not need to be cooked again. Understandably, some might be worried about the safety and cleanliness of kanikama as they might have been used to reheating food.

Worry not, as manufacturers have ensured that kanikama is already cured and ready to eat. Therefore, there is no need to reheat these sticks as they are safe.

Instead, warm them up and do not overdo it. Some would say that overcooking them would destroy a chunk of taste percentage.

These imitation crab sticks can be placed inside the fridge, and it will not affect the sticks’ taste and even their texture.

As discussed, kanikama is made and designed to be unchanging despite the exposure to cold temperatures or during freezing. Some kanikama is packed in sealed bags, and some come in their creative packaging.

Despite the differences in packaging, you can safely place them inside your freezer, and it would be just okay when you take them out for consumption.

As kanikama is famously used worldwide, asking questions such as “What is kanikama in sushi?” is expected.

Getting to know the food you eat is never a bother and is very useful, especially for people with a strict diet, sensitive stomachs, or perhaps allergies. More often than not, it pays to know.