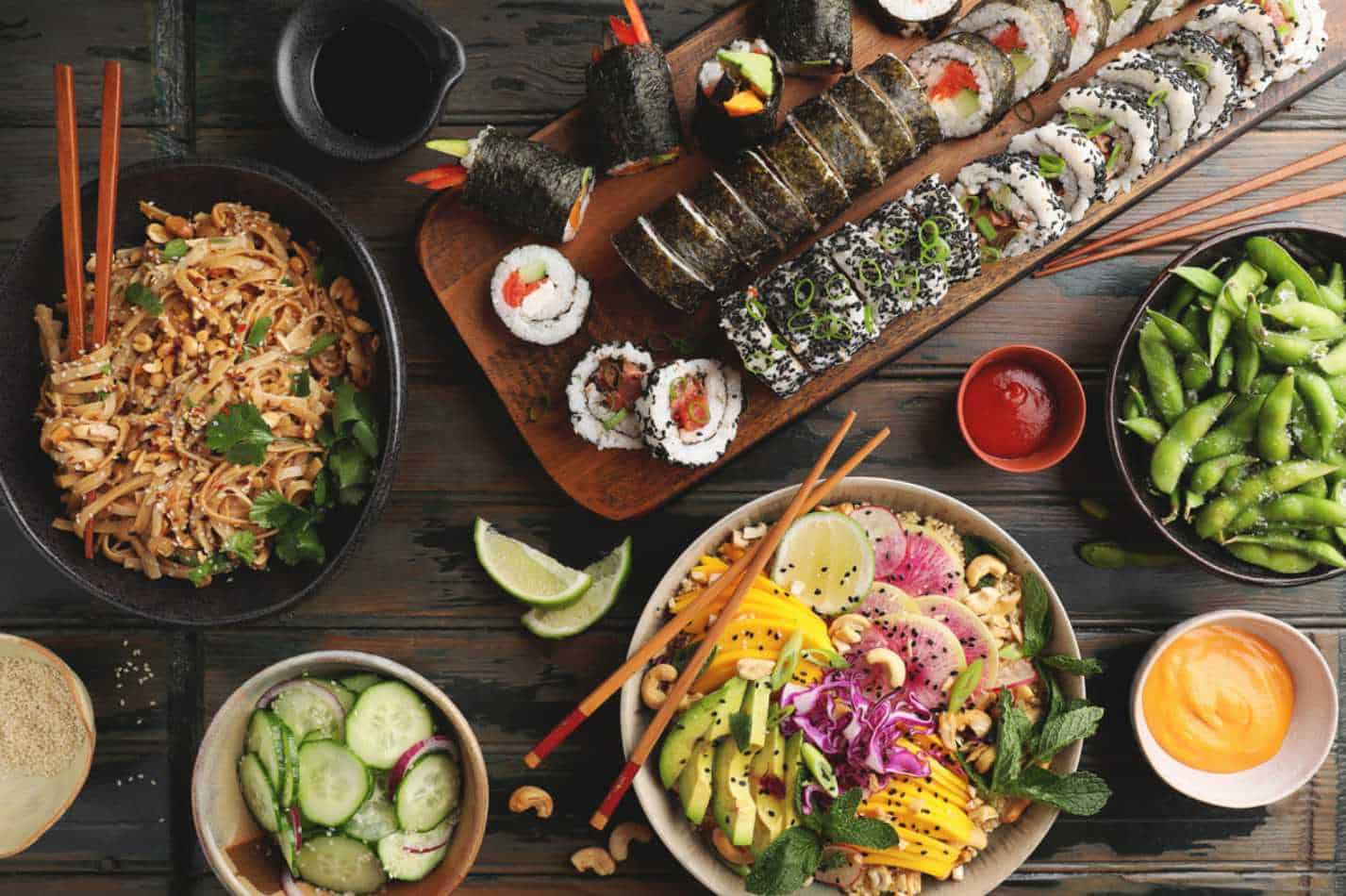 Sushi has been popular worldwide for its delicious and savory taste. With that said, having only sushi can sometimes be not enough. This article will answer the question: What goes good with sushi? Pickled ginger or gari is a staple accompaniment to sushi. It has a distinct light pink color from the pigment in baby ginger, the primary ingredient of gari.

It’s a well-known palate cleanser that you can eat between eating different types of sushi. It makes the eating experience a lot better by letting you taste the individual sushi without combining its unique flavors.

It also makes the fishiness of sushi much milder, an essential feature if you are particularly not fond of raw fish.

Authentic gari comes from young ginger. However, regular ginger is often used in restaurants due to its scarcity, especially in the west, so most restaurants use standard ginger. Miso soup is a great partner for sushi due to its savory taste. The broth is often made with miso paste and dashi stock and topped with spring onions and tofu. It’s a flavorful broth without overpowering the taste of the sushi.

Like pickled ginger or gari, it can also be used as a palate cleanser in between sushi. It’s also straightforward to prepare and can only take around ten to fifteen minutes.

So, if you decide to make your own to try, it can be excellent even without prior experience. Gyoza is a half-moon shape dumpling that is commonly steamed or fried. It has many assortments of fillings such as pork, seafood, vegetable, and chicken.

The filling is a mixture of minced and grounded ingredients such as onion, garlic, cabbage, carrots, shiitake mushrooms, and minced ginger.

Depending on your sushi, you can choose the best gyoza to combine with your sushi. Vegetable gyoza is excellent for seafood sushi such as shrimp maki, nigiri, or uni nigiri. Meat-filled gyoza is ideal for vegetable sushi rolls. Edamame or young soybean pods can be an excellent combo for sushi. It has a crunchy and chewy texture that mixes well with soft and juicy sushi. The earthy soy taste is a perfect complement to the seafood flavor of the sushi.

Edamame is very easy to prepare. You need to blanch it with salt for four to five minutes and serve. You can make it a side dish to many Japanese foods, not just sushi. Karaage is a popular deep-fried dish in Japan. It can range from multiple types of meat such as pork, beef, and seafood. However, the most prevalent variation is the chicken karaage.

Karaage will not be out of place if partnered with sushi, as it’s a well-known side dish for rice in Japanese cuisine.

Meat and seafood karaage has a crunchy texture and a flavorful inside as it’s commonly marinated beforehand. Light and crunchy tempura is perfect for sushi. Since most sushi is soft and savory, the crunch of the tempura can introduce new and unique flavors and textures.

Although tempura is often made with shrimp, you can also use the tempura batter with various vegetables such as cucumber, carrots, and cabbage. Other seafood such as fish and crab can also be used. Kani salad or imitation crab salad is a refreshing and light dish, a perfect contrast with a plate of hearty sushi rolls. To make this dish, you need five ingredients: Kani, julienne cut cucumber and carrots, cabbage or lettuce, and spicy mayo.

Although it uses Japanese ingredients, Kani salad is not from Japan. It’s a dish that originated in America, so finding it in traditional Japanese restaurants is challenging. Tamagoyaki, or rolled eggs, is another typical Japanese dish. It’s primarily used as a side dish for meals or ramen. However, it can also be a great side dish or topping for sushi.

The mild egg flavor and creamy texture are a great mixture of sushi’s tangy and savory taste. It’s often rolled with a few drops of mirin and sugar to give it a hint of sweetness. Kushiyaki is a word to describe any skewered grilled food. It can contain many ingredients such as vegetables, seafood, and meat, so whatever type of sushi you have, you can ensure that there is kushiyaki that will perfectly mix with sushi.

Kushiyaki is well-known for its saucy and juicy taste due to the teriyaki sauce. The smokey and sweet flavor of kushiyaki is an excellent contrast to the plain and clean taste of the sushi.

It’s also widely available in traditional Japanese restaurants, so finding it will not be hard. Spicy mayo is a sauce that often accompanies sushi. It’s a modern addition and not as old as the original soy sauce. Spicy mayo is more popular with American variations of sushi such as California maki, Boston sushi roll, and Philly rolls.

It’s not as popular as traditional nigiri sushi as they are often raw and eaten with soy sauce.

To make spicy mayo, add sriracha and kewpie mayo together and mix. Some varieties of sushi, such as Boston rolls, also add fish roe such as masago or tobiko to give the condiment a unique taste. It’s a great side if you want a mild taste and slippery texture to accompany your sushi. Adding chili flakes is also an option to give it a little bit of kick. Eggplants are a very common side dish in Japanese cuisine. Admittedly, the vegetable does not have a lot of flavor by itself. However, mixed with many ingredients, you can use eggplants as an excellent combo for sushi.

You can make an eggplant dengaku. It’s a traditional Japanese homemade dish where the eggplant is glazed with miso sauce and propped into the oven or pan-fried on the stove until the sauce is caramelized.

Teriyaki eggplant is also another dish you can try. It’s made with eggplant slices marinated in teriyaki sauce and then seared against olive oil. It’s smokey and sweet, perfect for eating nigiri or uni sushi. Teriyaki tofu is a side dish famous in Japan that often accompanies rice in a meal. The crunchy and sweet exterior of the tofu and the soft interior is sought after in many Asian restaurants.

The dish is made by cutting the tofu into cubes and coating it with teriyaki sauce. Then, the tofu cubes are pan-fried until crispy. Wasabi is a type of horseradish dip that is often served with sushi. It’s well-known for its spicy taste and light green color. It’s a great accompaniment to give your sushi a strong kick. For a more hearty side dish, you can try out beef udon. It’s a traditional Japanese noodle soup made with beef broth and topped with beef slices and onion chives.

It’s excellent if you want to mix the cold feel of sushi with the warm broth of the udon. Dango is a sticky ball-shaped dessert from Japan. It’s made with rice flour, creating a starchy and gelatinous flavor.

Unlike mochi, dango has a milder sweet taste without any fillings. It’s a great combo with sushi if you want a sweet flavor without overpowering the main dish. Matcha or green tea ice cream is a trendy dessert nowadays. Its sweet and earthy taste can go well, especially with hearty rice dishes such as sushi. Matcha ice cream is an excellent dessert after you eat your sushi.

Since it has become more popular, matcha ice cream has been widely available worldwide. You can even make your own by combining green tea with condensed milk and heavy cream. Green tea or matcha is an ancient Japanese traditional drink. It’s a popular drink akin to coffee in the West. The earthy flavor of the tea is a perfect combination of the strong seafood flavor in sushi.

Japanese green tea can take a lot of forms nowadays. They can be made to cold frappes, milk tea, and many more, so you can choose from many varieties if the traditional hot green tea is not for you.

You don’t need to look far for a sip of matcha. They are often available at sushi bars as one of the leading drinks, along with sake or Japanese rice wine.

Sushi is already great on its own, but it can be better with side dishes and drinks. It can range from typical Japanese salads to non-traditional varieties of condiments.

We hope you can try this excellent food and know what goes good with sushi for you.