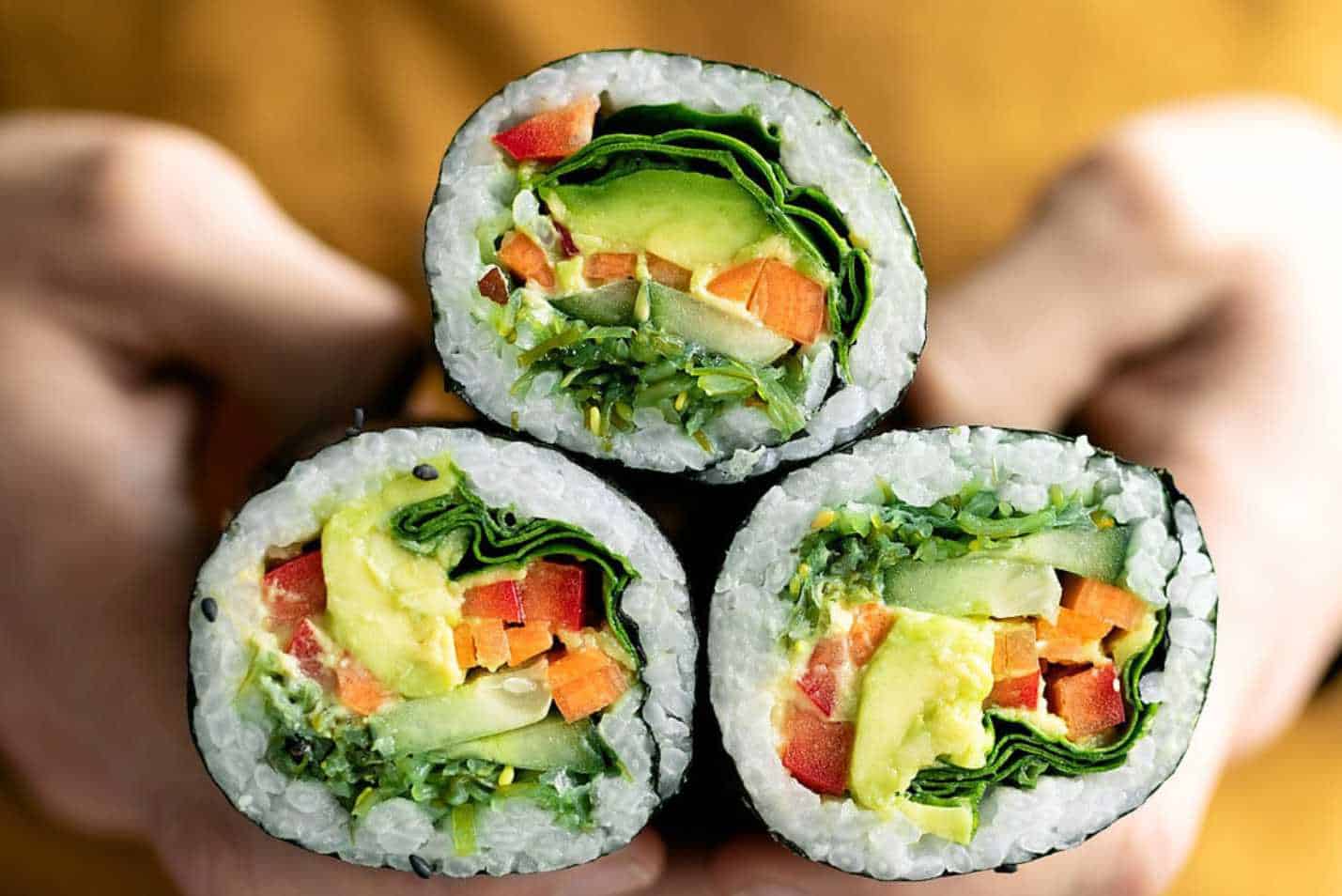 As a vegan, since eating tuna sushi is a no-no for you, you can try sushi recipes where the tuna is replaced with other nutritious and vegan-friendly ingredients.

Even if you are non-vegan and want to switch things up, you can also check out the vegan sushi recipes. You are surely in for a ride if you try out these recipes!

For this sushi dish, use marinated tomatoes instead of tuna. First, boil the tomato for a while in hot water before skinning it with a paring knife. After, vertically cut the tomato into four quarters and seed it.

Add kombu, tamari, ginger, and scallions into boiling water and let it cook, stirring for 5 minutes. Remove from heat and add the tomato to marinate it. Bring the rice to a boil in the water on low heat and let it simmer for 20 minutes.

After that, mix it with vinegar, salt, and sugar, also called sushi vinegar. To make the sushi, mold 1½  tablespoons of rice into an oval shape, top it with one piece of tomato, and wrap the middle with a strip of nori.

To make this dish, use tofu in place of sushi rice. Wrap a block of tofu with a paper towel and place something heavy on it for 15 minutes.

Place the drained tofu, onion, rice vinegar, sesame oil, salt, and garlic powder in a food processor and blend until the tofu is the size of couscous. Slice the carrot and cucumber into matchstick sizes. Spread your nori sheet on a sushi mat.

Spread the tofu mix on ⅓ of the nori sheet. Add the vegetable filling to the tofu, then roll. After, cut up the sushi into half-inch pieces before serving

Here’s your go-to if you want something different. Boil the sushi rice and pour the cooked rice into a bowl of sushi vinegar. Mix well before allowing it to cool.

Cut the Oshinko lengthwise, just as long as one side of the nori. Lay the nori sheet on a sushi mat and spread the cooked sushi rice over it, leaving about an inch of space.

Place the Oshinko on the opposite side of the space on the rice and roll it up. Wet the space to help seal it up properly. Cut it up into smaller pieces.

To cook this dish, leave your sushi rice to boil and as it cooks, make the filling for your sushi. For the sushi fillings, coat the tofu in peanut butter glaze. Slice your cucumber and spring onions thinly.

After, mix your sushi rice with sushi vinegar and spread the nori on the rolling mat. Place your sliced vegetables, coated tofu, and roasted peanuts on the rice before rolling it.

After rolling, cut into smaller pieces, half an inch in size, before serving.

Prepare your sushi rice beforehand, boil it in water, and combine it gently with sushi vinegar after it is cooked. Sprinkle the sesame seeds on the rice. You should have refrigerated the inari before now; take it out of the fridge and drain it.

With a handful of rice, make oblong shapes in 12 places. Open up the Inari age pocket to the bottom. Fold the skin of the pocket outside, then stuff the oblong rice into them.

Unfold the skin and close the pocket by folding both edges. Place the seam side down before continuing with other inari sushi. Serve with any chilled drink of your choice.

You have to replace your tuna with finely chopped watermelon and use vegan mayo for this sushi recipe. Cook the rice properly. Mix a teaspoon of the mayo and Sriracha sauce to make the spicy mayo.

Mix the watermelon tuna chunks, Sriracha sauce,a third of the onions and sesame oil in a bowl. Lay a nori sheet on the bamboo mat and evenly spread a bit of the rice over the nori.

Sprinkle some sesame seeds. Add about a quarter of the watermelon chunks along the closest nori sheet’s edge closest to you. Roll the nori away from you. After being rolled, cut the roll into smaller pieces.

Boil your sushi rice first before mixing it with sushi vinegar. Cook chili paste and garlic cloves in oil on medium heat for a minute. Add eggplant strips and cook until it is tender and browned on each side.

After this, get a nori sheet and place it on the rolling mat. With wet hands, evenly spread a thin layer of cooked rice over the nori.

Arrange some of your eggplants on the nori, followed by half of the scallion stalks along the strip of eggplant. Then roll it up with the aid of the bamboo mat. Once it is all rolled up, cut it into eight pieces.

Kappamaki roll, also known as cucumber roll, is a simple sushi roll(maki) made with Japanese cucumber. It is a 20 minutes dish that newbies can make.

After setting aside the ingredients, cut your cucumbers into thin matchstick slices. Spread your cooked rice on the nori sheet. After that is done, place your sliced cucumber on the rice before rolling it up.

After, cut your sushi into smaller bits and serve.

For the sweet potato tempura, pour some oil on a small cast-iron pot and place on medium heat or in the oven at 350°. Mix the vegan egg and fizzy water, but add the flour before mixing.

Add batches of potato sticks into the batter. Fry it in the hot oil. Lay the nori on the sushi mat, and spread the rice over it. Sprinkle sesame seeds over the rice.

Place two or three pieces of the potato tempura on the side closest to you and some avocados. Roll the sushi away from you and after it’s properly done, cut it up.

This healthy meal is one that both fish lovers and vegans would love. Instead of sushi rice, use Quinoa rice. After you’ve boiled the rice, mix it with sushi vinegar and honey. Spread the mix out on a thin layer and allow it to cool.

Wrap the tofu in a towel and place something heavy to drain. Heat oil in a pan. In a bowl, add salt, carbonated water, vinegar, and mix. Then stir in ice cubes, breadcrumbs, and coconut.

Cut the tofu into long, thin slices and dust with cornstarch before dipping them into the coconut batter. Fry the slices in the oil and set them aside. Place a nori sheet on a rolling mat.

Spread some of the quinoa on it before placing the fried tofu horizontally across the center of the quinoa. Add some vegetables of your choice. Roll up the sushi. Once it is sealed, cut it up for serving.

This recipe is as interesting as the name sounds. Boil the sushi rice and let it cool for 10 minutes. For one minute, cook sauteed garlic cloves in sesame oil.

Add the shiitake mushroom caps and cook each side for five minutes. When the caps are tender and brown, add water, soy sauce, and chili pepper. Raise the heat and let it simmer until most of the liquid has evaporated.

Spread the nori on the sushi mat, and spread the rice over it. Add a line of mushrooms at the edge and roll it up. After rolling it up, cut it into smaller pieces for serving.

This sushi roll has fillings made from as many vegetables as you like. Add the sushi seasoning to your rice as it boils. On the other hand, cut your vegetables and tofu thin.

Then, spread your nori sheet on a rolling sushi mat with the shiny side down. After your rice is cooked and drained, spread it over the nori sheet, leaving about 1.5cm space just at the top.

When this is done, add the tofu and vegetables fillings to the other end of the nori sheet and carefully roll it up. You don’t need to cut them up into smaller pieces.

Boil the rice up and simmer for 20 minutes. After that, mix it in a bowl with sushi vinegar and grated beets or beet juice for a pink color. Place the nori on the sushi mat and spread the pink rice over it.

At the edge closest to you, add your veggie fillings and roll away from you. Cut them into smaller pieces for serving

For this dish, you need marinated watermelon to replace the tuna. Put all marinating ingredients in a ziplock bag, including the watermelon, and leave in the fridge for 6 hours or overnight.

After, bring it out and place your marinated watermelon on a parchment paper-lined baking tray. Bake for 2 hours, using a spatula to flip it.  Boil your sushi rice and mix it with rice vinegar and sugar while still hot.

Then make oval shapes with the rice and let them dry. Get a nori sheet and cut it lengthwise. Use the cut nori sheet to wrap the rice before scooping the watermelon tuna.

For the vegan spicy tuna roll, skin and marinate the tomato. As the tomato marinates, mix the boiled rice with sushi vinegar and set aside. Combine the vegan mayo with Sriracha in a separate bowl to make spicy mayo.

Lay down a nori sheet horizontally with the rough side up evenly and spread out one cup of rice over the nori.

Next, smear a strip of spicy mayo atop the rice before adding a layer of cucumber, avocado, then the ‘tuna.’ Roll the sushi away from you, and when you get to the end, wet the edge to help seal it properly. Then, cut it up into small pieces.

Sushi Burrito, or as many would call it, Sushirrito, is a blend of Mexican and Japanese food. Boil your sushi rice as usual and drain the tofu.

For the burrito, place two nori sheets together by pressing the short wet end of one to the other until you have a long nori length.

Spread the rice on the sheet, smear a mix of Chipotle mayonnaise, fried tofu, and some slices of avocado, kimchi, spinach, carrots, and pickled ginger.

Roll the nori but wet its edge to seal it. For some seconds, hold the seam side down for proper sealing. Your sushirrito is ready to eat!

Onigirazu is a Japanese sandwich made with tofu, carrot, and lettuce fillings. Line a baking tray with aluminum foil and spray with cooking spray. Drain tofu and cut it into 0.0.5-inch slices.

Transfer the tofu to the baking tray and spray with cooking spray. Bake it for 10 minutes, flip it and bake it for 5 minutes.

On the center of the nori, spread the cooked rice in a square shape, then add lettuce, the tofu katsu, carrot, and the teriyaki sauce.  Cover with another thin, square-shaped layer.

Roll each side of the nori to the middle. Flip the onigirazu. And let it rest for 5 minutes before cutting it in half.

Like other sushi recipes, cook your rice and leave it to simmer for 20 minutes; then, mix it with sushi vinegar. After this, refrigerate the rice until you are ready to roll the sushi. Then,  slice your avocado and pepper into thin slices and serve.

If you are a vegan but love sushi, you don’t have to miss out on eating your favorite dish because of fish. You can excite your taste buds with any of the sushi recipes above. Asides the sweetness of the food, your body would also thank you for nourishing it the right way.