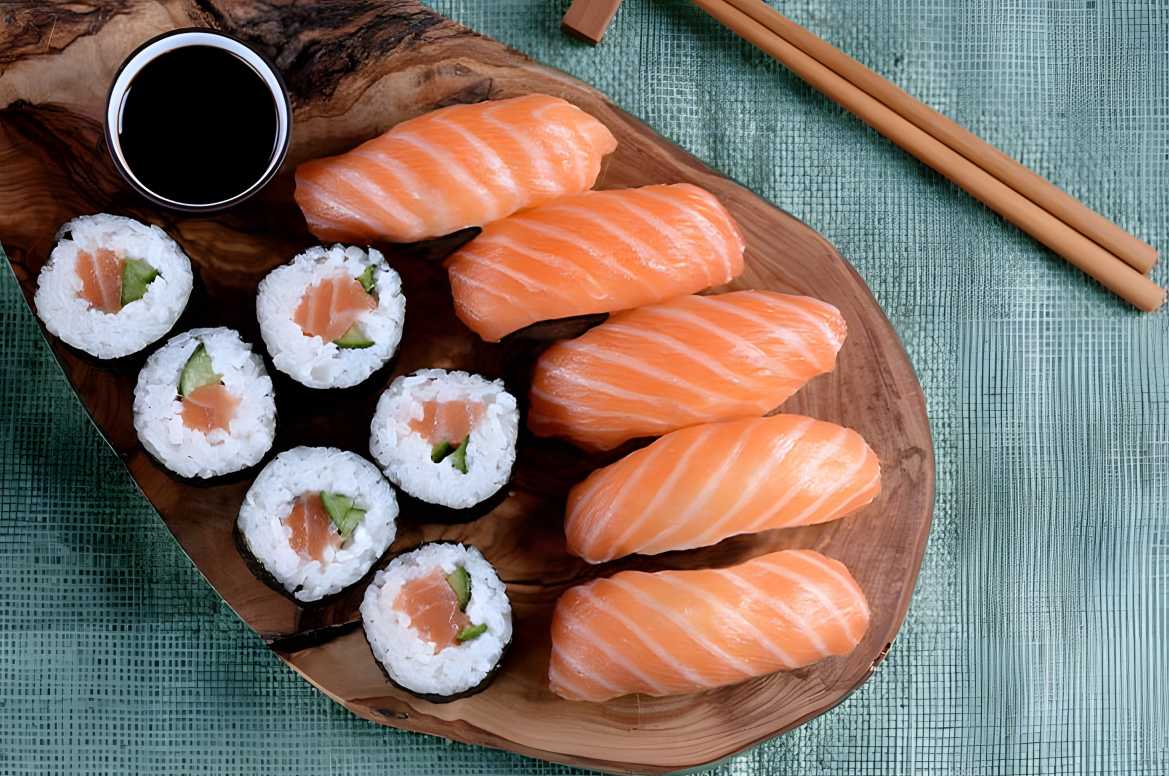 You may wonder why someone who loves Japanese cuisine randomly checks on the internet about “Salmon Sushi Calories & Nutrition Facts” do not be though because it is normal. Most people these days are becoming more and more conscious about their health.

They make sure to check their food intake without depriving themselves of some guilty treats occasionally.

What is Salmon Sushi?

Salmon Sushi is a term coined by both Salmon and Sushi. It is one of the many famous Japanese dishes served by putting a thick piece of Salmon on top of the fermented vinegar rice. 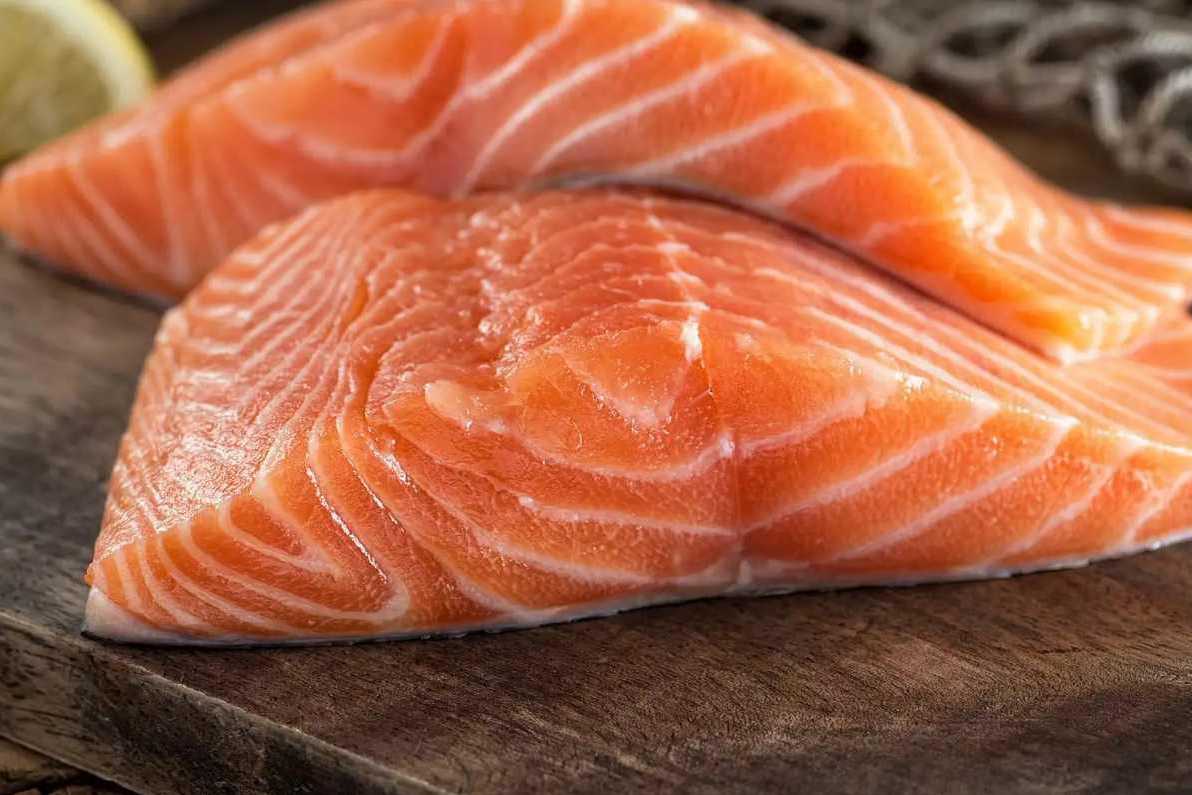 Many people love Salmon simply because it does not only taste delicious but is also one of the many nutritious kinds of seafood in the entire universe. It is one of the many popular kinds of fatty seafood but filled with nutrients that we need every day.

Moreover, it also helps in reducing the potential risks of having different kinds of illnesses.

Salmon is versatile seafood that you can use as an ingredient in any dish, such as sushi. It is not difficult to source salmon because it is widely available may it be locally or internationally.

There are two varieties of Salmon — the wild Salmon and the farmed Salmon. The nutritional values of Salmon vary among these two. Do not worry, though, as they are both a great source of all the essential nutrients we need, including B vitamins, selenium, Omega-3 fatty acids, and phosphorus.

Take a look at the table below to figure out the difference in nutrients between a farmed salmon and a wild salmon:

Sushi is a popular dish in Japanese cuisine. It is a staple rice dish in every meal. It consists of cooked rice that has been fermented with vinegar that is also filled with other ingredients such as egg, vegetables, and of course, raw seafood, which is the staple ingredient. It also has garnishes.

It is eaten while dipping with a sauce or putting wasabi and has to be served cold.

11 Different types of a Salmon Sushi

Salmon is vibrant and very appetizing. Thus, anyone who can see it will drool and may suddenly crave a sushi mukbang. It is a popular dish not only in its origins in Japan, but it has also been making noise even in Western countries.

Learn more about the 11 different types of salmon sushi below and their nutrition facts and calorie count for people who are health gurus like you: 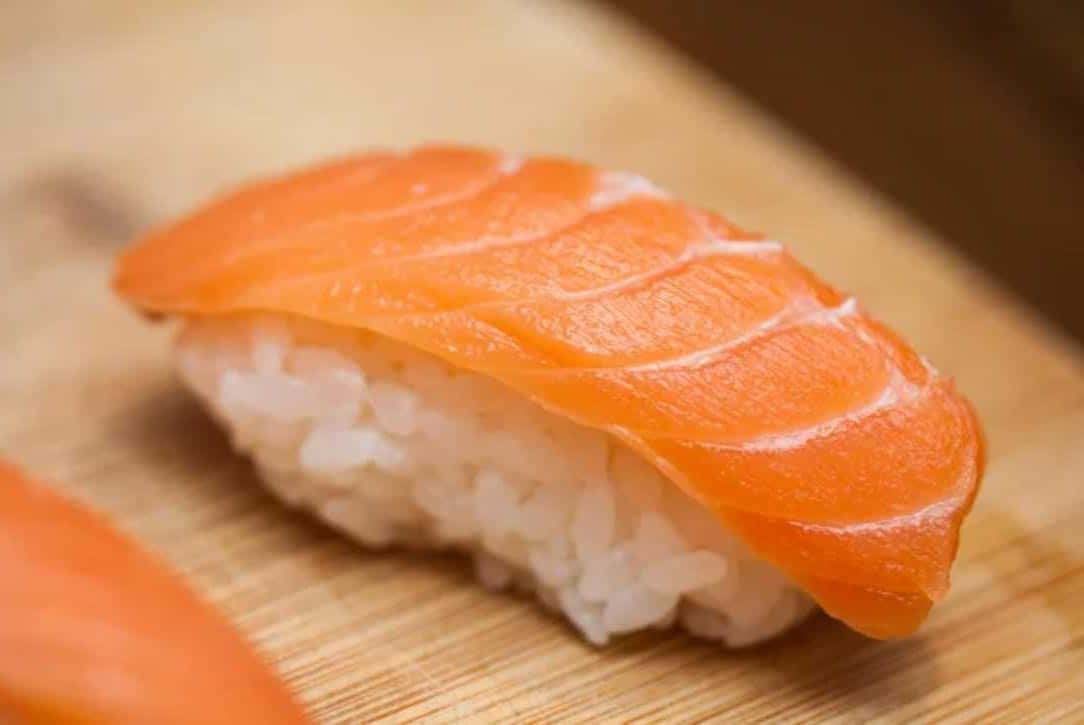 Salmon Nigiri is easy to make. It is the most basic Japanese cuisine where the sweetness and the spiciness of the salmon fat and wasabi work well together. Moreover, salmon sushi is popular and is widely eaten by the locals in nigiri style due to convenience.

Salmon Nigiri is eaten by hand, where a ball of fermented rice has a thin-sliced salmon as its topping. You can eat it as it is, or you can also opt to dip it in a bowl of soy sauce, salt, and calamansi or lemon, or enjoy it with ample wasabi to add some excitement. 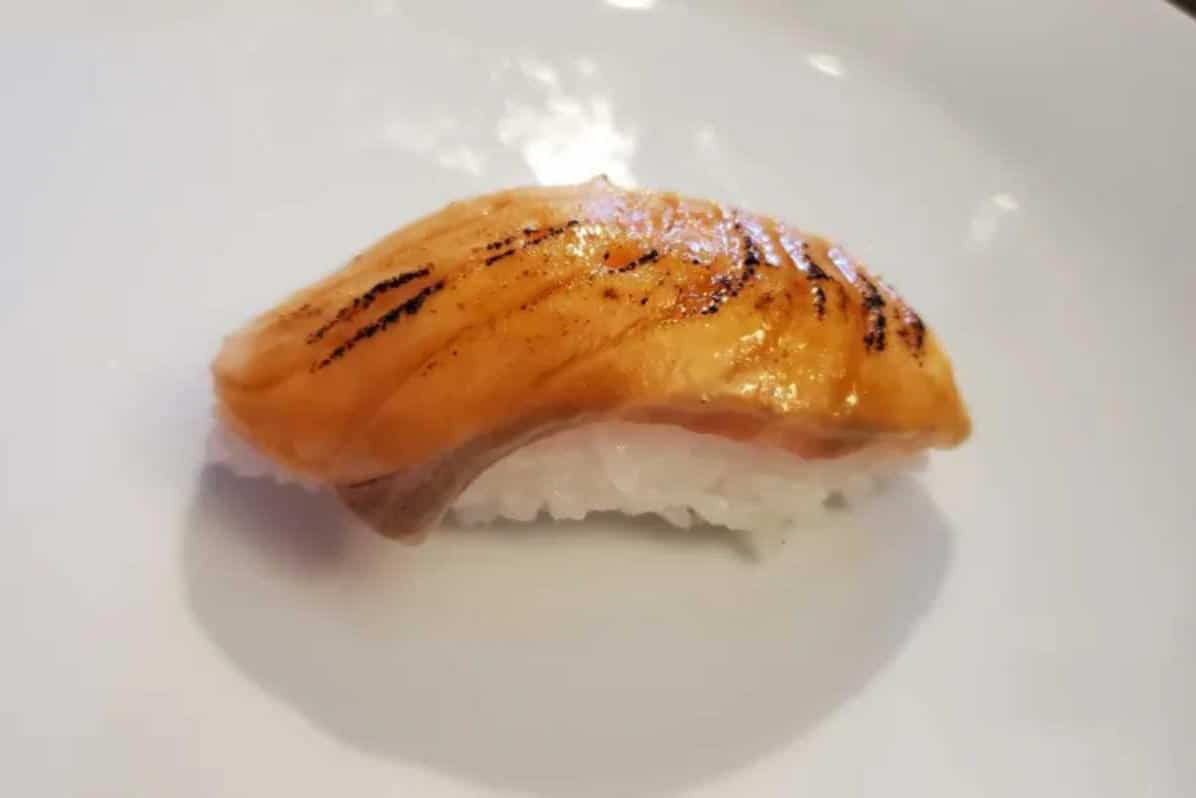 Aburi Salmon Nigiri is quite different from the basic Salmon Nigiri because it has been grilled on its surface. Thus, the juiciness of the Salmon is already gone and instead became condensed.

It is usually grilled by a blowtorch before serving. The creaminess of its center and the grilled surface of its fats complement each other.

You can enjoy your basic Salmon Nigiri by adding some twists such as assorted toppings. Usually, these toppings vary from a pickled plum, pickled cucumber, mayonnaise, or anything else as long as it is rich in flavor.

You can consider trying out or experimenting with different toppings until you find what matches your preferences. 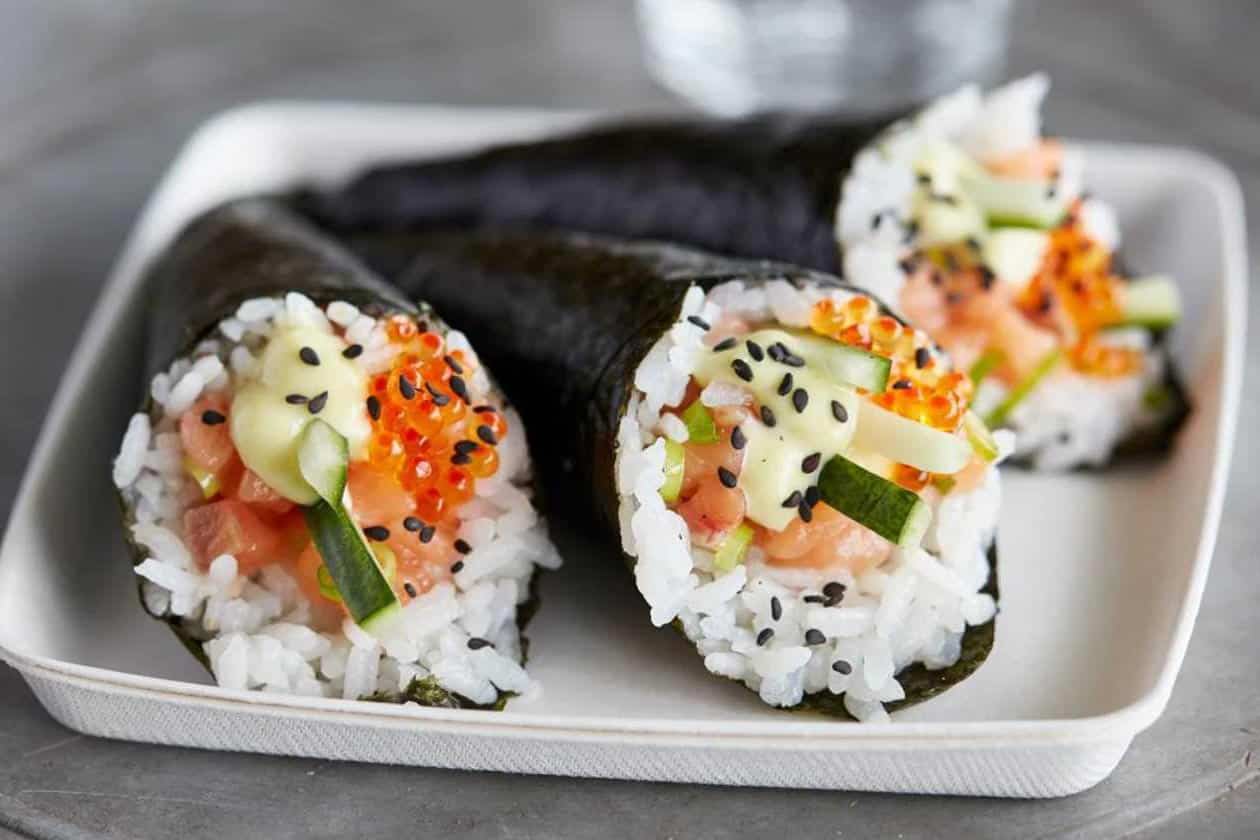 There are many traditional and basic ways to eat salmon sushi: the Salmon Temaki Sushi. It is also known as the salmon hand rolls. Salmon temaki sushi is quite convenient to eat even if you are on the go. Kids love this, too.

You can easily enjoy the Salmon Temaki Sushi as it is usually made out of a small nori seaweed sheet, wrapping the sushi rice with some sliced salmon and other garnishes. It is similar to a cone shape. Thus, is it not messy to eat. 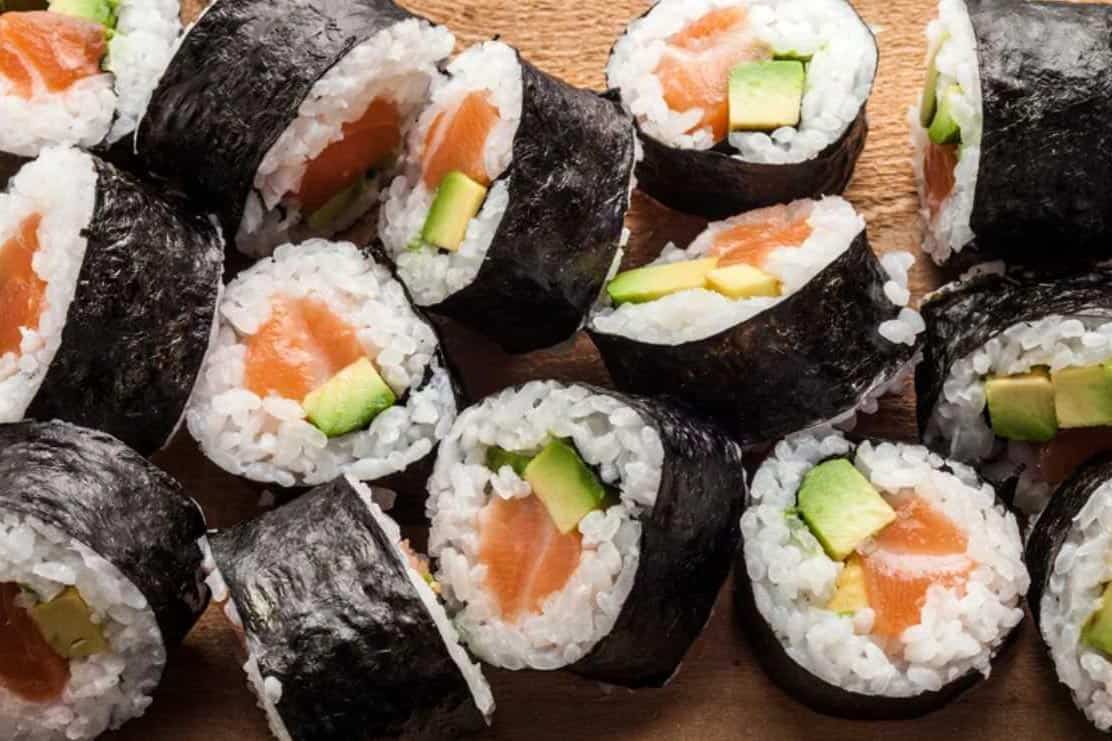 The Salmon Maki Sushi is timeless and has been a staple Japanese dish for the locals and people who love Japanese cuisine. It is a classic sushi roll that emphasizes the perfect combination of Salmon, nori seaweed, and sushi rice.

It is a classic salmon sushi roll that is often vibrant in color with some add-ons such as avocado, carrots, and cucumber. 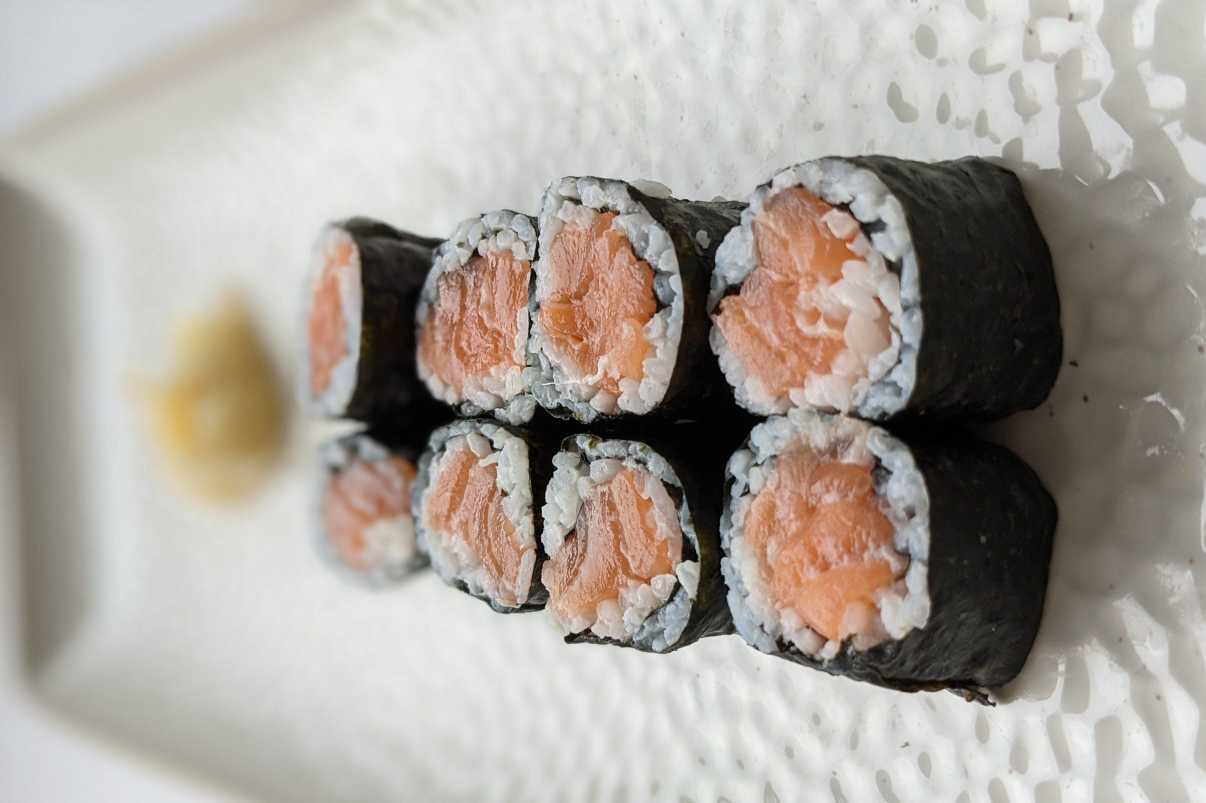 The difference between the Salmon Hoso Maki Sushi and the other maki sushi is that it has only one Salmon filling. Hosomaki Sushi is typically thin sushi rolls. The nori seaweed sheets are exposed. At the same time, both the Salmon and the sushi rice are wrapped around by the nori.

Kazara Maki, in Japanese, means decorative rolls. These are often served for occasions such as birthday parties and other gatherings. It is the complete opposite of the classic sushi roll we often encounter, as this type of sushi has a thin slice of fish wrapped around it. 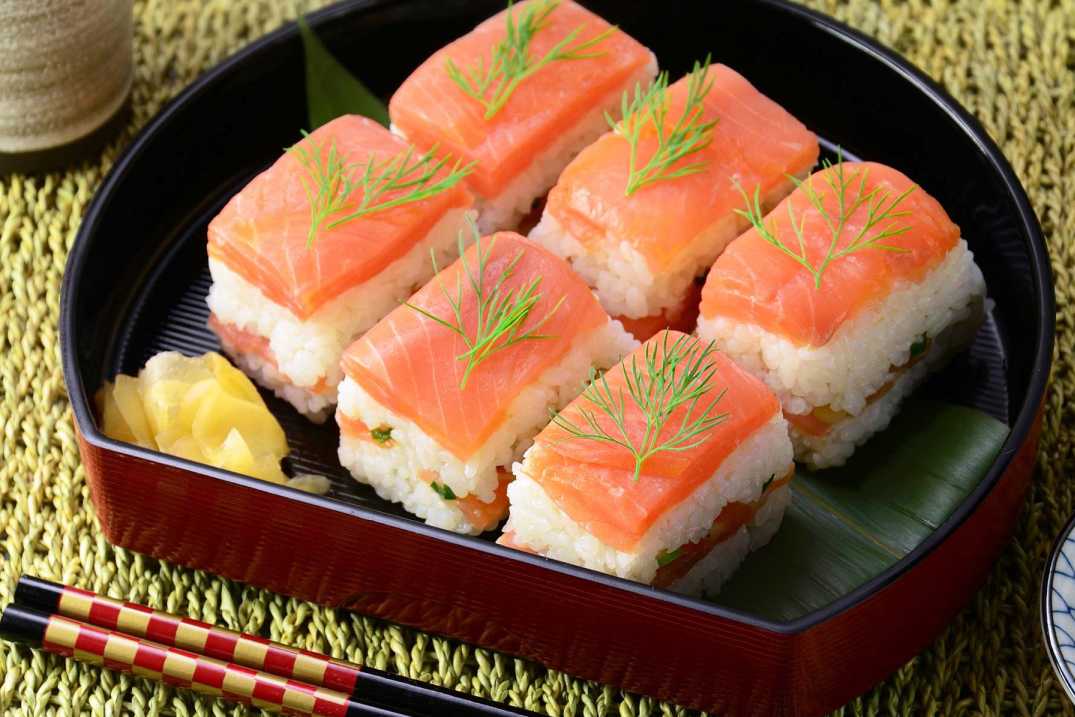 Even though it is called Salmon Oshizushi, it does not use an actual salmon but a trout instead. This is often sold in convenience stores or train station bento- a marketing strategy to familiarize tourists with the Salmon Oshizushi.

Oshizushi means pressed sushi. It is made by pressing the ingredients into a wooden mold in order to form a block shape. 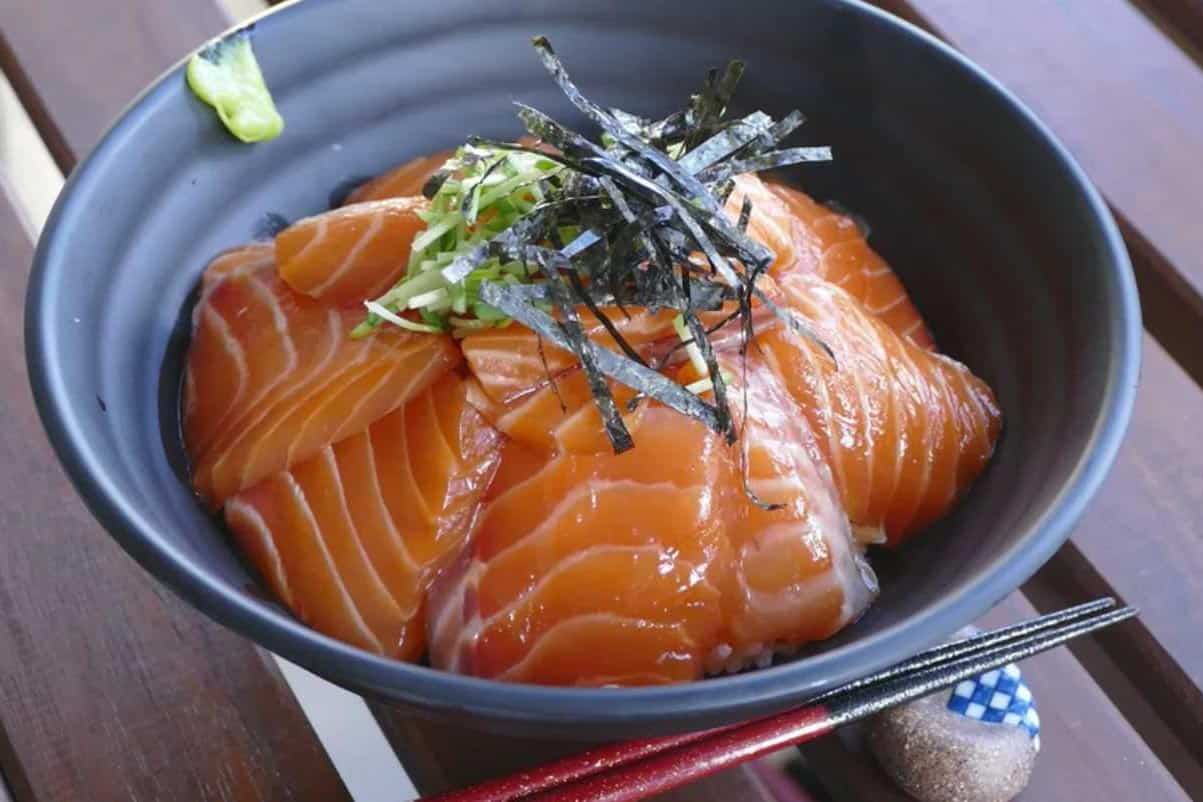 Donburi is a Japanese dish where various ingredients such as cucumber, carrots, and avocados are mixed and put together on top of white rice. On the other hand, the Salmon in Salmon Zuke Donburi is marinated in a mixture of sesame seed oil, soy sauce, and sake. 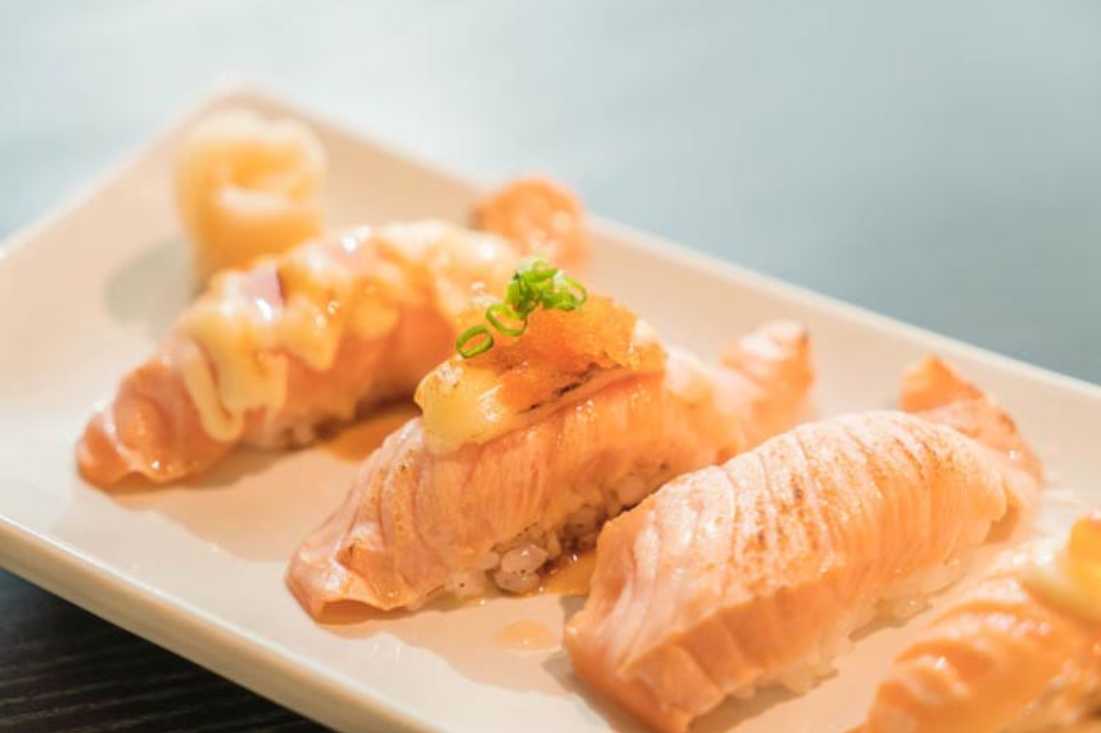 As the name implies, this type of salmon sushi has undergone marination with a Saikyo miso and was cooked using a blowtorch. Moreover, the Salmon’s richness in fats and the natural sweetness of the Saikyo Miso bring harmony and results to a savory dish. 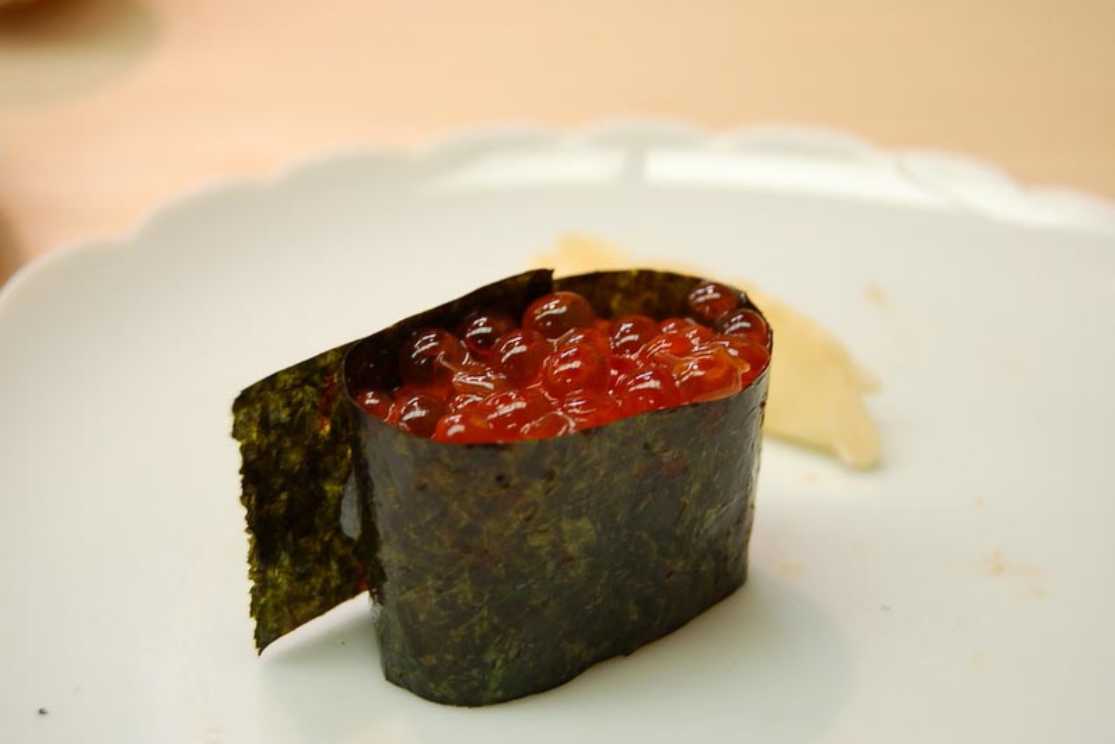 The Ikura Gunkan Maki is usually served in a battleship style where you have to spoon the loose salmon roe. The Ikura, or the salmon roe, has been immersed in a soy sauce for quite some time until it finally absorbed the flavor.

The Ikura Gunkan Maki is a type of sushi with thin strips or thin cuts of the nori seaweed sheet wrapped around the sushi rice. The salmon roe has a vibrant color. 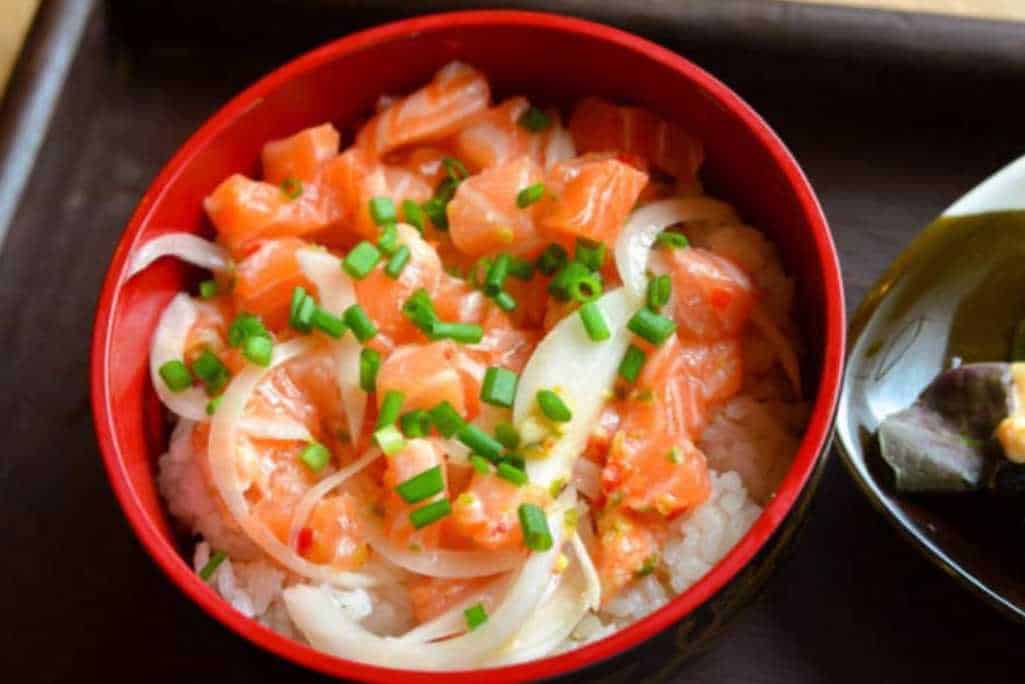 Chirashizushi is somehow similar to Donburi. The Donburi is plated neatly, while the Chirashizushi is unorganized as it means scattered sushi in Japanese. The various ingredients are scattered freely all over the entire sushi rice bowl. This type of sushi dish frequently includes a Japanese omelet or an Ikura to finish it off.

Zuke Salmon is frequently used in Chirashizushi or as a topping for nigiri. It is often grilled after being marinated either by fermented rice, vinegar, sake, or soy sauce to achieve its maximum caramelization.

Most Japanese dishes are served raw. Not everyone is a fan of this concept and dishes, but do not worry because despite it being raw and having a high probability of being contaminated with parasites, it still has a lot of health benefits.

Now that we all know all the Salmon Sushi calories and nutrition facts, despite it being raw, will you continue eating a Salmon Sushi?