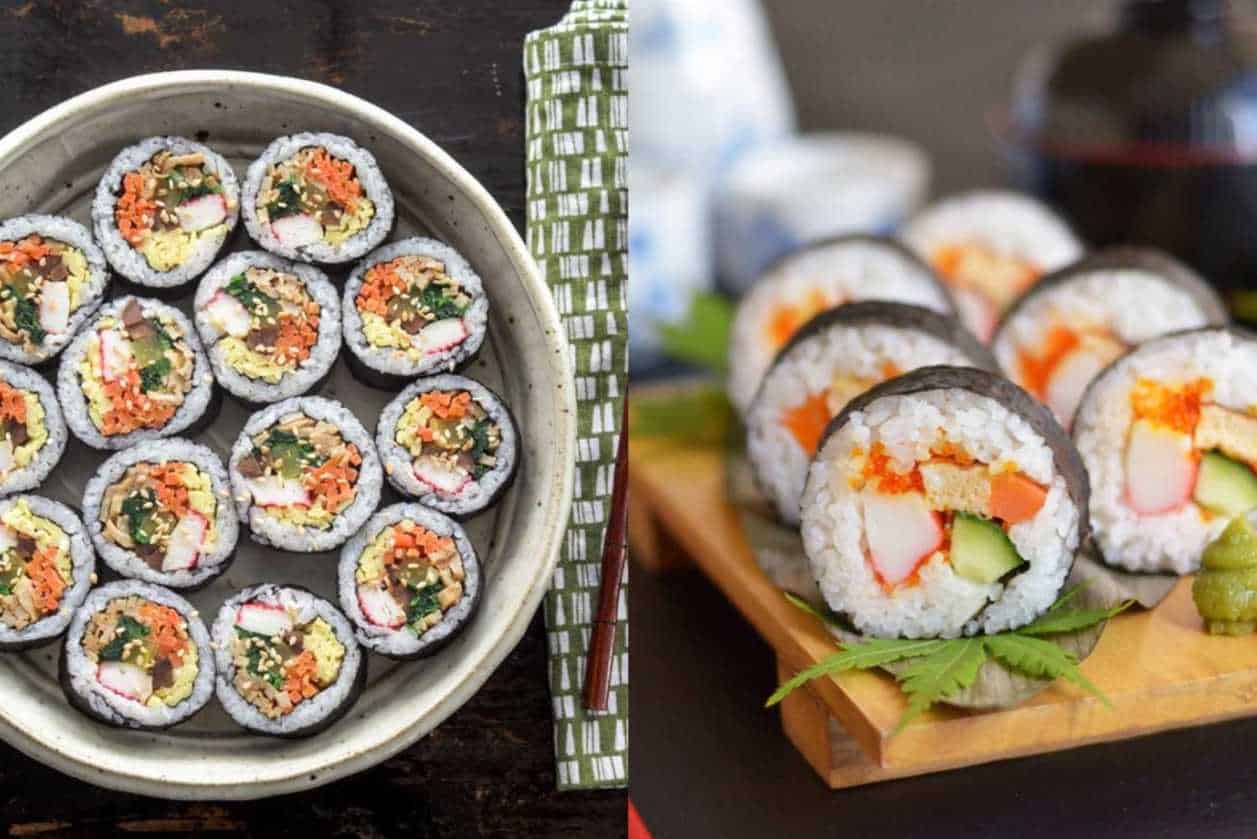 But did you know there’s a Korean-inspired sushi roll? It’s known as kimbap. You’re missing out if you haven’t tried it yet. Kimbap vs. sushi? Taste and see the difference!

Kimbap (also known as gimbap) is a classic Korean food. It’s made with steamed rice, seaweed sheets, and various fillings. The word “kimbap” comes from ’kim’ (or gim) for seaweed sheet and ‘bap’ for cooked rice. The origins and history of kimbap are a source of debate. Depending on whom you approach, you’ll receive entirely different stories!

According to the Japanese, Korean rolling recipes only emerged in the 20th century when Japan conquered Korea.

Koreans at the time loved norimaki, a rolled seaweed form of sushi. So, the Japanese their cooking techniques to create variations with local ingredients.

However, the ordinary Korean populace holds a different story. Korean inhabitants will tell you that rolled rice wrapped with seaweed existed before the Japanese invasion.

Books like Gyeongsang-do Jiriji from the 15th century mention the cultivation of edible seaweed in the country. Many documents also prove that Koreans enclosed cooked rice in seaweed throughout the Joseon dynasty.

Koreans named the dish “bokssam” during the time. It was not until long later that the term kimbap was coined.

Finally, we arrive at the final puzzle piece. Historians say that “kimbap” was first used in a newspaper article in 1935. Koreans used the Japanese phrase norimaki (rolled sushi) interchangeably in literary works and everyday interactions.

After the Japanese rule ended, the phrase kimbap was coined. Koreans tried hard during this period to eliminate any traces of Japanese influence from their lives, including language, products, and teachings. The ‘bap’ in kimbap pertains to the cooked rice part of the dish. When making kimbap, short or medium-grain rice is usually used. Long grain rice has less starch than short-grain rice.

When there isn’t enough starch in the grains, they don’t cling together as well. Thus, it isn’t easy to roll the kimbap. Short-grained rice has a high starch content. Therefore, it is ideal for kimbap.

In addition, when creating various types of kimbap, Koreans frequently utilize black or brown short-grained rice. White rice kimbap is the most frequent type outside of South Korea. That isn’t always the case in South Korea!

Finally, Koreans may use sesame oil and a pinch of sugar to cut the rice. Koreans pour sesame oil abundantly in all their dishes, including kimbap. The sesame oil adds roasted nuttiness and a bit of sweetness to the plate!

Kimbap is wrapped using a gadget known as a gimbal. First, the seaweed sheets are lightly roasted. Then the components of your choice are added.

The meats and veggies are usually placed on a thin layer of sushi rice. The meal is then rolled into a cylindrical form using the gimbal.

Koreans use a variety of filling ingredients in kimbap. These include cooked, raw, and preserved ingredients.

While kimbap does not contain raw meat, it does have raw veggies. Cucumber, green lettuce, and perilla leaves are some examples.

Finally, Koreans roast the dried seaweed sheet and coat it with sesame oil. The coating provides another layer of nutty flavor! You can also serve kimbap with sesame seeds on top!

There are numerous types of kimbap to choose from. You can find many other creative twists on the meal at kimbap booths and restaurants.

However, many people believe that the most prevalent styles in Korea are divided into 13 categories. Here are they:

In Korea, kimbap is well-known as a form of street food. School children and older students can grab a kimbap roll for snacks or lunch.

Adults eating kimbap to relieve their childhood is also a sight to behold. It’s also a popular snack to bring when trekking.

Kimbap is often eaten with chopsticks. But it is also frequently eaten with hands. It is eaten in more casual settings.

Kimbap is frequently served with kimchi, pickled radish, or spicy tteokbokki, a popular Korean street snack. Dip a kimbap slice into the spicy tteokbokki soup for an outstanding combo.

Sushi is a Japanese meal produced by layering vinegar-soaked rice with various fillings, including raw or cooked fish and vegetables.

Sushi is a more significant Japanese culinary category than kimbap. Sushi, unlike kimbap, does not require the use of seaweed. The term sushi is derived chiefly from the method of rice processing. Sushi has been around since the second century. The Japanese at the time preserved fish for later consumption by storing it for months in fermented rice. They would typically toss away the rice before eating it.

The term narezushi refers to the abovementioned method of preserving fish. Sushi translates to sour-tasting.’ It derives from an out-of-date vernacular.

If you still want to experience narezushi, you can visit Japan’s Shiga Prefecture. They still produce funa-zushi, a regional variation of this dish.

Norimaki (rolled sushi) was not invented until 1716 by the Japanese. According to a historical Japanese text detailing Japanese cuisine and production, the origin of norimaki occurred in that period. Sushi derives its sour flavor from the addition of vinegar to cooked rice. Rice, not vegetables, meat, or fish, is the most significant component.

Sushi is not considered delicious quality in Japan if high-grade components are combined with inadequate rice preparation. Rice is both a goal and an art.

You can make sushi with various methods. The most common is laying a seaweed sheet on a makisu, a bamboo mat. The components are stacked on top of the sheet, then rolled to compact the sushi into a spherical shape. Most notably, the word “sushi” refers to sour rice that has been vinegared. Some sushi includes stuffing, while others may have toppings. They do, however, all contain rice.

Sushi is made from short or medium-grained white rice that has been mixed with vinegar, sugar, and salt. Japonica is the type of rice that the Japanese use to make sushi.

Compared to other rice cultivars, Japonica rice is starchier. The added starch imparts a sticky feel to the cooked rice. As a result, Japonica rice is easier to consume with chopsticks. It is also great for shaping into sushi rolls.

The Japanese use likes to use raw ingredients like salmon and tuna. They also use mackerel, chopped scallops, and other raw seafood. Raw veggies such as cucumbers are also frequently used.

Do you prefer cooked items in your sushi? The Japanese do! They occasionally use cooked foods. Egg and cooked eel and egg are two of the most well-known examples.

Like kimbap, you can prepare sushi in several ways. Unlike kimbap, the styles are not primarily determined by the filling components.

Sushi doesn’t have to be served on a roll or contain any dried seaweed. Here are some examples of many varieties of sushi:

You can eat sushi with chopsticks like kimbap.  However, sushi is frequently regarded as a high-end dish reserved for special occasions. In contrast, kimbap is more casual.

Sushi is generally served with soy sauce and wasabi in restaurants. Omakase meals are available in almost every restaurant in Japan.

Chefs use the term “Omakase” to surprise diners with sushi and other meals made using fresh seasonal ingredients.

Kimbap vs. sushi? Have you tasted one or both? They are tasty Asian cuisines that are remarkably similar. Consider kimbap and sushi to be more like siblings than twins.

They differ in origin, ingredients, preparation, and types. For starters, the white rice in both rolls receives different treatment.