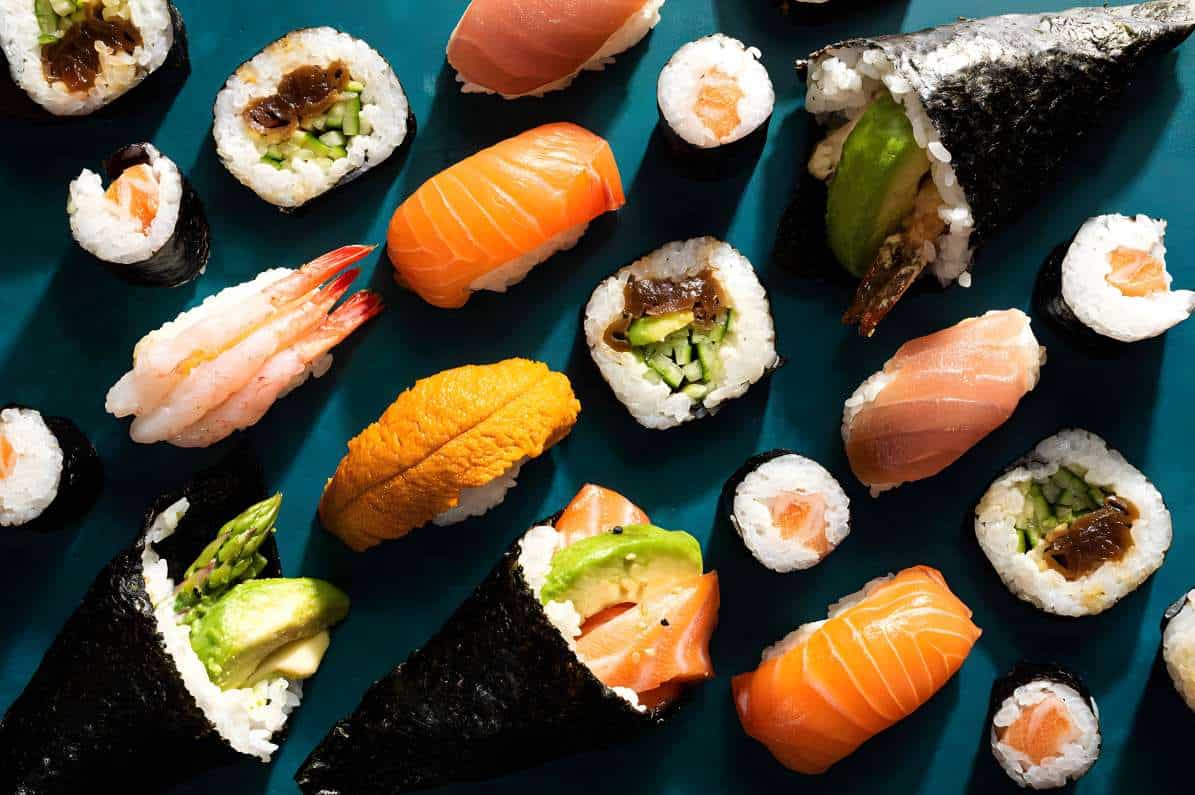 Sushi is one of the most popular foods in the world. But do you know where and how it began? Have you ever wondered if sushi is Japanese or Chinese? If you have, well here’s something that can give you clarity. 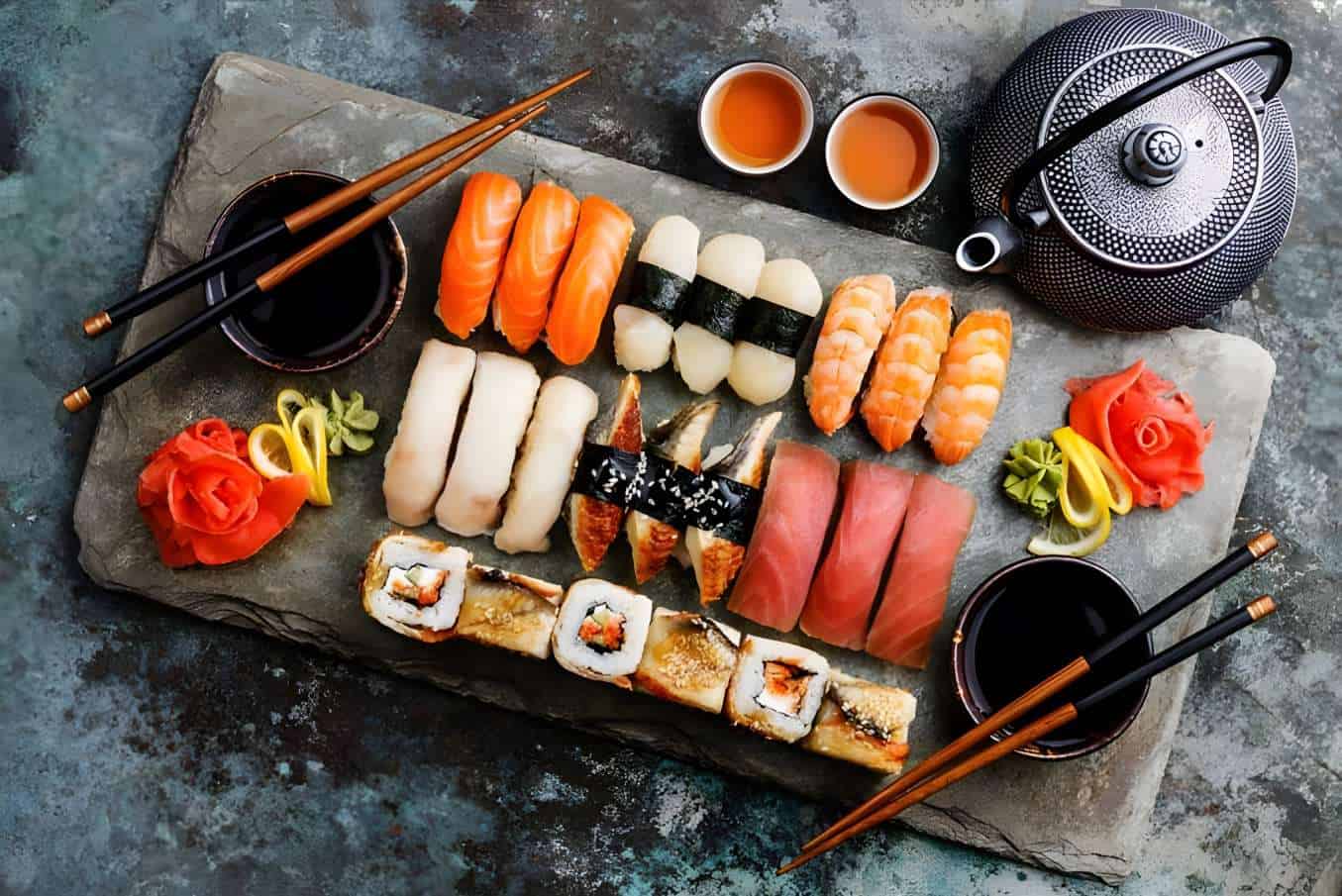 It’s always fascinating and interesting to learn about the origins of some of the most famous dishes in the world. Some people might think it’s just food. But there’s more than meets the eye. And this is particularly true with sushi. It has an engrossing history that you might be interested in.

You have to transport yourself to the rice paddies of China if you want to know about sushi’s past. Rice is a staple in Asian culture. It’s no surprise that many Asian dishes are rice-based, including sushi.

Some historians trace the origin of sushi from around the 3rd century BC. The process they had then had something to do with fermentation. Rice and fish were salted as a form of preservation.

Through fermentation, it kept microorganisms, such as bacteria, from growing, thus preserving the fish. After a period of time, the Chinese would take the fish out. They only ate the fish and threw the rice away. The grain’s role was just for preservation purposes only.

There are also traces of similar fermentation practices in the South East Asian region. Perhaps it’s because of the fact that rice and fish were also abundant in these parts. You can still see remnants of these preservation and fermentation techniques in these locations today.

The fermentation method of the Chinese was probably brought by those spreading Buddhism in Japan. It arrived in Japan around the 8th or 9th century. It was eventually referred to as Narezushi.

As Buddhism continued to spread around Japan, so did their food fermentation process and other teachings and routines. These have greatly influenced some aspects of Japanese culture and history, including food. And these are still evident even in modern Japan.

If the Chinese only ate the fish and discarded the rice, the Japanese thought the other way. As time and Japanese society progressed, they started to ferment the fish for a shorter period and ate it with pickled rice. This was called namanare.

Narezushi has undergone many significant changes. There have been mentions of sushi in ancient Japanese literature, including the Yoro Administrative Code. Despite time passing by, the essence of sushi from yesteryears remains. And it continues to this very day. 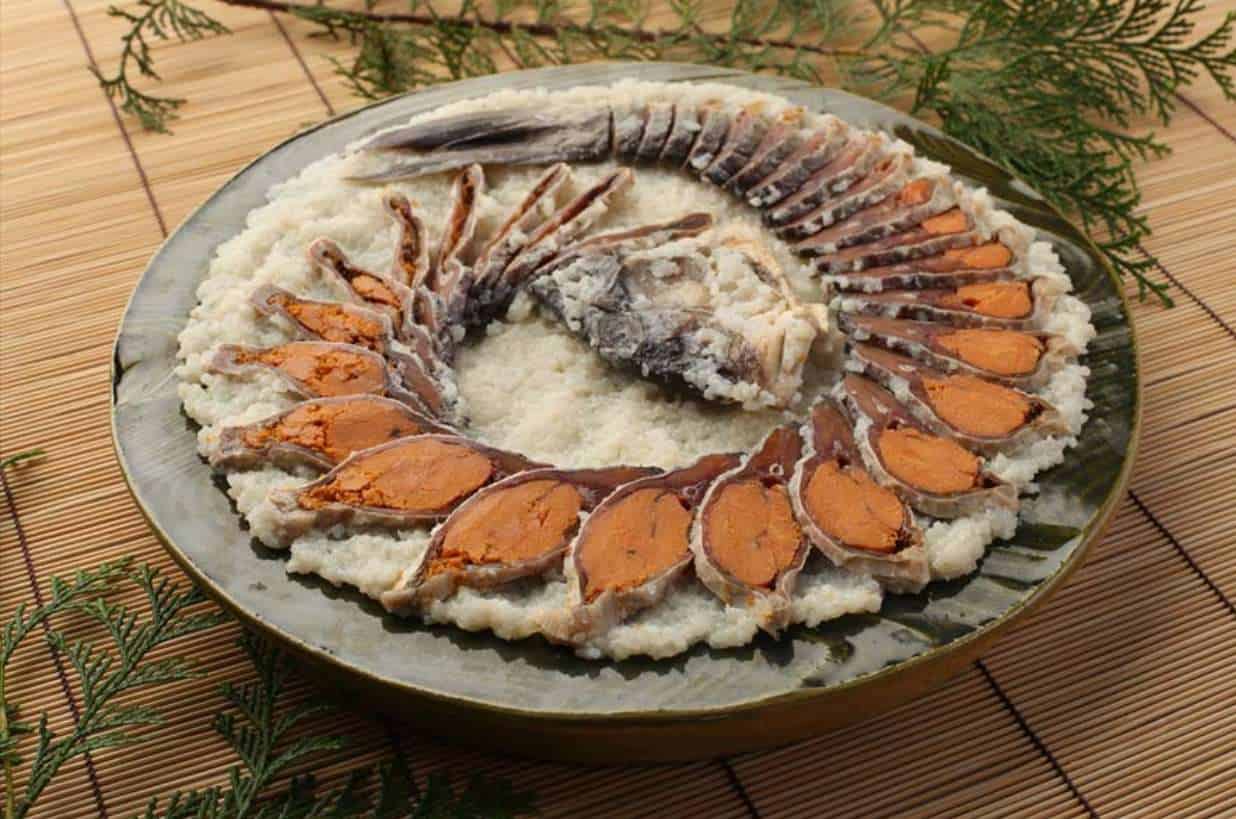 Funa is caught from Lake Biwa, located in the Shiga Prefecture. There are several preservation and fermentation processes involved in making Funasuzhi.

It takes quite a long time before this dish is ready. It can take about a year or up to three years. Sometimes even more! The first process involves leaving fish and salt in a barrel for about a year.

After that, the wooden tub is opened and the fish is taken out. The fish will then be mixed with rice and fermented for years. After two to three years, the fish is ready to be served.

Nowadays, there aren’t a lot of places serving Funasuzhi compared with other types of sushi. However, there are still restaurants in the Shiga Prefecture serving or selling the dish using the thousand-year-old fermentation techniques.

Meet The Father Of Nigiri Sushi

Perhaps one of the most significant evolutions of sushi in Japan happened when they started adding vinegar to the rice. The vinegar sped the fermentation process up.

People were now able to eat sushi without having to wait for the seafood and rice to ferment. This was called Hayazushi. Fish and vinegared rice were put together by hand. The process was faster, leading people to eat it more.

With the popularity of vinegared rice with fish or other seafood, a man named Hanaya Yohe thought of something that would eventually be the forefather of the sushi we know today.

Hanaya Yohe developed the nigiri sushi and opened a stall in Edo. Since he was located near the coastline, he had easy access to fresh fish. He combined salt, rice vinegar, and cooked rice and topped it with raw fish.  It became so popular that other stalls popped up.

The sushi we know now is probably a product of Nigiri sushi’s progression.Every single time you bite into sushi, perhaps give a big thanks to Mr. Yohe for being one of the game-changers of the sushi world. Without people like him, you would have had to wait for ages before you can get to eat your favorite sushi! 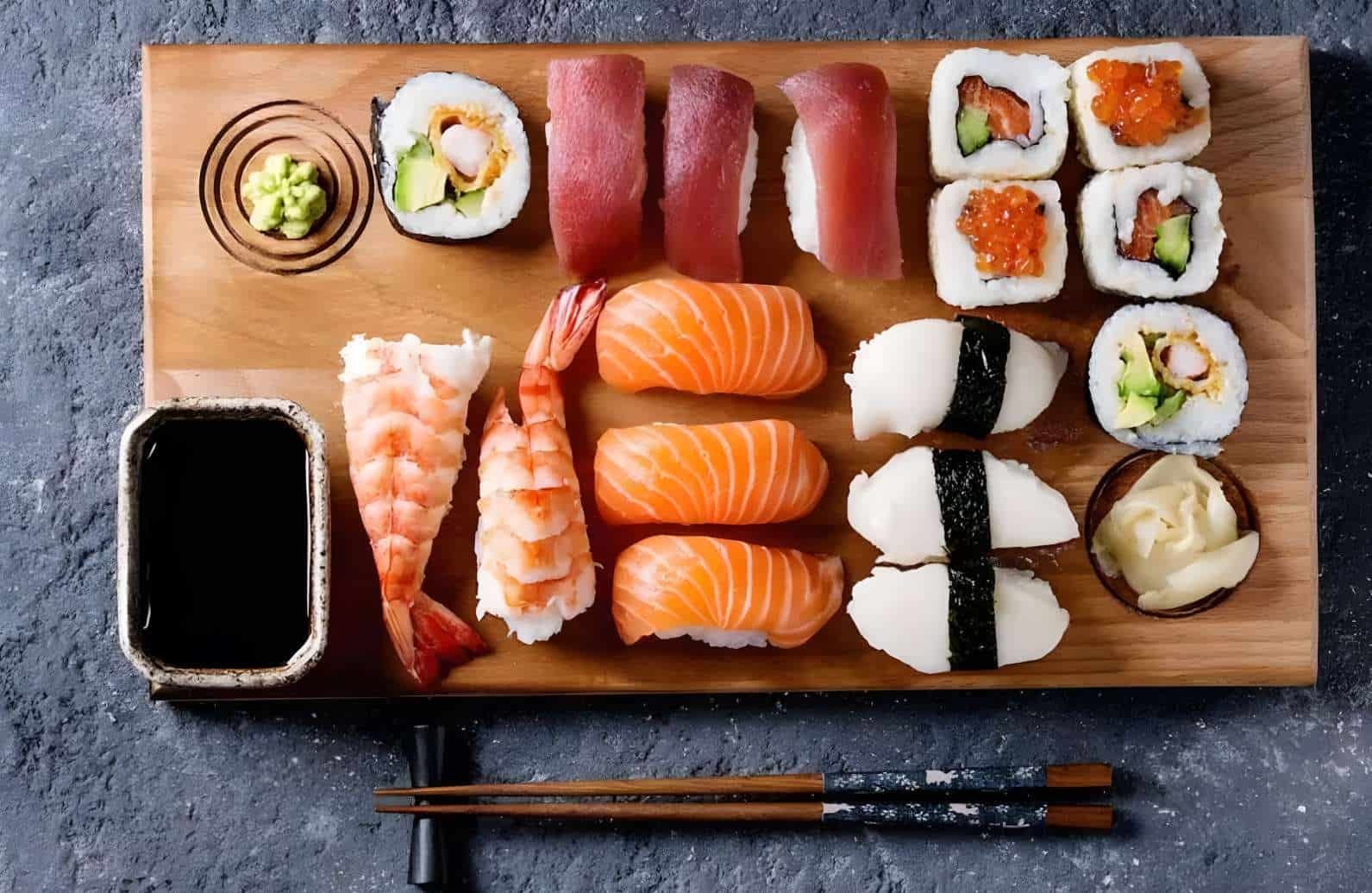 In the early 1920s, Japan was rocked by one of the worst disasters in its history  – the Great Tokyo Earthquake. Due to this tragic event, people fled Tokyo. Among those who left the city and settled in other parts of the country were the nigirizushi chefs.

When they moved to new places in the country, they also brought nigirizushi with them, introducing it to more people. Around this time, they were able to find more permanent locations to sell sushi. Before then, sushi was mostly sold in the streets.

People were now able to enjoy their sushi inside restaurants. And in no time, the whole country embraced sushi even more, making it one of the most popular Japanese dishes. From being a street snack, it’s status elevated to a fine dining option. Eventually, it became one of the representative dishes of Japanese cuisine.

Sushi And The World 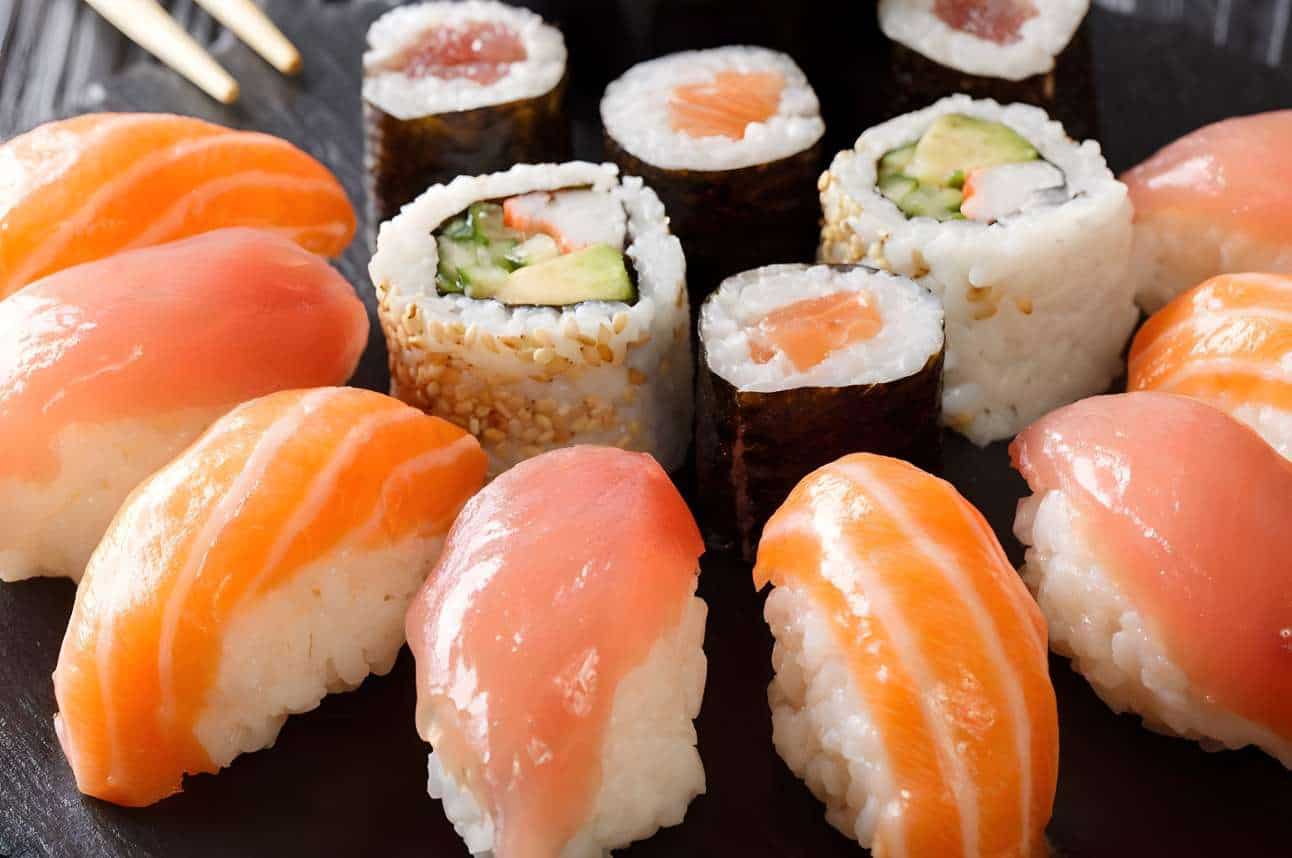 Sushi’s growth in Japan spread like wildfire. Its popularity kept rising, prompting more restaurants to open. And in no time, the rest of the world got to know sushi.

Sushi gained prominence in the US around the 1960s. But it was first introduced in the West due to Japanese immigrants sometime in the 1900s. One of the strongest evidence of sushi’s rise in the United States is the California Rolls.

There seems to be some debate on who invented the California Roll. But there’s one thing that’s clear for everyone, it became one of the most popular types of sushi in California and eventually the rest of the country.

Apart from the traditional Japanese sushi, chefs have injected their modern interpretations of this beloved dish. And whether you are into the long-established sushi variety or its more contemporary type, there’s something for everyone!

Sushi has truly come a long way – from the Chinese rice fields to the streets and stalls of Edo Japan, and now, in modern times, everywhere in the world! In the United States alone, there are over 15,000 sushi restaurants. If you are a sushi-lover, take a chance and book a trip to the Land of the Rising Sun and indulge in their traditional sushi.

From China To Japan To Korea

If the Chinese brought the idea of fish fermentation to Japan, which led to the birth of sushi, the Japanese also brought it to Korea. Some theories say that the Kimbap, a seaweed rice roll, was introduced to Korea when Japan invaded it in 1910.

It was similar to norimaki, a type of sushi. However, Kimbap was stuffed with vegetables and other ingredients instead of raw fish or seafood. Some people might disagree, and say that Koreans have been eating rolled rice even during ancient times.

Regardless of the exact origin, it’s still intriguing to know that they seem to share the same core ingredients. It’s once again a testament of how food evolves and adapts.

While the Chinese might have had the earliest know-how of how to preserve and ferment fish, the Japanese adopted and refined the processes.

Through their dedication, sushi became what it is today. It has become its own artform. People go to sushi school to learn and hone their skills. It’s safe to say that sushi is truly Japan’s. Imagine going to Japan and saying otherwise!

Modern day sushi can be found In Japan and anywhere else in the worldi. And you can find these common sushi varieties. They are usually made with sushi-grade fish such as Yellowtail, Tuna, Salmon, and Halibut.

Whether sushi is Japanese or Chinese, there is no doubt that it’s one of the most well-loved foods around the world. If there’s one thing that’s clear, sushi is genuinely an Oriental treasure that needs to be admired and savored by everyone!