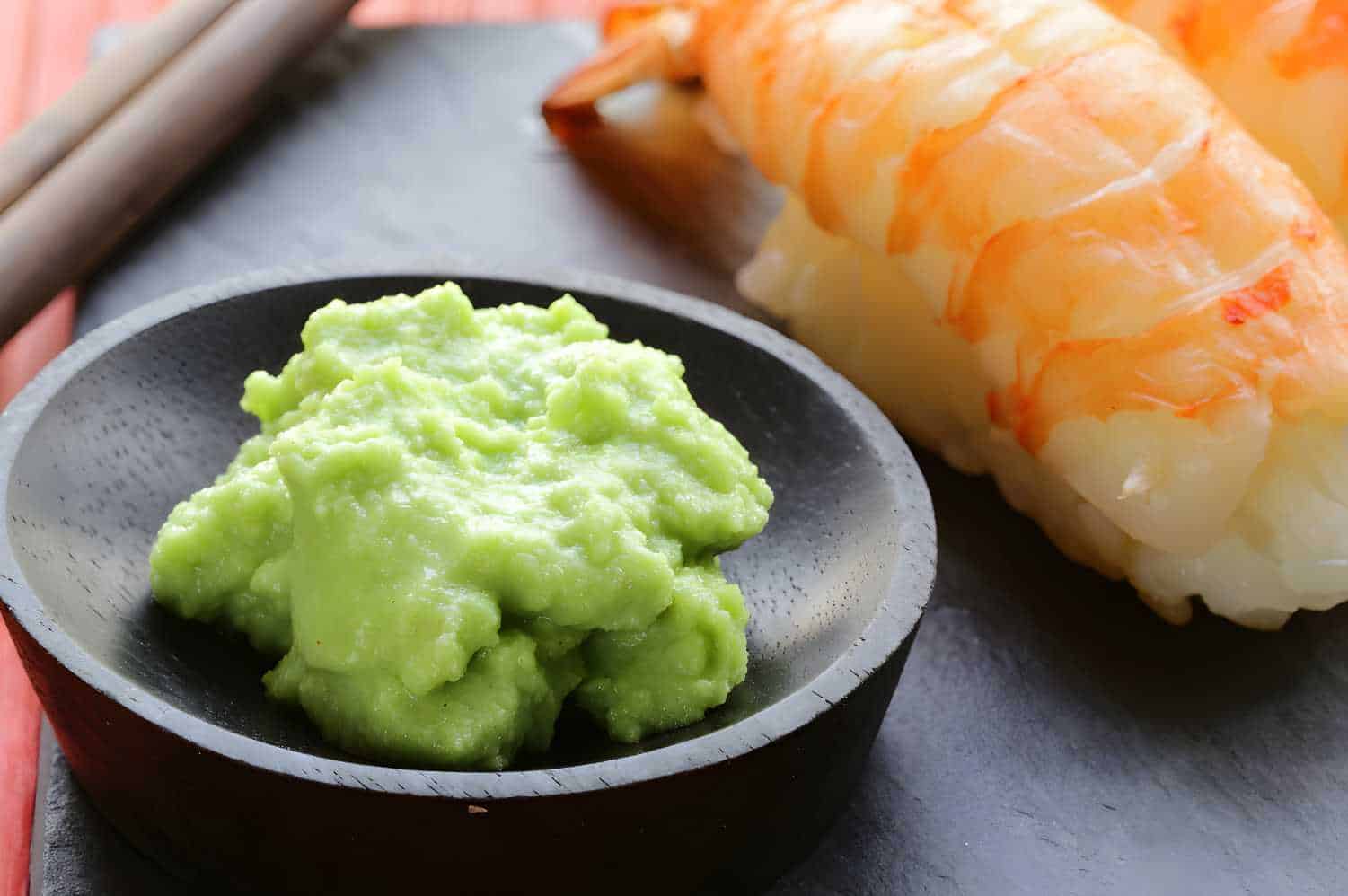 Sushi lovers often accompany their sushi with the popular paste ‘Wasabi,’ a green paste with excellent taste and aroma.

Not many culinary food experiences beat the feeling of dipping your sushi into it and savoring the combination with your mouth. Besides, wasabi is good for your health, making it a perfect accompaniment with sushi. Wasabi is a popular Japanese paste made from the Wasabi plant, also known as Japanese horseradish.

The paste or powder is gotten by grating the rootstalk or rhizome before serving to prevent its exposure to air, which may lose its flavor. The Wasabi plant is scarce as it usually takes a year or more of rigorous manual farming to grow.

Besides, it grows in specific environments with specific atmospheric conditions, making it very hard to come by and extremely expensive to purcmak.

This is why most people prefer to use horseradish as a substitute. Therefore, when you order sushi and wasabi in a restaurant that offers horseradish, don’t be surprised. The differences are not conspicuous, but a few are

Why Should You Eat Wasabi? Wasabi is a healthy food containing various nutrients essential for maintaining the human system. Here is a nutrition table for a tablespoon of wasabi paste:

Should You Eat Sushi with Wasabi? Yes, of course, sushi should be eaten with wasabi; however, in the right amount of wasabi. Usually, wasabi is eaten with sushi.

It was ordinarily used to prevent the bacteria from eating raw fish, but now, it is also used to enhance the sushi flavor. But if you don’t like wasabi, you can eat your sushi without it or opt for other worthy accompaniments.

It is important to note that people with stomach ulcers, heartburn, digestive disorders, gastritis, and pregnant women should not eat wasabi due to its spicy nature.

How To Eat Wasabi With Your Sushi Usually, wasabi is eaten with sushi with your hands. However, many sushi lovers aren’t aware of this in this modern time.

If you’re using your hands, wash your hands and dry them with a neat towel. Pick up your sushi and dip one side into the soy sauce while you spread a tiny bit of wasabi on the fish and enjoy.

If you’re not comfortable eating with your hands, you can use chopping sticks. Using your hands for wasabi and later putting it in your eyes will not end well, so using chopsticks is better. Use the chopsticks to pick up the sushi.

Dip one side of your sushi into the wasabi. This is usually raw fish without the rice, your sashimi, or nigiri. When eating nigiri sushi, dipping the rice inside soy sauce will break it apart. Instead, dip in only the fish and place it on your rice.

Turn the sushi to the other side and dip it into your soy sauce. Quite simply, coating each side of your sushi makes it more enjoyable.

You can also use chopsticks to pick a bit of wasabi and place it on one side of the sushi, usually by spreading it, while you dip the other side in soy sauce.

Wasabi added to sushi and soy sauce should be eaten in one bite.

If you want to add ginger, eat it after your wasabi and sushi to cleanse your palate. This enables you to enjoy the taste of subsequent fish bites. However, note that you shouldn’t mix soy sauce and wasabi or eat your sushi wasabi and ginger all in one bite. It is considered disrespectful to the chef in Japanese tradition. Instead, enjoy each differently.

There are different ways to enjoy your sushi and wasabi. So, choose what suits you. You can also get more ideas in any respectable Japanese restaurant.

How Much Wasabi Should You Eat With Sushi? Wasabi is nutritious, delicious, and flavorful. Usually, the sushi chef determines the amount of wasabi you should eat by adding it to your sushi.

As such, you don’t need to add the wasabi yourself, except you want something spicier. Besides, overeating wasabi isn’t healthy. Why?

Due to its high sodium content, too much wasabi can lead to high blood pressure. The human system only needs small sodium to function correctly, about 500mg, but one tablespoon of wasabi contains 542 mg, which is more than enough.

Overeating wasabi will only make your mouth hot since it is pretty spicy. It can also cause allergies. Also, fake wasabi contains gluten which is dangerous to hypertensive people.

Liver damage: Wasabi consists of hepatotoxin, a toxic chemical substance that can damage the liver. Though not harmful in small quantities, watching the amount of wasabi you consume to prevent liver damage is advisable.

Too much wasabi can get you hospitalized as the horseradish pasta contains a lot of spice, and eating it with too much water can damage the body. For example, eating 100g of wasabi in one sitting is a lot and can complicate your health.

However, it depends on the person’s tolerance to heat.

Some can consume as much as two teaspoons of wasabi, but if you feel your level of heat tolerance is less and you are prone to have burning sensations in your throat or nose, then it is better to eat a smaller amount of wasabi with your sushi.

Can You Make Wasabi Paste Yourself? If you are trying sushi for the first time and want a mind-blowing experience, you should choose wasabi as a side dish for your meal.

Wasabi is a great condiment as it is very nutritious and beneficial to the body. However, don’t overdo it, as too much wasabi can spoil the experience.