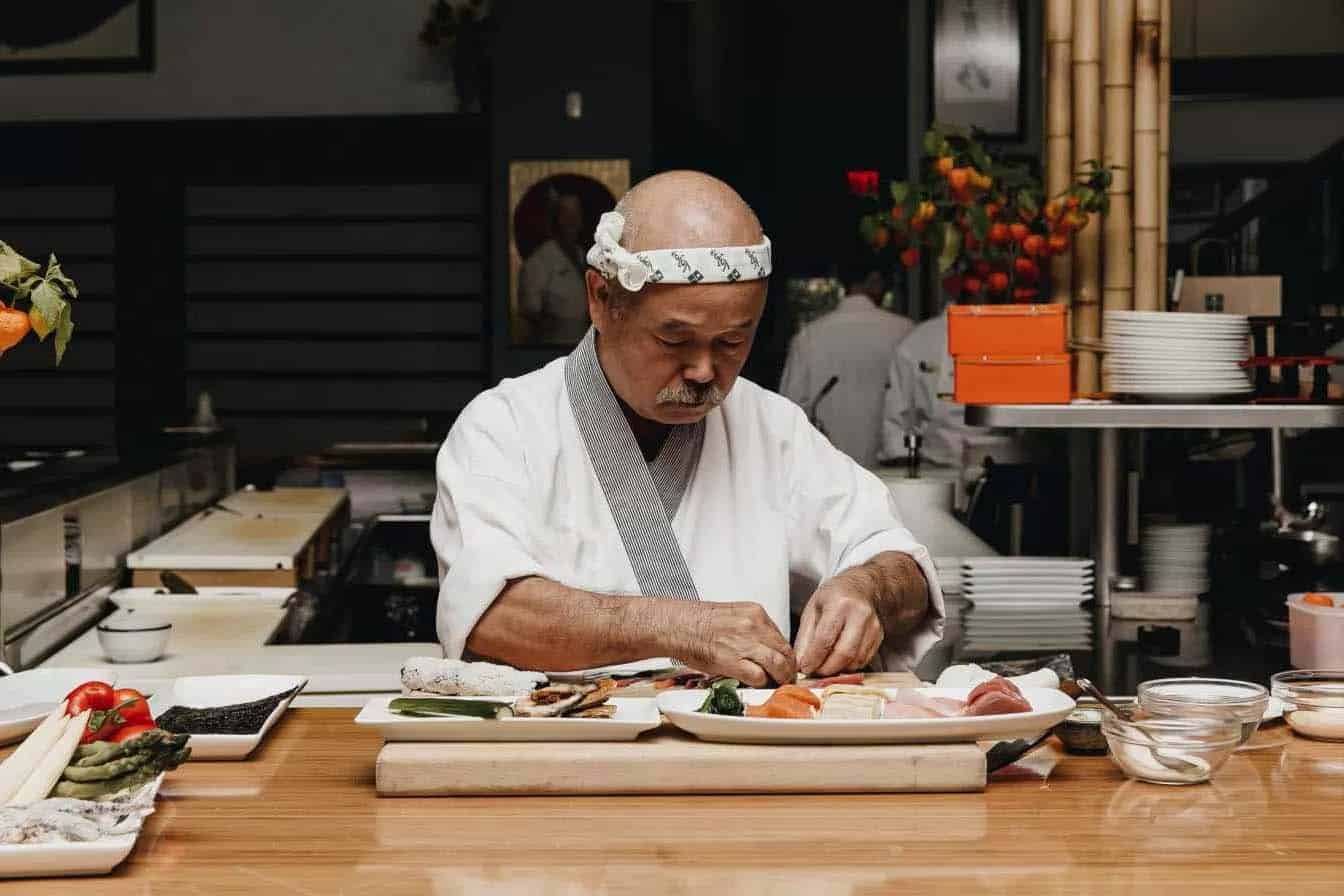 Sushi is a famous Japanese that captures the stomachs of nearly all people in the world. Everyone wants to have sushi. After all, the ingredients look basic. All you need to do is mix seaweed, fish, vegetables, and rice.

So, we all think that preparing sushi is not that hard. However, we do not realize that the man behind all sushi rolls has to go through years of hard work.

In this guide, let’s talk about becoming a sushi chef, their qualifications, skills, and responsibilities. Here we go!

What are Sushi Chefs? 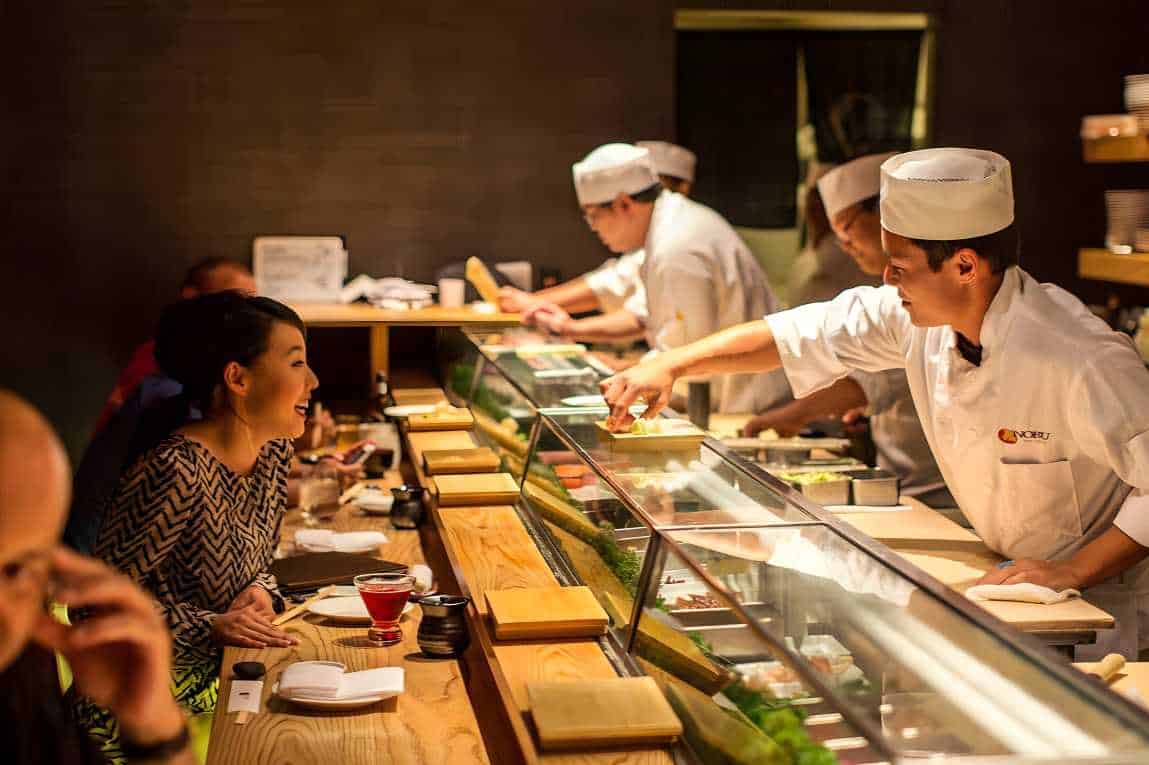 Sushi Chefs are food preparation specialists who go through years of training. They make vinegar rice topped with vegetables, meat, or fish like a pro. Also, sushi chefs are experts in preparing other Japanese dishes like udon, tempura, and ramen.

People expect sushi chefs to master the skill of cutting raw dishes such as nigiri and sashimi. In Japan, sushi chefs are called ‘Itamae’ or in front of the board. Itamaes master the craft of making sushi rolls.

Sushi chefs know how to make traditional Japanese sushi rice, slice, chop, and prepare different kinds of fish. Along with that, sushi chefs should learn how to customize the orders of guests based on their style.

How to Become a Sushi Chef?

Suppose you have ever eaten in a Japanese restaurant and wondered who is preparing such fantastic dishes. Probably, that’s no other than a sushi chef.

However, becoming a sushi chef takes determination and patience. It is not the most straightforward job to achieve. Becoming sushi requires commitment for life. On top of that, it will take years for one to earn the title ‘Itamae.’

It takes a decade to know the basics of being a sushi chef for some. So, the question is, how do you become a sushi chef? And how long will it take to be one? So, here are the detailed steps to becoming a sushi chef.

1. Starting as a Kitchen Apprentice

Every sushi chef starts their career being a kitchen apprentice. One can learn sushi preparation and make it at culinary school. But the most excellent way to know the art of making sushi is to work from the bottom to way up.

Most often than not, culinary schools are not enough to teach students the required discipline to be an Itamae. At first, apprentices will start their journey by cleaning duties.

Cleaning duties include scrubbing and washing. These responsibilities will teach them how to work hard. Once the kitchen apprentice proves themselves worthy, their master will give them a promotion.

Now one has become a successful kitchen apprentice. The next step to becoming a sushi chef is knowing the art of rice preparation.

Making perfect sushi rice is not an easy job. There’s an art in everything. On top of that, rice preparation requires style and precision. So, masters give only this task to their trusted apprentice.

The master chef or Itamae will carefully monitor the student. At the same time, it makes the rice, mixing it with vinegar and salt. The student should master this craft and keep the sushi rice intact.

Once students show that they can make quality sushi rice without any supervision from the sushi chef, the master chef will promote them to being a wakiita. 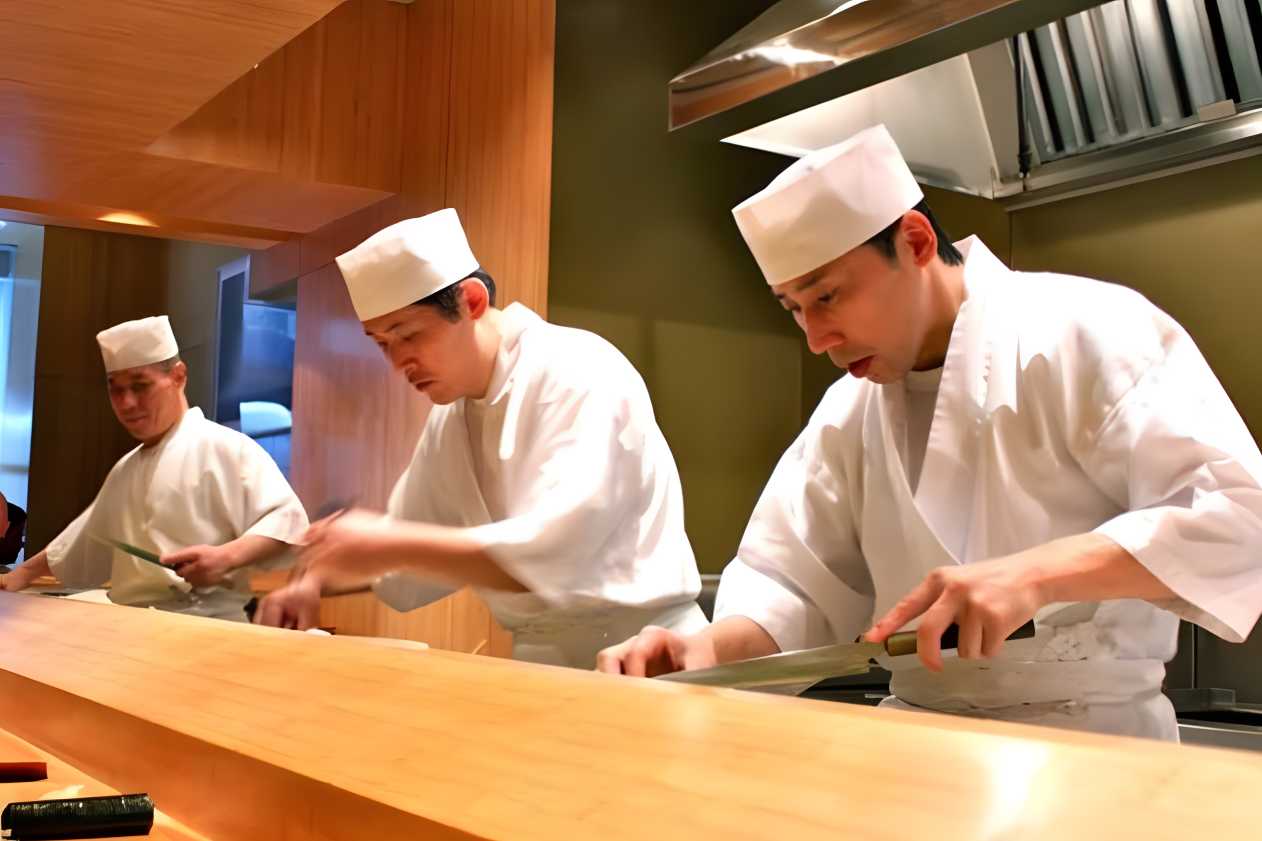 Wakiita means closer with the chopping board. Nonetheless, while they are close to becoming a sushi chef, it will still take a lot of training and years before wakiita works as an Itamae.

Responsibilities of wakiita include grating ginger and preparing fish, scallops, and wasabi. Sometimes, you will find a wakiita preparing sushi for take-out orders. A wakiita, being a trainee, is trusted with many tasks in the sushi kitchen.

Also, suppose an Itamae permits the junior sushi chef to use a sushi knife. In that case, that means that this apprentice is ready to become a sushi chef finally.

4. Giving Birth to a New Itamae

Finally, after years of apprenticeship and challenging training, the student will become a sushi chef. Being appointed as an Itamae, the new sushi chef will make his art and style of handling ingredients. Also, he will now learn how to use his knife.

The new sushi chef should also learn to interact with customers comfortably. Also, he should develop a good relationship with the staff in the sushi kitchen by now. 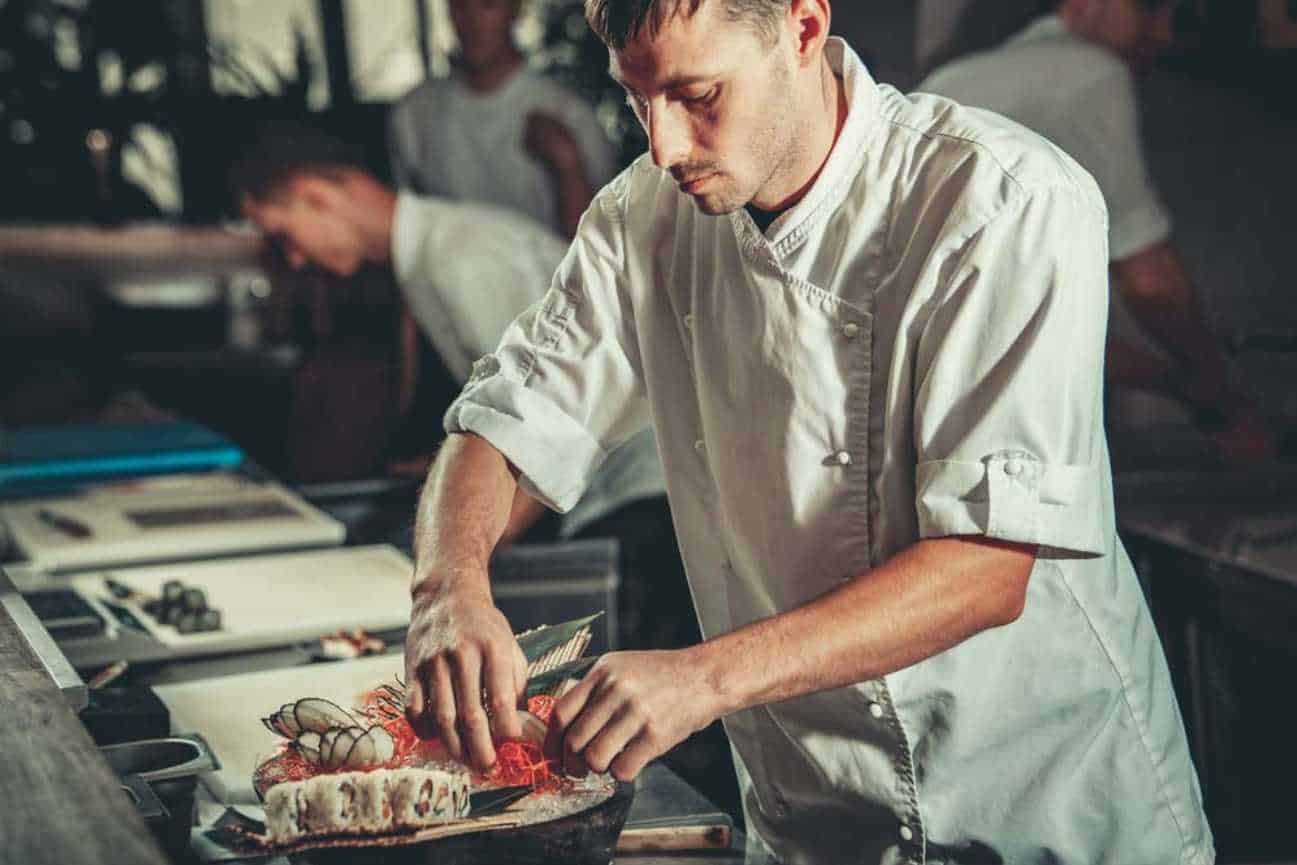 But becoming an Itamae will not stop there. Usually, it will take about four to five years to start working on pricey fish such as tuna. Further, a sushi chef can work on nigiri in the seventh year.

And in the tenth year, a sushi chef will earn the esteemed title of ‘Itamae-san’ or sushi legend. By this time, a sushi chef can create perfect hand-pressed sushi with sushi rice and grains rolled the same way.

How Long Do It Takes to Become a Sushi Chef?

What are the Responsibilities of Sushi Chefs? 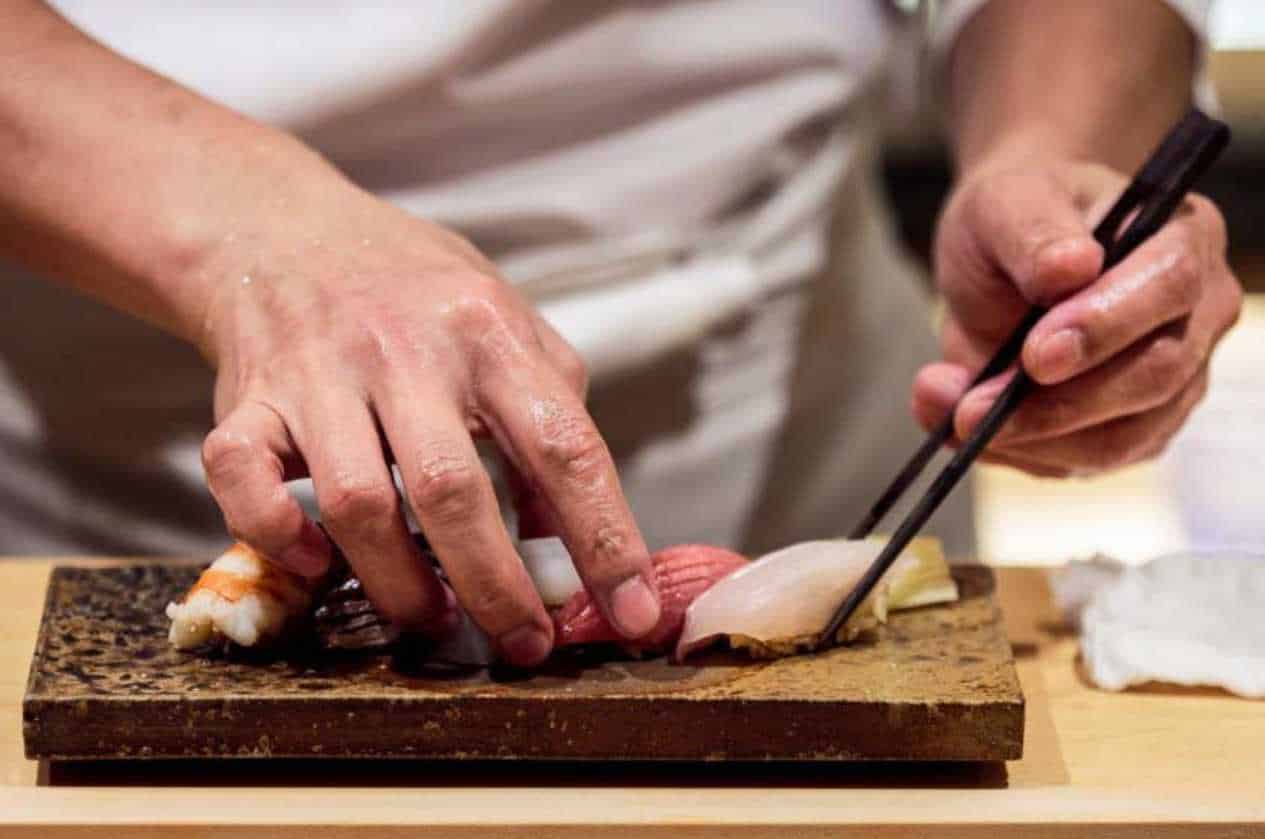 Being a sushi chef does not stop with being in the kitchen all the time. An Itamae also has other duties and responsibilities they must fulfill. Here we list down the tasks of sushi chefs.

What are the Skills of Sushi Chefs? 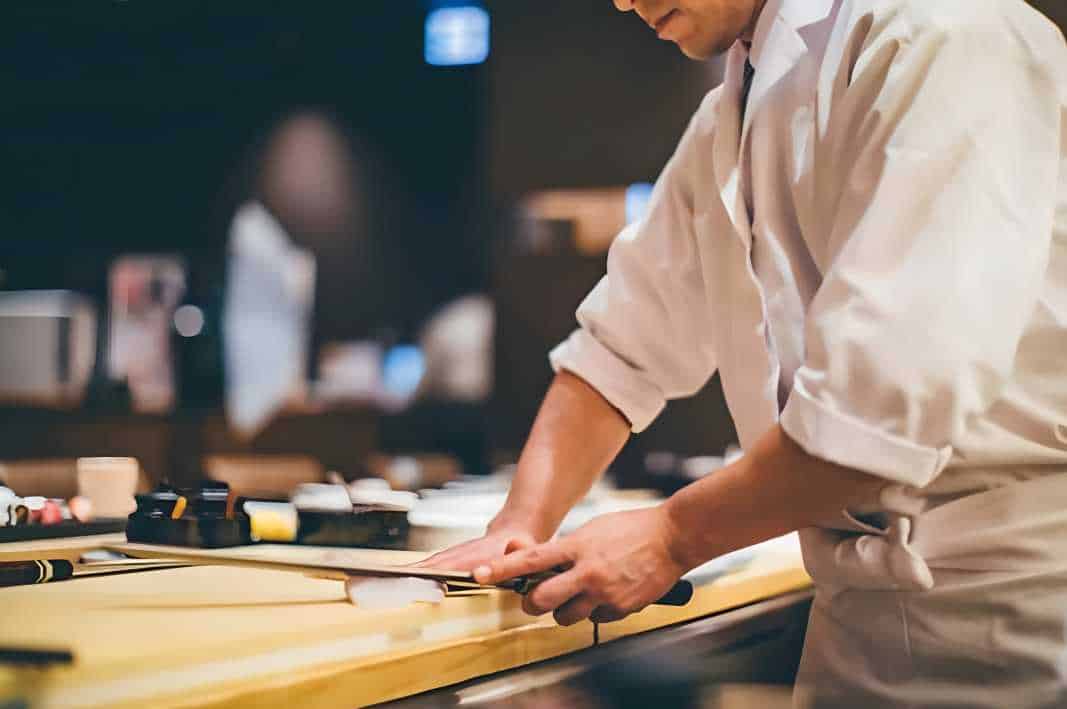 Expert knife skills are necessary to prepare and make perfect sushi rolls. Also, knowing how to clean fish properly is a must-have skill for every sushi chef. Finally, completing the years of training does not end there.

A sushi chef must learn how to improve his craft as years pass by. He needs to know how to create formed rice cakes. He must also know the proper balance of vinegar and rice and how it will blend with the raw fish served.

Along with that, consistency and precision skill are essential to the taste of sushi rolls. Further, knowing what type of ingredients will blend well together is the most critical skill that a sushi chef must learn.

Here we list the skills that a sushi chef should have.

A knife is one of the tools of the trade of every sushi chef. At first, a sushi apprentice must learn first how to cut the garlic, ideally 1/16 of an inch. After that, the master chef will allow the apprentice to start cutting seafood.

Sushi chefs must know at hand what fish is available for every season. On top of that, they should see fish that are of high quality. Also, sushi chefs should learn how to best store and slice fish accordingly.

Every sushi chef knows that the foundation of sushi is none other than rice. So, a sushi chef must have the ability to make perfectly formed rice.

Handling a knife requires style. On top of that, a sushi chef must move quickly but with grace. Because of this, a sushi chef should have the talent to make sushi with consistency and speed.

One of the soft skills that a sushi chef must have is courtesy. As you can relate, sushi chefs usually work in open kitchens to serve their customers directly. For this reason, sushi chefs must be excellent communicators and entertainers.

So, what do it takes to become a sushi chef? The quick answer would be long training, determination, and hard work. Indeed, there’s no shortcut to becoming a sushi chef, even more, a sushi legend.

With every year passing by, sushi chef needs to master their craft more and more. So, the next time you go into a sushi restaurant, take the time to appreciate every sushi roll. After all, every sushi-making requires love, art, and time.