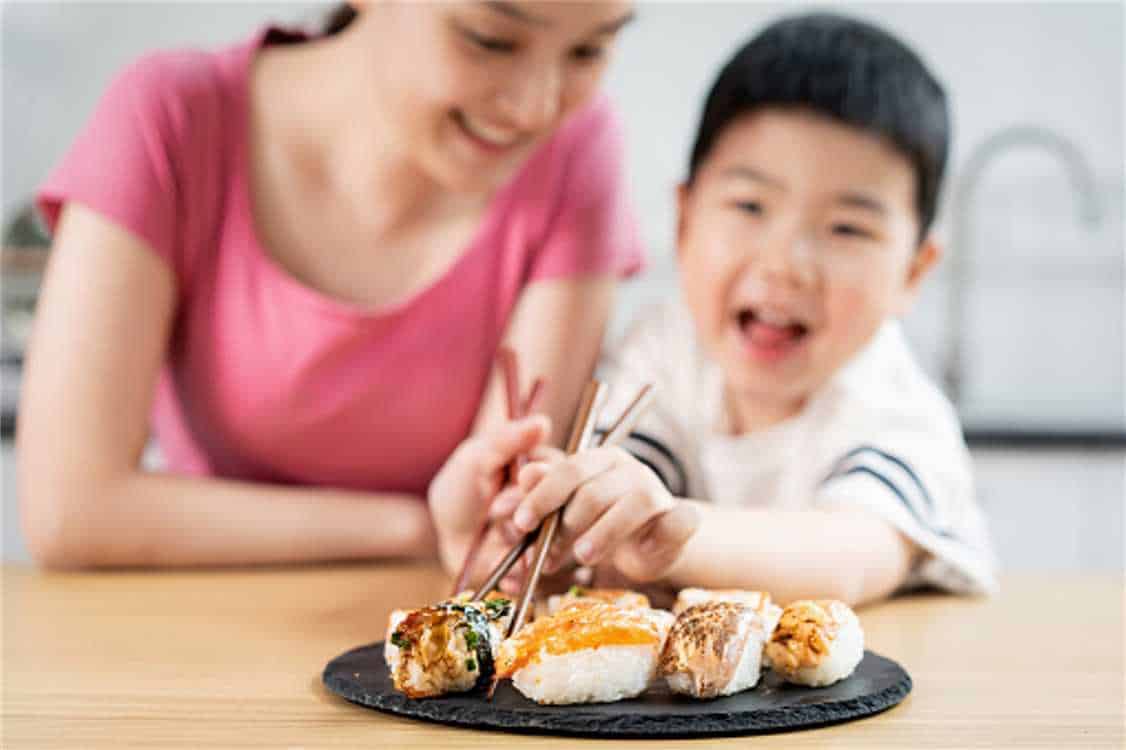 Do you enjoy Japanese food? Are you a sushi enthusiast? “Is sushi safe to eat?” you might think. Millions of individuals eat it every day without becoming sick.

Perhaps you’re worried about the uncooked seafood in most sushi rolls. Continue reading to find out if sushi is safe to eat for you and your family.

Is sushi safe for anyone? Many individuals believe that all sushi rolls consist of raw meat or fish. This misconception isn’t fair at all. Sushi appears in various forms. If eating raw food is too risky for you, you could select from several sushi alternatives.

Sushi is generally healthy and nutritious. The risks associated with sushi are small if food establishments follow proper processes. Also, it would be best if you eat responsibly.

Sushi chefs with adequate training are called Itamae. They know how to inspect, buy, keep, and handle rice and fish. They do this to reduce the risk of parasites and illnesses.

Restaurants and shops in the United Kingdom are required to freeze raw fish. They do this at -35°C for 15 hours or at -20°C for about 24 hours. This method of freezing destroys the parasites and makes fish safe to consume.

Sushi offered in supermarkets has been pre-made in a factory that has frozen any raw fish. Any restaurant that acquires ready-made sushi is in the same boat. 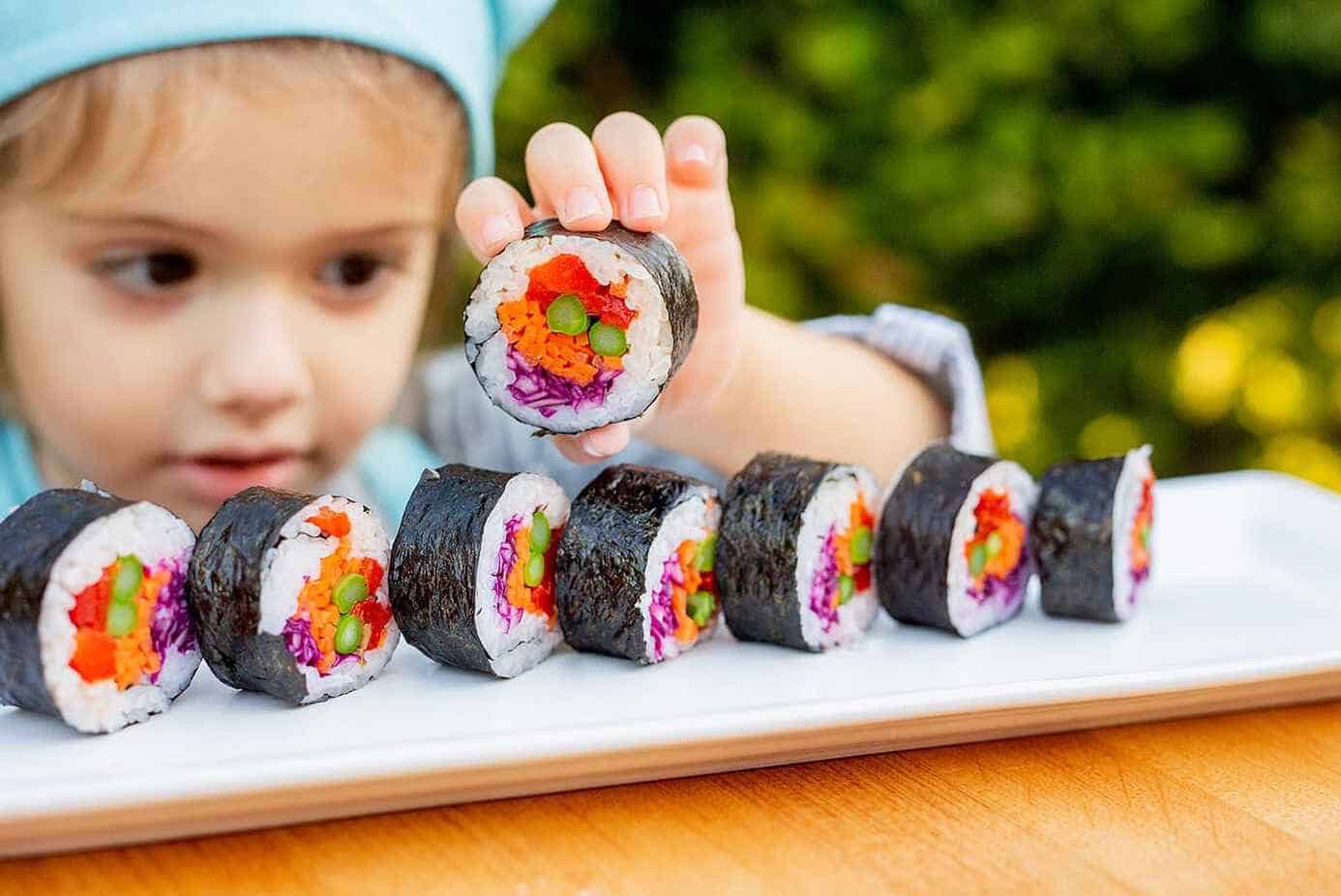 However, sushi with raw fish is not suitable for specific individuals. These people should not take the chance. They are senior citizens, children, those with compromised immune systems, and pregnant women.

People with weakened immune systems should avoid eating some form of sushi. Any remaining germs could quickly overrun the body when it is vulnerable.

Furthermore, sushi appetites are not restricted to pregnant women. They only have to make the proper decisions and limit their consumption. They can eat sushi-grade seafood and tuna once a week.

Sushi containing cooked fish and shellfish is safe to consume while pregnant.  Vegetarian sushi with components like avocado is also acceptable for expectant mothers. Raw fish or meat may contain pathogens that are harmful to humans. Uncooked seafood can order pathogens such as viruses, bacteria, and larger parasitic organisms.

Anisakis is one of the most common types. It induces a parasitic condition where people fall ill if the germ is consumed. It’s caused by eating fish contaminated with a parasitic worm.

The parasite sticks to your stomach, esophagus, or intestines. It can induce food poisoning.

Detectable anisakis parasites may be eliminated from fish. However, some may remain undiscovered. Food handlers must thoroughly freeze or cook fish to kill the lingering bacteria.

Sushi and smoked fish are also susceptible to listeria. Humans contract listeriosis from listeria. This pathogen is commonly found in raw, cured, or smoked fish and seafood products.

Listeriosis typically causes no symptoms or minor symptoms for only a few days. Signs may include chills, feeling ill, and diarrhea.

Diarrhea caused by salmonella infection can be dehydrating in some situations. Hence, it necessitates immediate medical attention. If the infection gets past your intestines, it might cause life-threatening consequences.

Bacillus cereus, a pathogenic microbe, is regularly detected in rice. Combining sushi rice with salt and vinegar reduces the acidity of the combo. This condition helps prevent germs from growing and producing toxins.

Most sushi fish, including tuna and salmon, are saltwater. Hence, they do not carry this risk. Nonetheless, ensure that the eel is appropriately cooked when included in unagi.

Therefore, restaurants with a superb rating most likely adhere to these rules. Their sushi is safe for you to ingest. Another concern associated with raw fish and meat is contaminants, like mercury. Mercury exists naturally in seas and oceans. The level detected in fish differs according to the species. The mercury content can also depend on where the fish was hauled.

Most fish don’t have enough mercury content to trigger grave harm. The health benefits of eating fish exceed the risks. Shrimp, salmon, and cod usually contain low amounts that can’t harm you if you consume them modestly.

However, tuna utilized for sushi often contains high amounts of mercury. This condition happens because they grow larger and live longer than other sea animals.

Hence, they build up mercury through time. Therefore, limit ingesting sushi tuna up to two times within a week.

Mercury poisoning can result in muscle wasting and memory problems. It can also lead to tremors, irritability, tingling, and numbness.

The millions of plastic particles floating in the world’s oceans are also contaminants. These particles are called microplastics. They form when bigger plastic objects like shopping bags degrade.

Marine fish like those eaten by humans can swallow synthetic particles. Species that attack marine organisms or other fish are prone to consume plastic. These include grouper, sharks, and tuna.

4 Tips to Ensure Your Sushi Is Safe to Eat

The health issues stated above are meant to inform you about the dangers of eating poor sushi. They are not intended to deter you from enjoying this nutritious food.

To ensure that you get your hands on good sushi, all you have to do is trust your instincts. Use your senses of sight, smell, and touch. Here are four tips to keep you safe. No matter how terrible your appetites are, always check out the place’s reputation. Only eat sushi at reputable establishments with competent and well-trained employees.

When a restaurant is busy, you can ensure that sushi is in high demand. Hence, they’ll always have sushi-grade or fresh fish on hand. They will also never try to tarnish their reputation by offering lousy sushi.

Popular sushi restaurants employ trained chefs. They understand how to handle raw fish to avoid any health hazards properly. They can invest in a commercial-grade fridge. This equipment helps to keep their significant demand for raw fish.

A smelly restaurant implies that it isn’t handling raw seafood properly. Avoid dining at such establishments.

2. Use your senses to spot sushi-grade seafood

Trust your senses! Determine whether the sushi roll on your table contains good or terrible fish.

Sushi-grade seafood retains its brightness. It will not have a fishy odor. The fish will melt in your mouth as you chew. If your sushi smells or tastes strongly of the sea, the fish is probably not sushi-grade.

Finally, you can use also use the test of touch. The flesh bounces back when you press your finger against sushi-grade or fresh fish. It reclaims its shape almost instantly. However, if the fish has gone rotten, an indentation will remain in that spot. When shopping for fish to create your sushi, play your cards well. You could cause health concerns for yourself and your family if you make one mistake. So, buy sushi-quality fish from a reputable fishmonger. He knows the concept of sushi grade.

Ask as many questions as you want. The following are some questions to consider:

Store the fish in the coldest section of your freezer if you don’t plan to create sushi right away. Home freezers aren’t as powerful as commercial freezers. So, use the fish as soon as possible.

The health concerns connected with sushi are related to the ‘raw fish,’ not the sushi itself. You can request a combo of cooked and raw sushi to reduce your raw fish intake.

What if you’re new to sushi and don’t want to eat raw fish? There are plenty of veggie sushi options to pick from. Many restaurants provide veggie or vegan sushi. These meals may include carrots, shitake mushrooms, tofu, and sweet potato.

Would you like to cook your sushi? Consider a veggie roll instead if you aren’t sure where to get sushi-grade ingredients.

Is sushi safe to eat? Sushi is a delicious and nutritious dish. However, pregnant women, children, and the elderly should exercise caution when eating sushi.

The raw fish or seafood may contain germs or contaminants if not properly handled. Stick to the vegan or veggie rolls if you’re unsure.