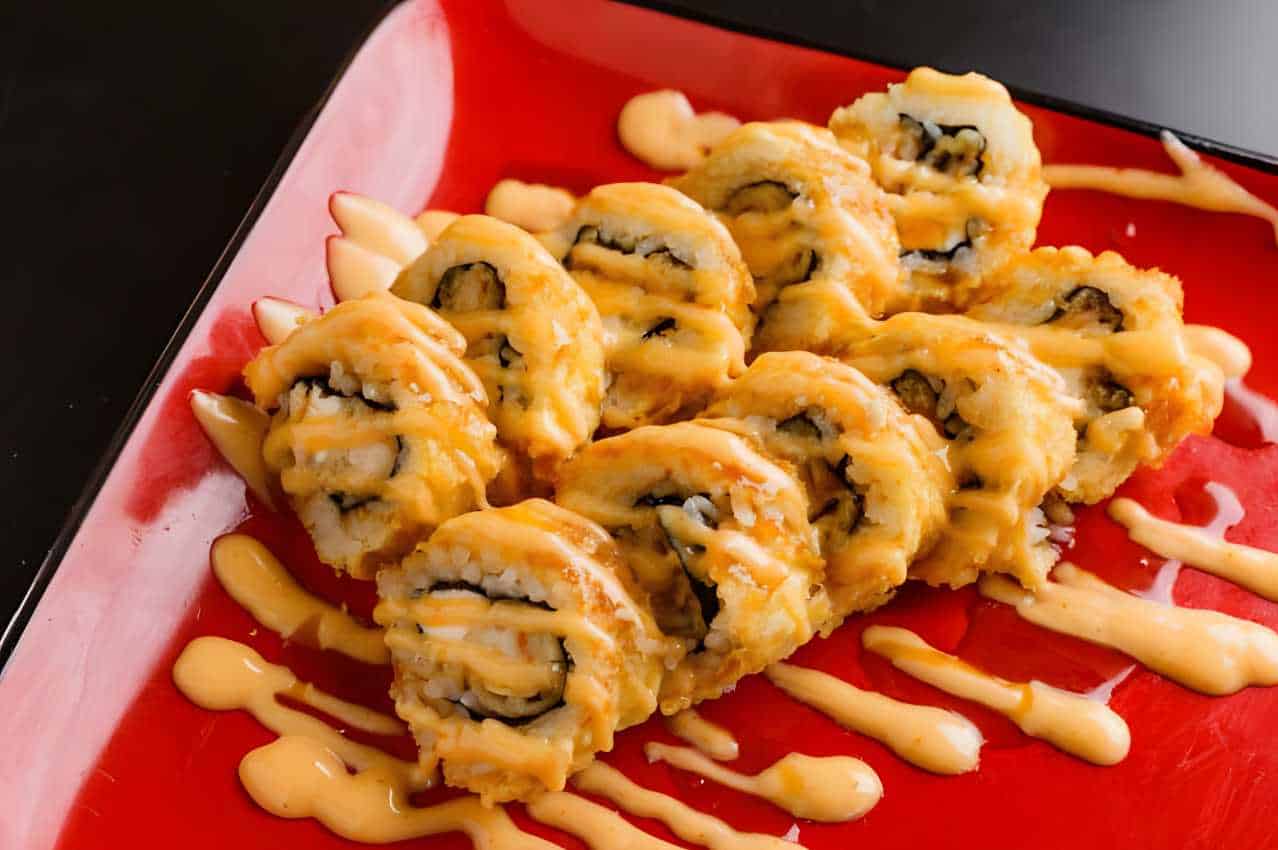 Many people associate sushi with raw fish. Truthfully, the Japanese cuisine made with raw meat is called sashimi. Sushi may or may not be cooked, but it will always be served with vinegared rice.

As with most foreign cuisine, it has been adapted to modern American tastes. That includes deep fat frying, also known as tempura. Here are a few fried sushi recipes you might like to try.

The Cali roll is a perfect example of East meets West in modern sushi. It is also an example of uramaki, a roll with rice instead of seaweed on the outside. The interior is crab (real or imitation), avocado and cucumber.

Some people call it a Philly roll if you take the option of cream cheese. This recipe calls for the oil to be super-hot so that it shouldn’t take very long to fry.

If you’re feeling adventurous, here’s a recipe for deep-fried sushi that calls for masago. This is the roe of a capelin, a fish that favors cold ocean waters. The masago, the salmon fillet and the asparagus will make a dish that is low calorie and nutritious. Tempura batter and panko make this dish crispy and flavorful on the outside.

I have decided to call these particular sushi rolls “NC rolls” after North Carolina, where the sweet potato is the state vegetable. To balance out that sweetness, the recipe calls for wasabi paste.

Your throat and nasal passages will be nice and clear after eating this! This recipe calls for a traditional wrap, with seaweed on the outside.

This recipe mixes imitation crab and shrimp together and adds bell peppers in case you need some more veggies in your diet.

The chef behind this recipe prefers “eyeballing” to exact measurements and so should probably be attempted only by experienced chefs who don’t mind playing a little fast and loose in the kitchen.

These rolls call for shrimp tempura and spicy mayonnaise. You can batter and fry the shrimp yourself or buy it already prepared. The cream cheese and avocado bring enough coolness to balance out the spicy sriracha in the mayonnaise drizzled on top of the finished rolls. You can deep-fry this or pan fry it.

You’d think a sushi roll that calls for jalapeños would be called a Texas roll or a Mexican roll. Then again, cooking with tempura battered jalapeños is a bit of a gamble!

(Almost as big a gamble as making sure that pesky enye is where it should be.) The odds will be in your favor if you remember to wash your hands after handling raw jalapeño.

Here’s a fried sushi recipe for vegetable lovers. To make it truly vegan, it will need to be fried in canola or peanut oil.

(Most other plant-based oils are better suited to pan frying than deep-frying.) This particular recipe calls for carrots and cucumbers, but if you feel experimental you can add any vegetable cut into two-inch wedges.

The chef behind this recipe recommends sesame oil. It is not as neutral flavored as most recommended deep-fry oils, but it does add an interesting aroma and crunchy texture.

The most singular ingredient in this recipe is mango slices, which should give it a sweet and fruity flavor to contrast with the rich and savory flavor of salmon.

The Japanese word for a tuna roll is tekkamaki. This recipe suggests sea bass or salmon as substitutes. Of course, that’s not strictly tekkamaki but suzuki and sakemaki respectively.

Cream cheese mixed with wasabi paste should prove to be an interesting contrast of flavors. Just one minute in an oiled wok will have this tekkamaki fried to a golden brown.

If your tastes are a little rich and you’re feeling ambitious, try this recipe that calls for lobster tail. This recipe suggests sieved boiled egg yolk and chives as a garnish.

It will be a protein rich dish with a satisfyingly savory flavor. Deep-frying is not a usual method for cooking lobster, but it may be just right for the adventurous sushi aficionado.

If you prefer your fish cooked, try lightly grilling it before making it into sushi rolls as this chef suggests. She also puts spices (paprika and what appears to be cumin) in the tempura batter.

Thinly slice avocado accompanies the grilled salmon. A dusting of panko makes this fried sushi extra crispy in texture. A soy sauce for dipping is the perfect serving for this dish.

This one recommends strips of baked chicken, asparagus and cream cheese but suggests that it can be filled with whatever ingredients you like.

If you can’t have milk in your batter, try this tempura recipe that calls for seltzer water or club soda instead. It will create an airy yet crispy texture to the outside of your fried sushi.

These go a bit beyond your typical Cali roll by throwing in a little ebi, which is what sushi chefs call shrimp. Imitation crab is suggested but you can use the real thing if you like.

In case you’re wondering, imitation crab (sometimes spelled krab,) is called surimi by sushi chefs. It is made with miscellaneous fish flesh that has been deboned and the fat removed before being minced into a fine paste.

This seems to be a simplified recipe for the basic Philly roll. Instead of crab/crab salad, avocado and cucumber with cream cheese, it’s cream cheese with salmon.

It could be raw or cooked, but this looks like they used minced cooked salmon. The maki are coated in egg, flour and panko and fried to golden brown. The sliced maki can be topped with Tari sauce.

Here’s something that’s been fried twice. The filling is shrimp tempura with cucumber and avocado and the whole maki is battered and deep-fried. Leave the tail on to make it really look like a stick of dynamite!

If you fry your own shrimp tempura, remember to wave the stretched-out shrimp back and forth as you place it in the oil so that it stays straight and does not coil in on itself.

As with all cooking, your mise en place should be set up to start with. That means all of your tools and ingredients should be ready to go.  The rice used for sushi needs to have just the right balance of rice and vinegar. It may take some practice to get this just right.

When rolling rice into balls or maki it is a good idea to have your hands mildly damp. Get them wet and then clap them. That’s how damp your hands should be to handle rice. Remember to leave some space on your nori for overlap.

Keep portions in mind when making your sushi. Every piece of sushi should fit elegantly into the mouth. That means keep the pieces just bite size. The presentation should likewise be elegant.

The end rolls of the maki should be placed to display the filling. A serving dish of different types of sushi should be arranged in a pattern that is both attractive and practical.

When preparing sushi or, really any dish in general, it is good to keep in mind the concept of umami, a Japanese word meaning “essence of deliciousness”. Though the word is Japanese, the meaning behind it is universal.
It is the savory flavor of meat, vegetables, fish, aged cheese, mushrooms and many other foods. Learn how to best combine these foods for a dish that accomplishes umami, making the diner desire more.
The first sushi bar in the United States opened in Los Angeles in 1966. The Kawafuku Restaurant, run by Noritoshi Kanai and Harry Wolff, sold traditional nigiri sushi that was very popular with Japanese businessmen.
As the clientele expanded, that meant changing up sushi a little. It is still evolving. Fried sushi recipes are an example of nouveau sushi and something you may enjoy.